By: Jordi Vives i Batlle
For: String quartet
This music is in your basket
View basket
Loading... 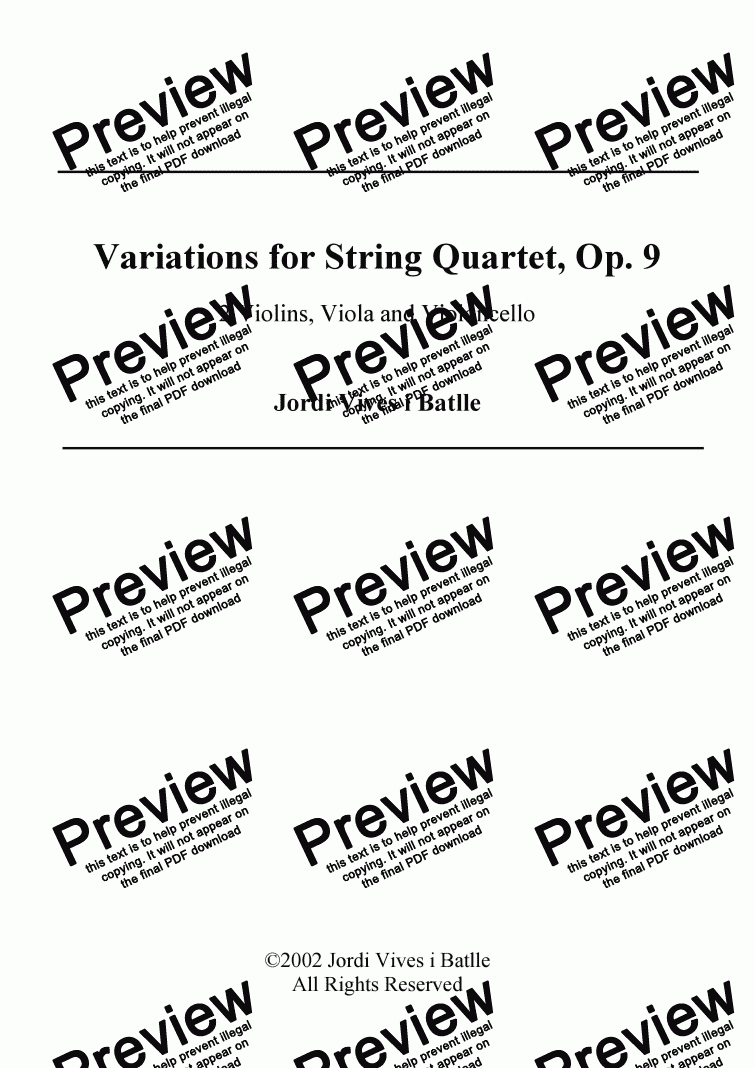 By: Jordi Vives i Batlle
For: String quartet

Composer
Jordi Vives i Batlle
Year of composition
2002
Lyricist
none
Difficulty
Difficult (Grades 7+)
Duration
5 minutes
Genre
Modern classical music
License details
For anything not permitted by the above licence then you should contact the publisher first to obtain permission.

Moreover, note durations are also serialised. I have established a ?series? of 12 durations from a semiquaver (1), adding an extra semiquaver length to each subsequent duration value, up top to a dotted minim (12). I have then taken it in the same order as the pitch series (10 - 11 - 5 - 6 - 12 - 9 - 3 - 7 - 4 - 1 - 3 - 2) and assigned to every pitch the corresponding duration belonging to it. It is possible to lengthen or shorten the presentation of a rhythm series in any instrument part several times by successive augmentation and diminution. This sort of rhythmic organisation is inspired by Messiaen's piece Mode de Valeurs et d?Intensites (1949), particularly the concept of rhythmic modes employed by this composer.

The result of adopting a series of ?chromatic durations? is that the music is rhythmically complex and the feeling of metre is as irrelevant to the piece as the feeling of key (dispersed through the serialisation of the chromatic scale). That is why I have substituted barlines by dotted lines every two minims? worth of time, meaning nothing more than reference points for rehearsals. Although pitch and duration are both serialised, note that I do not use the whole prescribed duration for each note. This would inevitably yield to a thickly packed texture. Instead, I allowed the notes to be of any length up to the value of the prescribed note, the rest being filled with silences. What is adhered to is that each new note is played exactly at the prescribed moment determined by the duration of the previous note-plus-silence compound. It is easy to justify this on the grounds that the memory retains the effect of any note played until the next note occurs, even if there were rests in between, so that rhythmic serialisation is not really broken.

Another principle that I have adopted in order to avoid monotony is that durations can be distributed vertically as well as horizontally, provided that notes in any part start in an order of sequence as prescribed by the series. In the slow adagio the music is disposed so that each note is put in the nearest available gap, a sort of a horizontal game of Tetris, to use a visual example. I found it very practical to use graph paper representing notes as rectangles of different length when composing in this way.

There has been much more work in this piece than presented in the finalised score. I experimented with different things when writing each new variation, and I only selected those variations of a larger set that I thought worked musically and followed each other logically. Additionally, although pitch and duration are serialised, the method of shortening the musical notes at will has given me much more freedom for generating (short) themes and motifs than I had anticipated. I could determine with great freedom which and how many notes form chord clusters at any given time.

Dynamics, expression, attack, phrasing and bowing are not serialised in this piece, although sequences of dynamics follow certain orderings and in some cases I have ?inverted? or ?reversed? dynamics when playing the series in retrograde or inversion. This, plus the customary options of usage of different registers, gave me a surprising amount of freedom making many decisions along the way whilst bringing up my serial texture. In anticipation of the inevitable criticism that this type of music may be too mathematical, I sustain that I feel refreshed in having found new ways of expression. I cannot wait to explore further this way of composing, in addition to continue in parallel with my tonal works.

A final note on playability. This score is difficult to play because of the many complex rhythms, meaning it may be hard to tackle by a not very experienced ensemble. However, this music is not unplayable as one of the reviewers seems to suggest (I have got several professional opinions confirming playability). I advise listening to the individual parts and playing them separately while the memory is still fresh, before putting it all together. I am not obsessively rigid with regards to the notation. Players should focus on bringing the different musical events to light rather than wanting to play things exactly as written. The score is just an ideal that should be approached but not followed blindly. The most important thing is expression. Despite the structural details referred to above, this is essentially a dramatic work, and it has a concealed emotional programme that can be realised by intuition. Performers are encouraged to think mainly about this if they attempt to tackle this music.