By: Keith Otis Edwards
For: Orchestra
This music is in your basket
View basket
Loading... 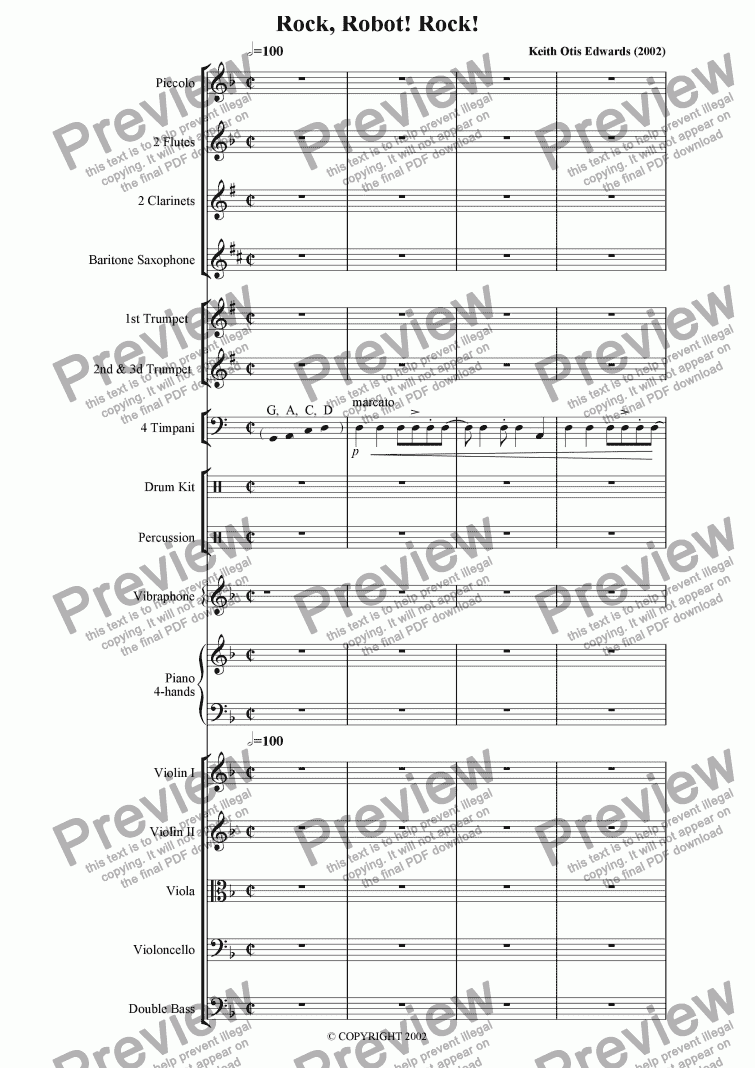 By: Keith Otis Edwards
For: Orchestra

Composer
Keith Otis Edwards
Year of composition
2002
Lyricist
Keith Otis Edwards
Difficulty
Difficult (Grades 7+)
Duration
5 minutes
Genre
Rock and Pop music
License details
For anything not permitted by the above licence then you should contact the publisher first to obtain permission.

This piece is a soundtrack for an imaginary ’60s sci-fi B-movie (with washed-out color) about robots vs. the go-go vixens.

The word robot was coined by Karel Capek for his 1920 play RUR, and for about a half-century afterward, robots were conceived of as anthropomorphic beings. Unfortunately, when real robots began appearing on assembly lines, they turned out to be nothing but hydraulic cylinders, solenoids, limit switches, hoses and couplings. Ugh! What the world really wants is the old anthropomorphic robots who speak in monotones. This music is an attempt to bring them back!

The scene is from the climax of the movie. The large, metallic robots have run amok and threaten to take over London! Fortunately, the swinging vixens (all with pastel lipstick, excessive eye make-up, big hair, white leather mini skirts and go-go boots) save the day by teaching the robots how to rock! The movie causes a mod sensation, and a new dance craze, The Robot (use your imagination), takes over discotheques.

The feature article of the September, 2006 issue of [i]Popular Science[/i] has a history of robots which reads almost identical to my song description above – so much so that a friend suggested that I sue them for plagiarism. "Wouldn’t work," I replied. "Their magazine has no diminished fifths or ninth chords."