By: Dave Elliott
For: Solo Voice + piano
This music is in your basket
View basket
Loading... 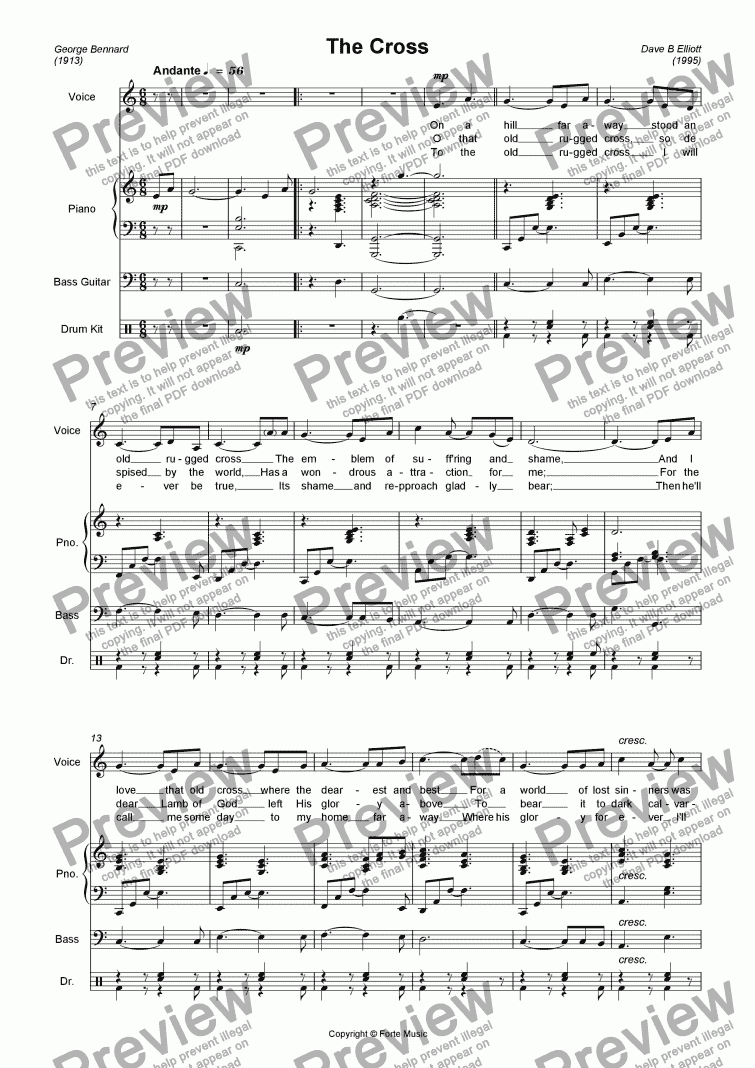 Composer
Dave Elliott
Year of composition
1995
Lyricist
George Bennard
Difficulty
Easy (Grades 1-3)
Duration
4 minutes
Genre
Other
License details
For anything not permitted by the above licence then you should contact the publisher first to obtain permission.

I was asked to take part in the upcoming Good Friday service by singing a solo. Faced with a limited repertoire, and particularly a song that was new and original, I decided to study the Hymn book to see what ideas he could get.

The song, The Old Rugged Cross, was one that previously wasn’t a favourite, particularly based on years of continually playing the traditional melody as a favourite of so many people. However, on this particularly occasion, on reading the words, properly for the first time, I fell in love with the song, and then had to attempt to write a new melody.

I was very conscious of the traditional of the song, and so tried to be careful not to move away from the passion of the song.

Written primarily as a male solo, it can just as easily be used by a female. It has also been used as a male voice choir arrangement.

Alternative accompaniment has been used with either a nice warm string ensemble background, or a brass band; both of which played block chords as a background for the chorus.

The arrangement is quite flowing and can have a gentle rhythm, but needs the pace to be slow and steady.

Volumes are a guide only; the last verse might suit a different sound with the more powerful words.

Reviews of The Cross

Sorry, there's no reviews of this score yet. Please .
In order to submit this score to ScoreExchange.com Dave Elliott has declared that they own the copyright to this work in its entirety or that they have been granted permission from the copyright holder to use their work. If you believe that this score should be not available here because it infringes your or someone elses copyright, please report this score using the copyright abuse form.