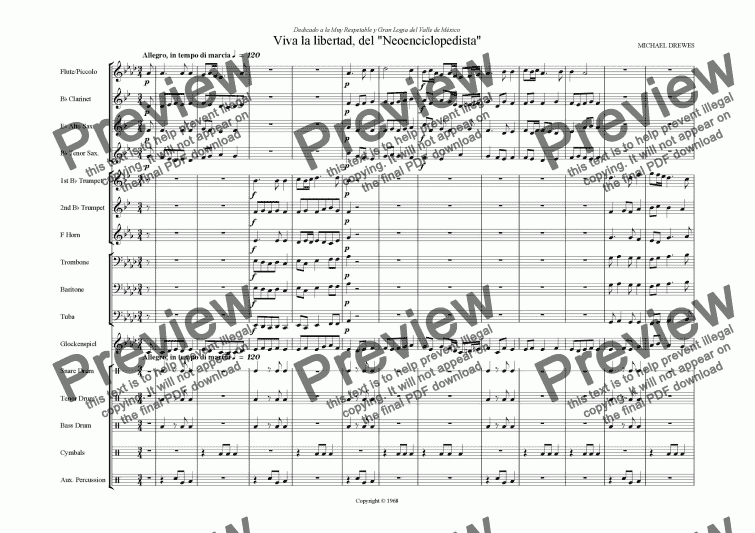 Price:
(+ VAT when applicable. Price is for score onlyPrice is for score and complete set of 16 parts)
Note: The publisher requires a minimum purchase of 1 licenses
Change currency...
You are purchasing high quality sheet music PDF files suitable for printing. You are purchasing a this music. Be sure to purchase the number of copies that you require, as the number of prints allowed is restricted.

In the late sixties I saw an ad in the Mexican newspaper Exc�lsior for a composition contest. They asked for a small piece, which could either be a song or a march related to the theme of the Mexican Independence, to be presented as a piano reduction. So I chose the latter and sent it off under the pseudonym "El Neoenciclopedista," The Neo-Encyclopedic. Much later I was surprised to receive an invitation to a ceremony at the Masonic lodge Muy Respetable y Gran Logia del Valle de M�xico, and, once I was there, I learned that it was about this contest. There were military bands playing in the vestibule of the lodge, and then, the winners were announced. I was not among them. How could I if I did not even know that a march had to be in 4/4 or 2/4 and not in a 3/4 beat as I presented it! Since the piece would not work as a march, I present it now under the title: Viva la libertad, del "Neoenciclopedista."