By: Composed by Keith Terrett
For: Concert band / wind band
This music is in your basket
View basket
Loading... 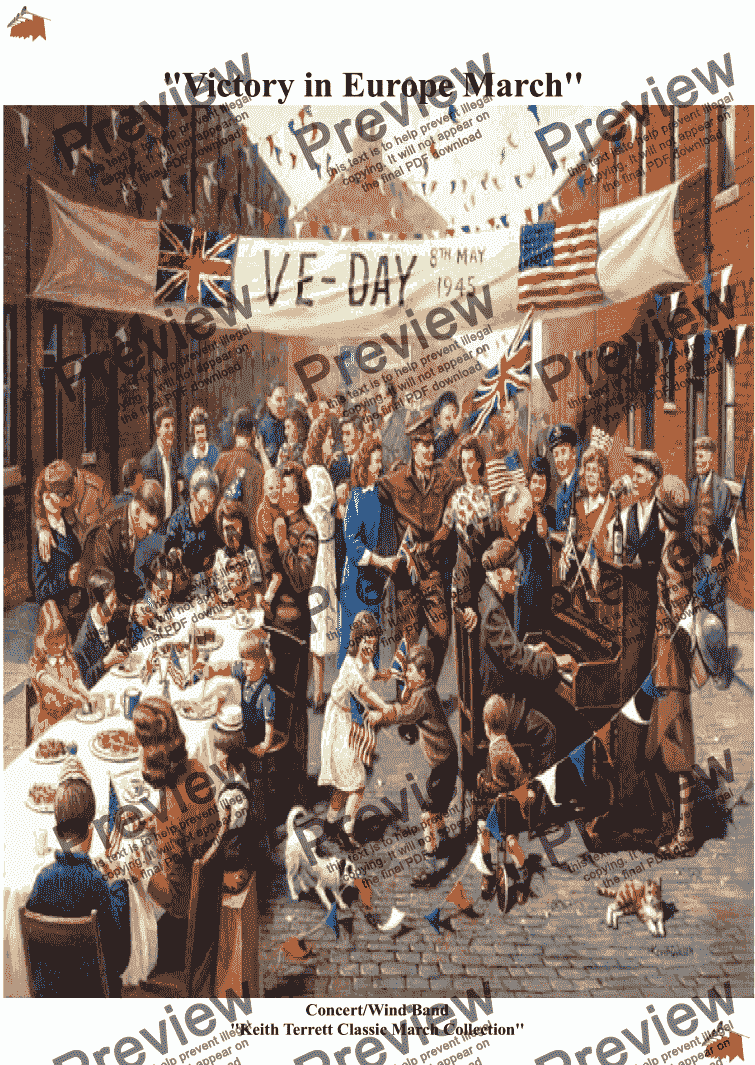 By: Composed by Keith Terrett
For: Concert band / wind band

Composer
Composed by Keith Terrett
Year of composition
2009
Publisher
Music for all Occasions
Difficulty
Moderate (Grades 4-6)
Duration
4 minutes
Genre
Other
License details
For anything not permitted by the above licence then you should contact the publisher first to obtain permission.

VE Day - or 'Victory in Europe Day' - marks the day towards the end of World War Two (WW2) when fighting against Nazi Germany in Europe came to an end. On 8 May 1945, Prime Minister Winston Churchill made an announcement on the radio at 3pm that the war in Europe had come to an end, following Germany's surrender the day before.

Why it’s Important: VE Day is a national holiday in many of the former allied countries. It commemorates the day the Allies formally accepted the unconditional surrender of the armed forces of Nazi Germany. It is a very important holiday for most nations, as it marks the end of the Holocaust and Hitler’s Nazi regime. How did VE Day happen?

How did VE Day happen: Victory in Europe Day, generally known as V-E Day, VE Day or simply V Day, is celebrated on May 8, 1945 to mark the formal acceptance by the Allies of World War II of Nazi Germany's unconditional surrender of its armed forces. The formal surrender of the German forces occupying the Channel Islands did not occur until the following day, May 9, 1945.

8 May 1945 – VE (Victory in Europe) Day – was one that remained in the memory of all those who witnessed it. It meant an end to nearly six years of a war that had cost the lives of millions; had destroyed homes, families, and cities; and had brought huge suffering and privations to the populations of entire countries.

Millions of people rejoiced in the news that Germany had surrendered, relieved that the intense strain of total war was finally over. In towns and cities across the world, people marked the victory with street parties, dancing and singing.

But it was not the end of the conflict, nor was it an end to the impact the war had on people. The war against Japan did not end until August 1945, and the political, social and economic repercussions of the Second World War were felt long after Germany and Japan surrendered. VE Day March celebrates that triumph.

If you promise to record this march on Youtube, I will send you a free set of parts and a score.