By: Philip R Buttall
For: Solo Oboe + piano
This music is in your basket
View basket
Loading... 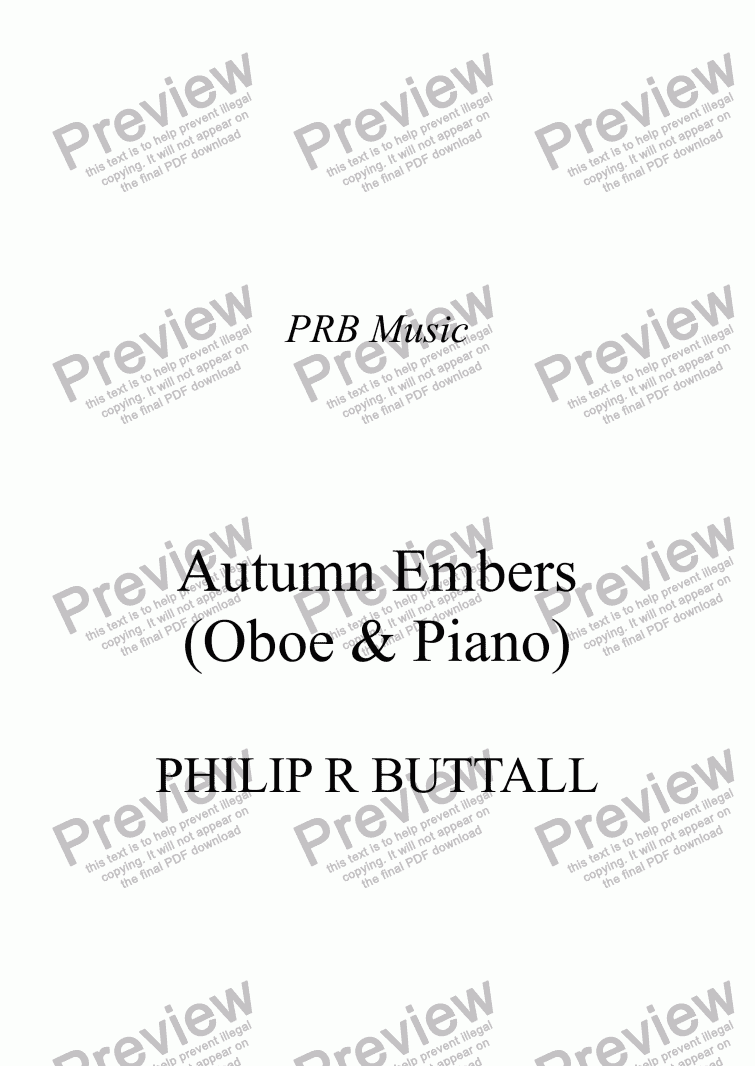 Composer
Philip R Buttall
Year of composition
2006
Publisher
PRB Music
Difficulty
Moderate (Grades 4-6)
Duration
3 minutes
Genre
Classical music
License details
For anything not permitted by the above licence then you should contact the publisher first to obtain permission.

This was originally titled A Simple Andante, and written for solo guitar. It is dedicated to guitarist, Alison Smith, who premiered the work at her recital in Plymouth in April, 2002. It does need, however, an excellent guitar technique, and as such cannot be described as ’simple’. On hearing her perform it so successfully, I feel that our idea to rename it Autumn Embers very much captured the nostalgic sentiments expressed.

I have already been asked to arrange it for piano solo, as well as produce a version for small orchestra. A short while back, I received a very nice email from Alison McCree, secretary of the Dunbartonshire Concert Band, from the Greater Glasgow Area of Scotland, to say how much she liked this particular piece of music.
Alison is also an oboist in the band, and as the orchestral version features a solo oboe, it seemed the obvious thing to do to make a version for oboe and piano, which I have now done, and dedicated to Alison, whom you can see in the attached photo (middle of the front row, to the left of the conductor).
The particularly lyrical sound of the instrument on the accompanying MP3 file is, of course, courtesy of Garritan Personal Orchestra - Sibelius Edition. The piece is certainly not too challenging for the younger player, and I’ve put in some welcome breathing-places along the way!
Alison has since been back in touch to say that both she, and her oboe teacher, like the piece very much, but would actually prefer it a semitone higher, in B flat. The original key of A was largely dictated by the guitar version, and which transcribed nicely for strings. I have ’allowed the piece to be transposed’, so please do feel free to take advantage of this option, if the semitone rise makes it better - I’m no oboist!