By: unknown
For: Military band
This music is in your basket
View basket
Loading... 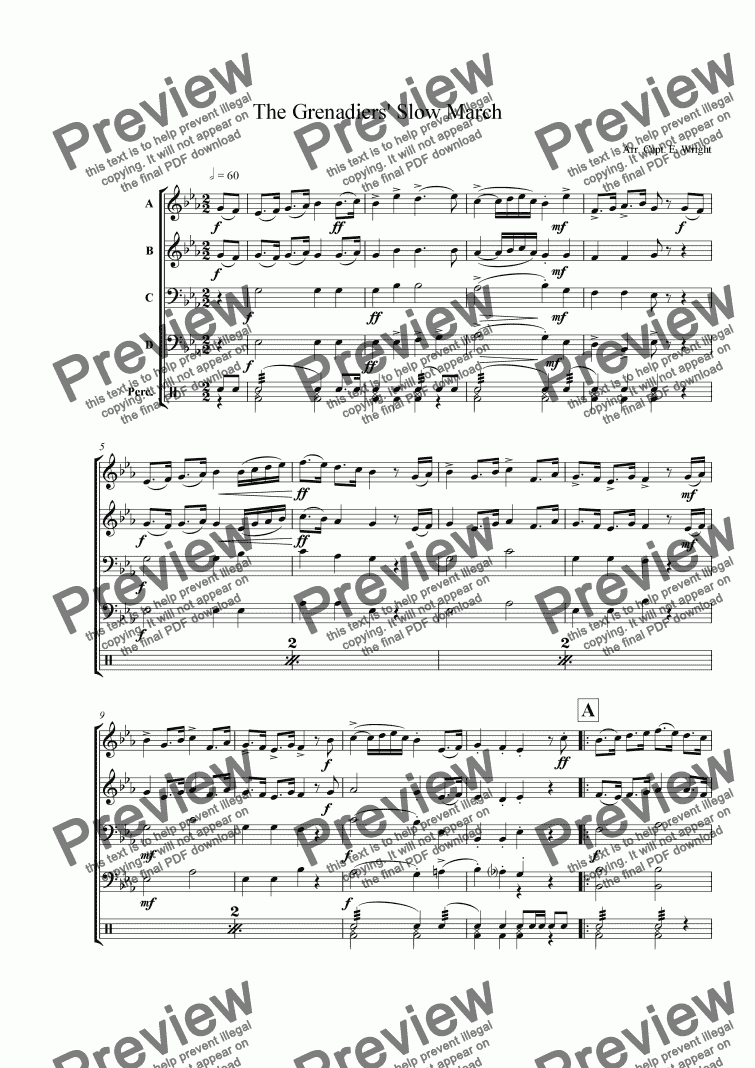 By: unknown
For: Military band

Composer
unknown
Arranger
Elliot Wright
Year of arrangement
2012
Difficulty
Easy (Grades 1-3)
Duration
2 minutes
Genre
Other
License details
For anything not permitted by the above licence then you should contact the publisher first to obtain permission.

The Grenadiers’ Slow March is used by the British Grenadier Guards, most prominently during the ceremony of Trooping the Colours, and when the guards return home from service overseas.

This arrangement is harder on the trumpets, due to the higher range, flexibility, and stamina being asked of them, which is more easily achieved by the flutes, piccolos and clarinets which double them.

The parts have been tailored to fit their respective sections. The musical director will notice, for example, that the ’A’ part for reeded instruments is very slightly different from that given to brass instruments, in order to accommodate the tonguing abilities of each. This does not preclude a musical director from the typical practice of (for example) strengthening the trumpet line by doubling its exact part to the clarinets; but the orchestration provided here gives, as a default, the option of an ’easier tonguing’ part for the reeded instruments. The additional option of a ’High’ version for clarinet parts ’A’ and ’B’ is also provided for more advanced players, and to add strength and colour to the melodic line – this is especially useful in groups with strong clarinets and less-experienced trumpets.

The piece is intended to be played all the way through, twice, with the repeats (as indicated by the ’Da Capo’ marking). However, by looping back repeatedly at the ’Da Capo’, the musical director is able to continue the piece indefinitely, making it useful for longer stretches of marching.

Reviews of The Grenadiers’ Slow March