The Hemlow March Past - Simplified Version

(or "The TACSTC March Past")

By: Elliot Wright
For: Military band
This music is in your basket
View basket
Loading... 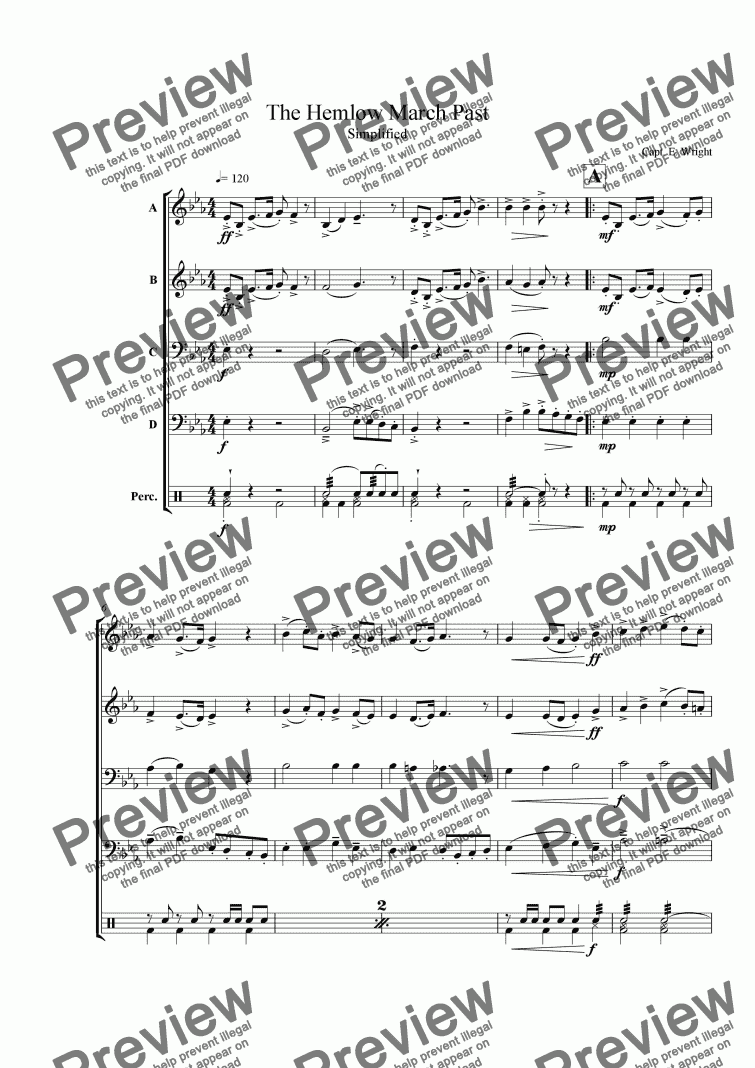 The Hemlow March Past - Simplified Version

(or "The TACSTC March Past")

By: Elliot Wright
For: Military band

The “Hemlow March Past” was dedicated to the Trenton Air Cadet Summer Training Centre in 2010, but it was first written in 2008 for 800 “Black Forest” Squadron (Royal Canadian Air Cadets) in Mississauga, Ontario. It is named after Jason Hemlow, a former cadet from the unit. The composer used an encoding system to write the names of several other friends and role models from his time as an air cadet, into the melodies of the piece. In fact, the first nine notes of the introduction section (at least according to the composer) are an encoding of the words “Air Cadets”.

When the band at his home unit found the first version of the piece too difficult, Wright brought it to the Trenton CSTC in 2009 to test it out on the training centre’s cadet band. Some adjustments and revisions were made (not the least of which was the dedication, now to the Trenton CSTC), and the piece was brought back the next year. It was first publicly performed at a graduation parade on 23 July 2010, before the CO, LCol David A. Wright (of no relation to the composer), and members of the OPC.

The piece was written to mimic the form of the “RAF March Past”, featuring a mirrored 4-bar introduction and Coda, as well as a soaring ‘airforce-style’ trio section, and thus lends itself to similar uses as its source.

This “simplified” version has shortened the form of the original piece, and takes advantage of the A-B-C-D format to make it easier to issue and play. This does, however, make it mostly incompatible with the “Orchestrated” 2010 version. It is still flexible enough, though, to be played in different ways, to suit various applications:

Standard Version: The “Simplified” version is intended to be played normally by performing it from beginning to end, without the optional “Da Capo”.

Extended Version: The optional “Da Capo” marking can be used to loop the piece indefinitely, but is best used only once. During the second time through, the repeat sign at rehearsal mark “B” may be used or ignored at the DMus’ discretion.

The Advance: This is done by performing the final 4 bars of the piece (15 paces), or the final 2 bars (7 paces), depending on the length of the advance. Condensed Version: Used for mess dinners, this version is performed by starting from the beginning and playing (without repeats) until rehearsal “C”.

Reviews of The Hemlow March Past - Simplified Version