By: Gottfried Piefke
For: Military band
This music is in your basket
View basket
Loading... 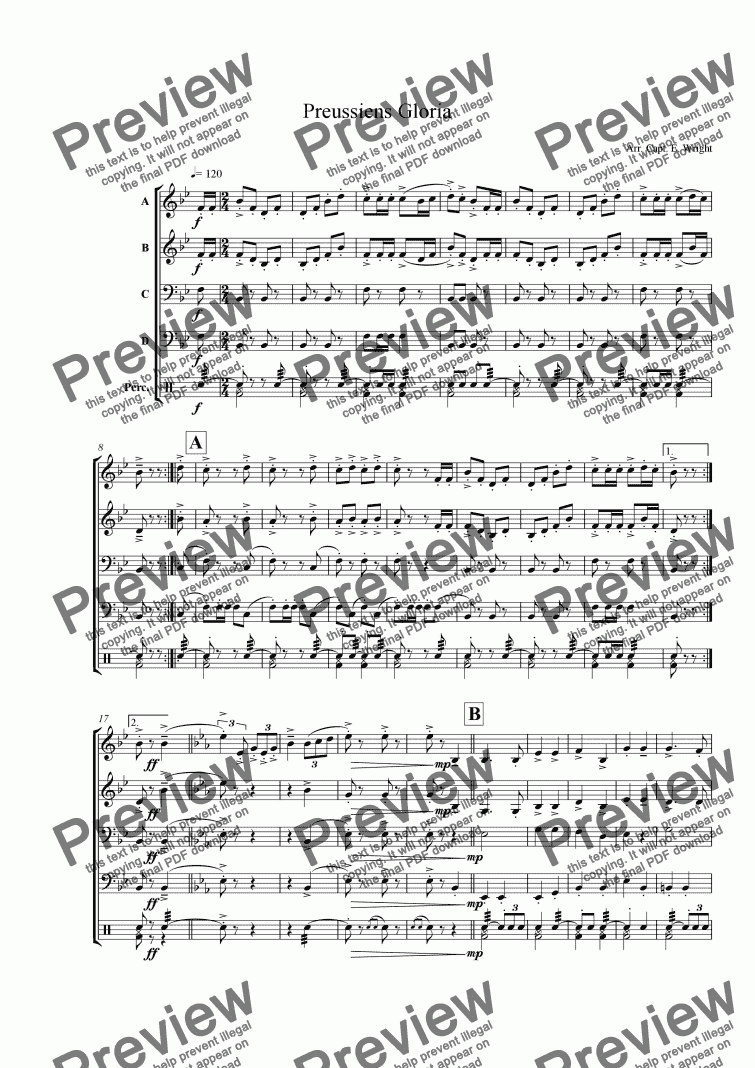 By: Gottfried Piefke
For: Military band

Composer
Gottfried Piefke
Year of composition
1870
Arranger
Elliot Wright
Year of arrangement
2012
Difficulty
Easy (Grades 1-3)
Duration
3 minutes
Genre
Other
License details
For anything not permitted by the above licence then you should contact the publisher first to obtain permission.

Instigated by Prussian Chancellor Otto von Bismark, and declared by France, the Franco-Prussian War (1870-1871) was a climax of tensions which had remained between the two countries during and after the Napoleonic Wars. Through the war with France, Prussia and the German states were able to expand their borders and gain recognition as a considerable power, securing the unification of Germany under Wilhelm I of Prussia. It marked the fall of Napoleon III, and the Second French Empire. France lost the territories of Alsace and Lorraine, setting precedents which would later aid the outbreak of the First World War.

Preussiens Gloria did not, however, become an enduring symbol of the war – it did not achieve a broad audience for several decades by virtue of the fact that it was only played on special occasions. It was re-discovered and added to the general military repertoire in 1909 by a Professor Grawert. Today, it is still played by the Bundeswehr at ceremonies and state visits, and has been adopted by international units, including Britain’s Honourable Artillery Company.

This piece should be carried primarily by the trumpets, which ideally should be issued entirely “A” and “B” parts if possible. All upper winds should also be issued parts in the same manner. All lower winds and low brass (Tenor Sax, Bari Sax, Trombone, Tuba, and Euphonium) should be given the “D” part as much as possible. The “C” part needs only a small representation in the ensemble , and should be reserved mainly for musicians who encounter difficulty playing any other part.

The DMus will notice the Clarinet “A” part is doubled up an octave in the chorale section. This may be useful to fill in the melody and gain clarity from the winds, if there are few trumpets in the ensemble. The DMus may, however, wish for the clarinets to play the lower notes though, if trumpets are plentiful or if the ensemble is indoors, to avoid the intonation problems caused by overblowing between Clarinets, Trumpets and Flutes in their upper registers.