By: Vittorio Monti (1868-1922) Arranged by Keith Terrett
For: Solo Tenor Horn + piano
This music is in your basket
View basket
Loading... 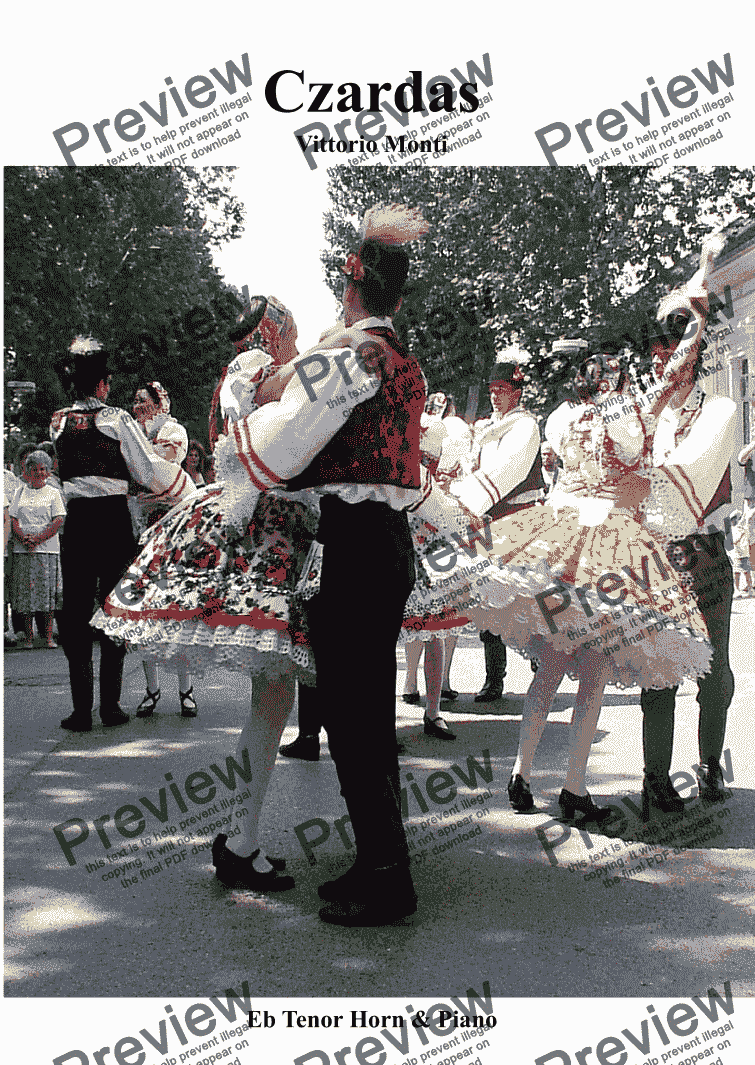 Composer
Vittorio Monti (1868-1922) Arranged by Keith Terrett
Year of composition
1904
Arranger
Keith Terrett
Year of arrangement
2007
Publisher
Music for all Occasions
Difficulty
Difficult (Grades 7+)
Duration
4 minutes
Genre
Classical music
License details
For anything not permitted by the above licence then you should contact the publisher first to obtain permission.

An arrangement of Monti’s Czardas for solo Eb Tenor Horn and Piano, with a hint of the exotic rumba!

The piece has seven different sections, each one of a different tempo and occasionally key. The first half of the piece is in D minor, then modulates to D major, back to D minor, and then finally finishes in D major. The first section is Andante Largo, followed by a large increase in speed to Allegro Vivo. This then slows down to Molto Meno. The piece then slows down more to Meno, Quasi Lento. The piece then suddenly picks up in pace and is at Allegro Vivace. It then slows down to Allegretto and finally to Molto Più Vivo. The tempo changes make the piece exciting and interesting, but even with all of these tempo changes, it is generally expected that there should be some rubato to add feeling to the piece. There are also many different dynamic changes in the piece, ranging from pianissimo to fortissimo.

In the Meno, Quasi Lento section, the violin plays stopped harmonics. This involves the violinist placing their finger down on the note and playing another note, with the finger only just touching the string 5 semitones above. This gives the effect of the violin sounding two octaves (24 semitones) higher.

The alto horn (US English; tenor horn in British English, Althorn in Germany; occasionally referred to as E♭ horn) is a brass instrument pitched in E♭. It has a predominantly conical bore (most tube extents gradually widening), and normally uses a deep, cornet-like mouthpiece.

It is most commonly used in marching bands, brass bands and similar ensembles, whereas the horn tends to take the corresponding parts in symphonic groupings and classical brass ensembles.