Escape to the Phaeacians for Concert/Wind Band

By: Composed & arranged by Keith Terrett
For: Concert band / wind band
This music is in your basket
View basket
Loading... 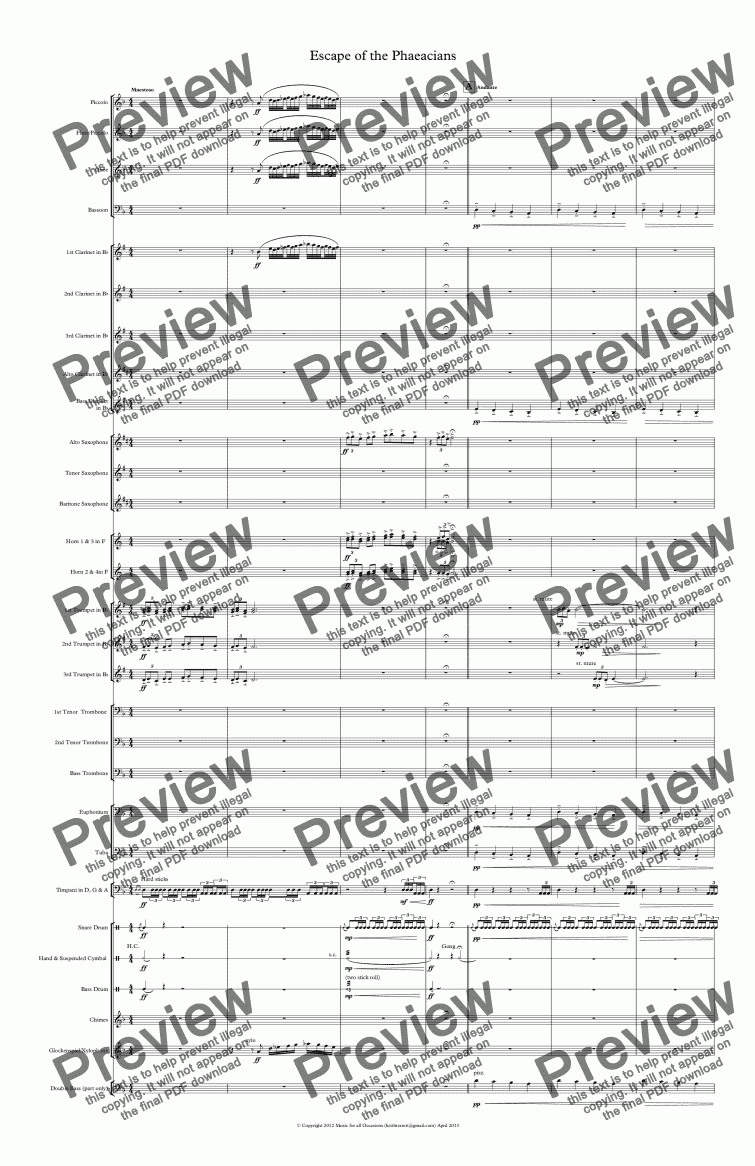 Escape to the Phaeacians for Concert/Wind Band

Composer
Composed & arranged by Keith Terrett
Publisher
Music for all Occasions
Difficulty
Moderate (Grades 4-6)
Duration
4 minutes
Genre
Modern classical music
License details
For anything not permitted by the above licence then you should contact the publisher first to obtain permission.

A new contest piece which uses the Phygian mode with shifting time signatures. Add lyrical woodwind melodies and rhythmic percussion with brass, thoughtful orchestration all combined with innovative phrasing, and you have a composition driven with colour and energy. A real winner for both judges and players alike!

I am available for your band concert/seminar, book early to avoid dissapointment:keithterrett@gmail.com

Escape to the Phaeacians is based on the following story.

Then the story of Odysseus is told. He has spent seven years in captivity on Calypso’s island, Ogygia. Calypso falls deeply in love with him but he has consistently spurned her advances. She is persuaded to release him by Odysseus’ great-grandfather, the messenger god Hermes, who has been sent by Zeus in response to Athena’s plea. Odysseus builds a raft and is given clothing, food and drink by Calypso. When Poseidon finds out that Odysseus has escaped, he wrecks the raft but, helped by a veil given by the sea nymph Ino, Odysseus swims ashore on Scherie, the island of the Phaeacians. Naked and exhausted, he hides in a pile of leaves and falls asleep. The next morning, awakened by the laughter of girls, he sees the young Nausicaa, who has gone to the seashore with her maids to wash clothes after Athena told her in a dream to do so. He appeals to her for help. She encourages him to seek the hospitality of her parents, Arete and Alcinous, or Alkinous. Odysseus is welcomed and is not at first asked for his name. He remains for several days, takes part in a pentathlon, and hears the blind singer Demodocus perform two narrative poems. The first is an otherwise obscure incident of the Trojan War, the "Quarrel of Odysseus and Achilles"; the second is the amusing tale of a love affair between two Olympian gods, Ares and Aphrodite. Finally, Odysseus asks Demodocus to return to the Trojan War theme and tell of the Trojan Horse, a stratagem in which Odysseus had played a leading role. Unable to hide his emotion as he relives this episode, Odysseus at last reveals his identity. He then begins to tell the story of his return from Troy.

Reviews of Escape to the Phaeacians for Concert/Wind Band