By: Samuel Scheidt (1587-1653) arr. Keith Terrett
For: Brass choir
This music is in your basket
View basket
Loading... 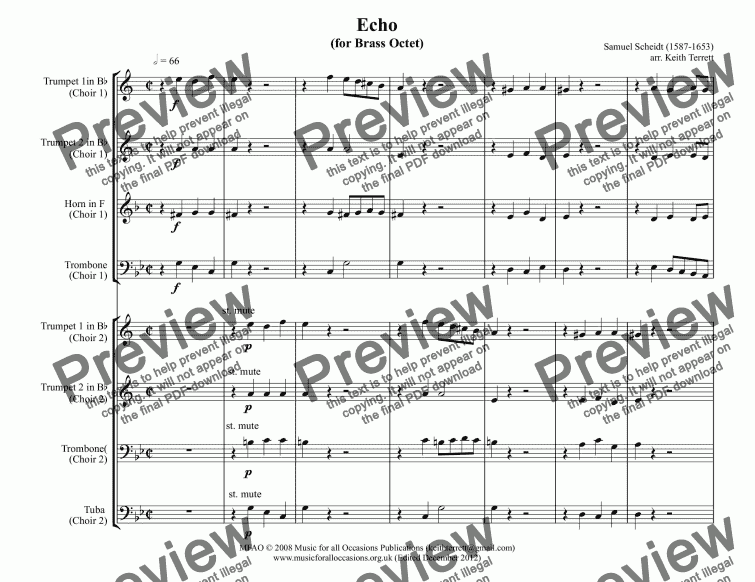 Composer
Samuel Scheidt (1587-1653) arr. Keith Terrett
Publisher
Music for all Occasions
Difficulty
Moderate (Grades 4-6)
Duration
1 minute
Genre
Classical music
License details
For anything not permitted by the above licence then you should contact the publisher first to obtain permission.

Echo transcribed for Brass Octet was composed by Samuel Scheidt (baptized 3 November 1587 - 24 March 1654) was a German composer, organist and teacher of the early Baroque era.

"Echo" for Brass Octet is scored for two choirs.

The music of Samuel Scheidt is a beautiful fit for modern instruments and Keith Terrett has done a magnificent job with this arrangement which can be performed by moderately advanced performers.

He was born in Halle, and after early studies there, he went to Amsterdam to study with Sweelinck, the distinguished Dutch composer, whose work had a clear influence on Scheidt’s style. On his return to Halle, Scheidt became court organist, and later Kapellmeister, to the Margrave of Brandenburg. Unlike many German musicians, for example Heinrich Schütz, he remained in Germany during the Thirty Years’ War, managing to survive by teaching and by taking a succession of smaller jobs until the restoration of stability allowed him to resume his post as Kapellmeister.

Scheidt was the first internationally significant German composer for the organ, and represents the flowering of the new north German style, which occurred largely as a result of the Protestant Reformation. In south Germany and some other countries of Europe, the spiritual and artistic influence of Rome remained strong, so most music continued to be derivative of Italian models. Cut off from Rome, musicians in the newly Protestant areas readily developed new stylistic ideas which were much different from the practice of their neighbours.

Scheidt’s music is in two principal categories: instrumental music, including a large amount of keyboard music, mostly for organ; and sacred vocal music, some of which is a cappella and some of which uses a basso continuo or other instrumental accompaniment. His organ music was famous at the time, though since then it has been eclipsed by the music of J.S. Bach. In his numerous chorale preludes, Scheidt often used a "patterned variation" technique, in which each phrase of the chorale uses a different rhythmic motive, and each variation (consisting of the several phrases) is more elaborate than the previous, until the climax of the composition is reached. In addition to his chorale preludes, he wrote numerous fugues, suites of dances (which were often in a cyclic form, sharing a common ground bass) and fantasias.

He also produced a large quantity of vocal music, both sacred and secular, much of which survives.

Reviews of Echo for Brass Octet