Fugue on B-a-ch- for Marimba Quintet

By: Johann Georg Albrechtsberger arr. Keith Terrett
For: Quintet of Marimbas [treble staff]
This music is in your basket
View basket
Loading... 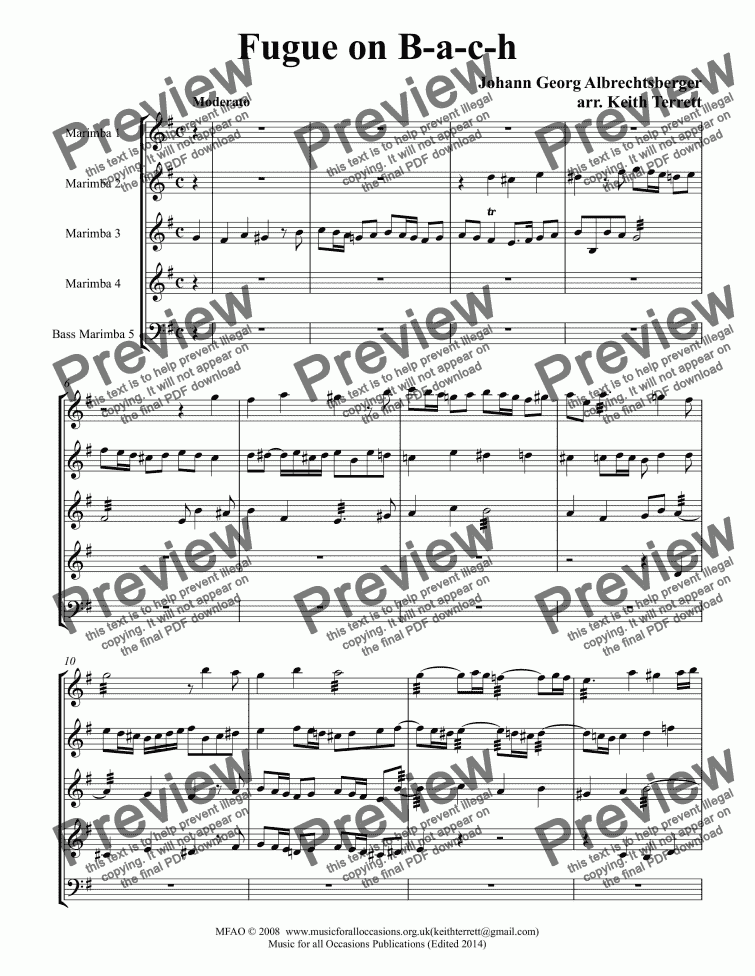 Fugue on B-a-ch- for Marimba Quintet

Composer
Johann Georg Albrechtsberger arr. Keith Terrett
Publisher
Music for all Occasions
Difficulty
Moderate (Grades 4-6)
Duration
3 minutes
Genre
Classical music
License details
For anything not permitted by the above licence then you should contact the publisher first to obtain permission.

Fugue uber B-A-C-H transcribed for 5 Marimba’s, or any other keyboard percussion of your choice.

He originally studied music at Melk Abbey and philosophy at a Benedictine seminary in Vienna and became one of the most learned and skillful contrapuntists of his age. Albrechtsberger's earliest classmates included Michael Haydn and Franz Joseph Aumann. After being employed as organist at Raab in 1755 and Maria Taferl in 1757, he was appointed Thurnermeister back at Melk Abbey. In 1772 he was appointed organist to the court of Vienna, and in 1792 Kapellmeister of St. Stephen's Cathedral.

His fame as a theorist attracted to him in the Austrian capital a large number of pupils, some of whom afterwards became eminent musicians. Among these were Johann Nepomuk Hummel, Ignaz Moscheles, Josef Weigl (1766–1846), Ludwig-Wilhelm Tepper de Ferguson (1768 – after 1824), Antonio Casimir Cartellieri, Ludwig van Beethoven, and Franz Xaver Wolfgang Mozart. Beethoven had arrived in Vienna in 1792 to study with Joseph Haydn but quickly became infuriated when his work was not being given attention or corrected. Haydn recommended his friend Albrechtsberger, with whom Beethoven then studied harmony and counterpoint. On completion of his studies, the young student noted, "Patience, diligence, persistence, and sincerity will lead to success," which reflects upon Albrechtsberger's own compositional philosophies.

Reviews of Fugue on B-a-ch- for Marimba Quintet