By: David Kimpton
For: Orchestra
This music is in your basket
View basket
Loading... 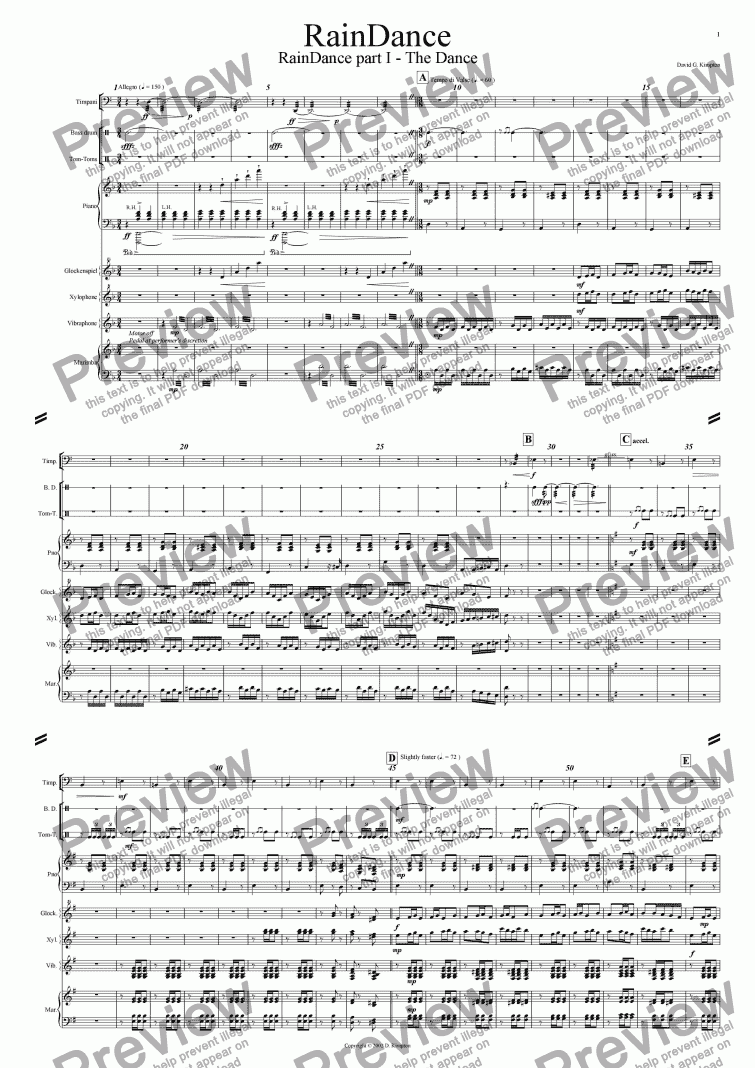 By: David Kimpton
For: Orchestra

Composer
David Kimpton
Year of composition
2002
Lyricist
none
Publisher
Kandon Studios
Difficulty
Difficult (Grades 7+)
Duration
6 minutes
Genre
Modern classical music
License details
For anything not permitted by the above licence then you should contact the publisher first to obtain permission.

Composed during 2002, RainDance was my Extension Music Major Work. The piece consists of two movements, separate, but also tied together in many ways!

RainDance Part I - The Dance This movement is for 8-Piece Percussion Ensemble. A group of people start dancing a Rain Dance to bring in the rain. After some time, a rumble of thunder is heard in the distance! Hearing this, the dancers start to dance even more energetically, getting faster and faster, the music rising in pitch, until a final massive thunderclap sends them scurrying for their homes!

The first movement combines several different elements - the instrumentation was inspired by African and Aboriginal traditional instrumentation, but has some Western influences. The piece itself is a Waltz, influenced by the classic Viennese waltzes. The form is a traditional Ternary, with an Extended Intro-A-B-A1-Coda.

RainDance part II - The Storm This movement is for the combined Percussion Ensemble and Orchestra. The dancers have run home in fright, and Nature is about to let all hell break loose. Slowly, it starts to rain, with the occasional loud thunderbolt, frightening everyone. There is a moment of calm before the weather suddenly whips up in a display of nature's fury. Nature taunts the dancers, singing a discordant version of their own dance! The storm builds up again, getting more violent by the minute. The dancers decide to try to slow its progress, and come out to try and force the storm into submission - their dance tune is screamed out, but the low growl of the wind knocks them back. Unfortunately, this conflict only makes the storm go stronger, and it grows and grows in intensity. The storm, however, has one last bang in it before it starts to die away. Nature relents to the dancers, and their dance tune is heard hauntingly on the last dying gasps of wind left in the storm…

The second movement had many influences in it. The start of the movement is strongly influenced by the music of Sculthorpe, and features lots of different techniques on all the instruments to create an eerie sound for the coming storm. The percussion instrumentation also has a variety of sources - the thunder sheet came from various readings, and the SFX Sampler was an idea from the previous year's HSC compositions. The body of the work itself is in modified Fugue form, with an initial exposition, episode, modified exposition and episode in a non-related key, a bridging passage that comes basically out of nowhere, development, the "Battle" scene, and then full-orchestra recapitulation before dying away in a coda.

Sorry, there's no reviews of this score yet. Please .
In order to submit this score to ScoreExchange.com David Kimpton has declared that they own the copyright to this work in its entirety or that they have been granted permission from the copyright holder to use their work. If you believe that this score should be not available here because it infringes your or someone elses copyright, please report this score using the copyright abuse form.