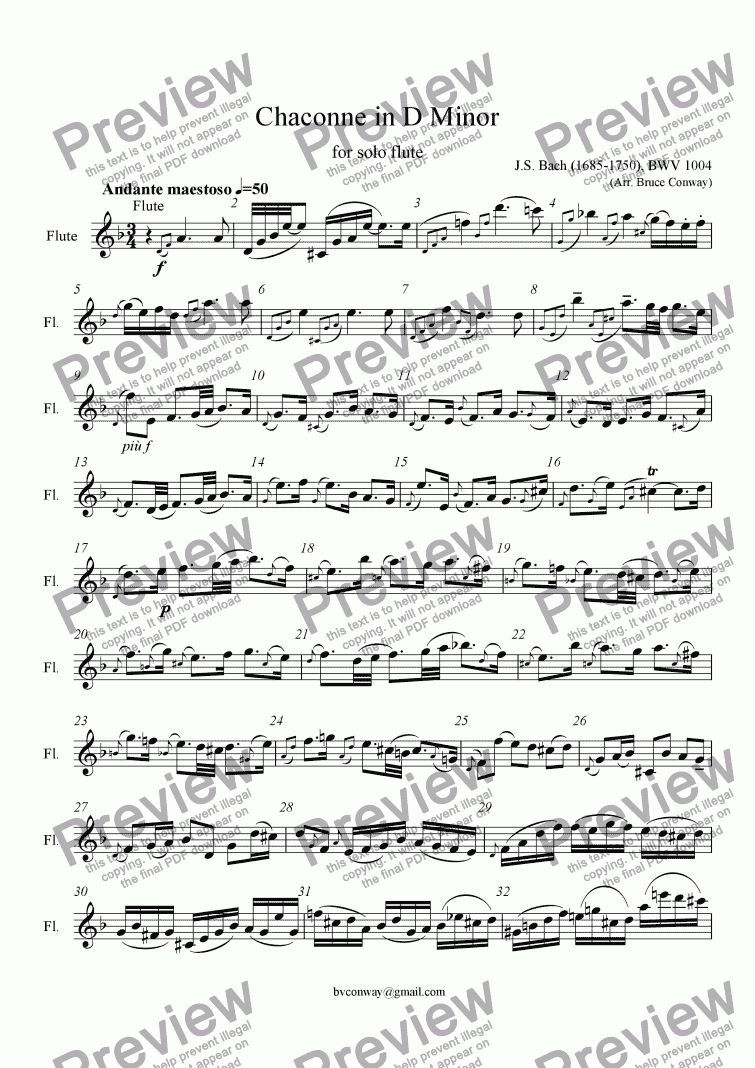 Partita for Violin No. 2 (Bach) From Wikipedia, the free encyclopedia The Partita in D minor for solo violin (BWV 1004) by Johann Sebastian Bach was written during the period 1717–1723 and one scholar, Professor Helga Thoene, suggests this partita, and especially its last movement, was a tombeau, written in memory of Bach's first wife, Maria Barbara Bach (who died in 1720), though this theory is controversial. The partita contains five movements, given in Italian as:

The ciaccona (commonly called by the French form of the word, chaconne), the concluding movement of Partita No. 2 in D minor, BWV 1004, surpasses the duration of the previous four movements combined. Along with its disproportional relationship to the rest of the suite, it merits the emphasis given it by musicians and composers alike.

The theme, presented in the first four measures in typical chaconne rhythm with a chord progression based on the repeated bass note pattern D D C♯ D B♭ G A D, begets the rest of the movement in a series of variations. The overall form is tripartite, the middle section of which is in major mode. It represents the pinnacle of the solo violin repertoire in that it covers every aspect of violin playing known during Bach's time. It is still one of the most technically and musically demanding pieces for the instrument.

Since Bach's time, several different transcriptions of the piece have been made for other instruments, particularly for the piano (by Ferruccio Busoni) and for the piano left-hand (by Brahms), as well as for the guitar, first transcribed by Argentinian guitarist and composer Antonio Sinopoli.

At least three transcriptions have been published for organ solo.

An arrangement for full orchestra (1930) was famously recorded by Leopold Stokowski.[citation needed] Recently, a bassoon transcription by Arthur Weisberg was written to highlight the capabilities of his new key systems for the bassoon.

Johannes Brahms, in a letter to Clara Schumann, said about the ciaccona: On one stave, for a small instrument, the man writes a whole world of the deepest thoughts and most powerful feelings. If I imagined that I could have created, even conceived the piece, I am quite certain that the excess of excitement and earth-shattering experience would have driven me out of my mind.

Reviews of Chaconne in D Minor for solo flute

Sorry, there's no reviews of this score yet. Please .
In order to submit this score to ScoreExchange.com Bruce Conway has declared that they own the copyright to this work in its entirety or that they have been granted permission from the copyright holder to use their work. If you believe that this score should be not available here because it infringes your or someone elses copyright, please report this score using the copyright abuse form.