a new dramatic duet for tenor and soprano

By: Music by Benjamin Sajo (2012)
For: Voice + keyboard
This music is in your basket
View basket
Loading... 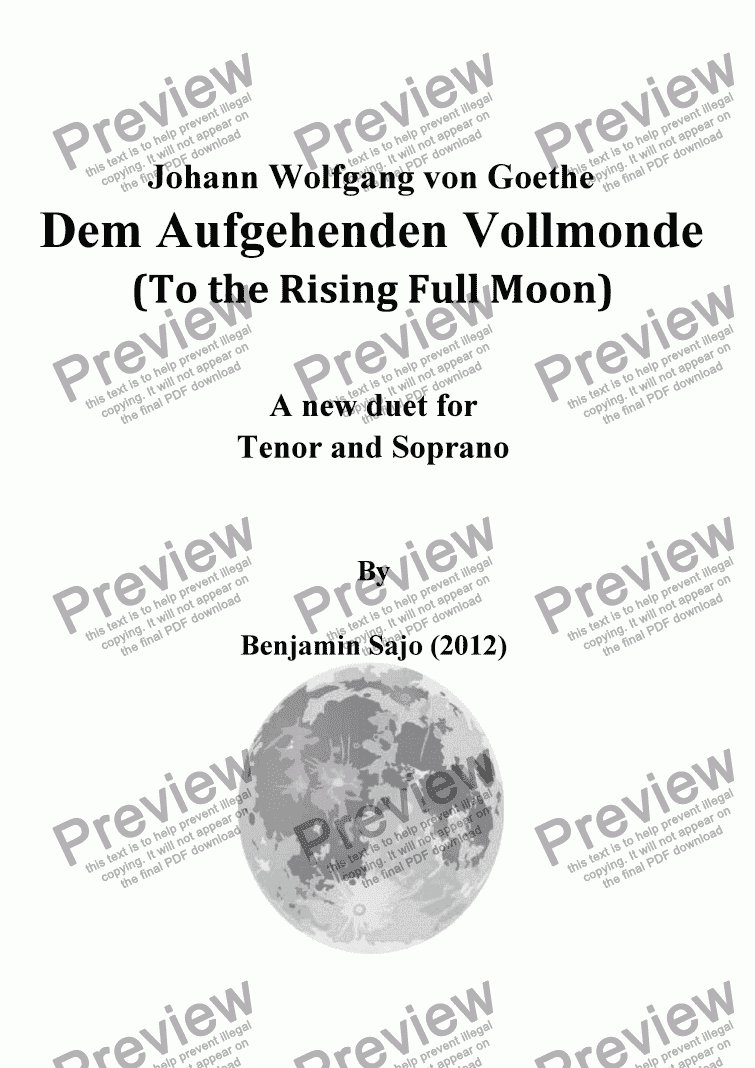 a new dramatic duet for tenor and soprano

The tenor sings Goethe’s Dem Aufgehenden Vollmonde in full. The poem summarizes the narrator regarding the rising moon breaking free from a sea of clouds, evoking for him the thoughts of distant but faithful love and kind fidelity. Written in August, this poem just as well suits a cold winter’s day, and comes from 1828—the year of Schubert’s death. It’s interesting to imagine how, to the Romantic composers, Goethe was a recent contemporary. While setting the poem, the directness and brevity of Hugo Wolf and the striking emotional shifts of Mahler inspired me musically, and I intend for the accompaniment and tenor to evoke a deeply yearning lyricism valuing the aesthetics of German lieder while maintaining my modernity.

A song in honor of the Moon goes beyond a common apostrophe, for the moon exists in all mythologies as a personified deity, or as a totem or fetish of a deity. Often, this deity is male; more often, it is female–sometimes the moon is androgynous, or shared by two binaries. The soprano line evokes the Moon through her distant voice, and, with beautiful contours, her only utterances are some of her many titles. Ironically, her line—a frank catalogue of deities associated with the Moon—contains more adventurous (though not overly flamboyant) vocal techniques. The soprano’s conceit contrasts the tenor’s Romantic and rhapsodic energies with her impersonal, gently scientific realities. The Moon, in this song setting—like the cold, mute moon of reality—only reflects the light of Humanity’s collective imagination back to us (384,400km away); it cannot light a torch of its own. But the Moon is beautiful.

Further program notes, lyrics, and performance/choreographic ideas can be found on pages 2 and 3 of the score.

Reviews of "Dem aufgehenden Vollmonde" (To the Rising Full Moon)