By: Franz X. Gruber
For: String quartet
This music is in your basket
View basket
Loading... 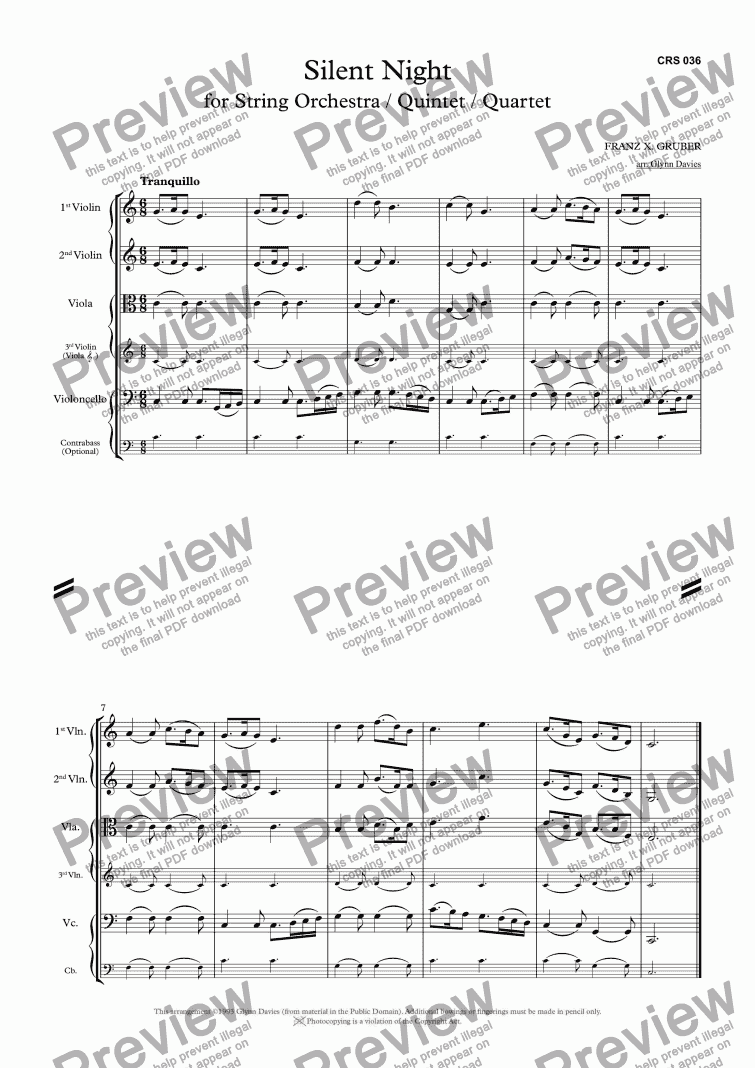 Composer
Franz X. Gruber
Year of composition
1818
Arranger
Glynn Davies
Difficulty
Easy (Grades 1-3)
Duration
1 minute
Genre
Other
License details
For anything not permitted by the above licence then you should contact the publisher first to obtain permission.

"Stille Nacht" (Silent Night) derives from the traditional German Weihnachtslied (Christmas Song). The term Weihnachtslied was generally applied to seasonal German and Austrian pastoral songs of the eighteenth century. Such songs were simple, strophic, melodically unsophisticated and for one or two voices accompanied by two violins and continuo or organ alone. Developed in rural central European churches, these songs were often performed at Midnight Mass, a Catholic ritual held very late on December 24 intended to end just after 12:00 a.m. on December 25, Christmas Day. Sometimes called Krippenlieder (crib songs), Weihnachtslieder are true representatives of a Germanic folk song tradition. By the early nineteenth century, composers and editors applied the term to almost any song with Christmas as its subject matter.

Although similar to the traditional Weihnachtslied, especially in its brevity, setting for few voices and, of course, subject matter, "Stille Nacht" is tinged with romantic sentiment and melodic sophistication. On December 24, 1818, Franz Xavier Gruber (1787-1863) composed the music at the request of Josef Mohr (1792-1848), the author of the text. At the time, Mohr was assistant priest at St. Nicholas' church in Oberndorf (near Salzburg), where Gruber was Kantor and organist. The song was first performed that night at Midnight Mass with a guitar accompaniment because the organ was not working. In 1825, an organ builder visited Oberndorf and took the song with him to the Tyrol. From there, the song made its way to the Leipzig trade fair of 1831 and was printed in 1838, slightly altered from the original. As its fame spread it came to be regarded as a Tyrolean folk song.

In 6/8 time, the song draws on Italian pastoral music with upward leaps of a third (at "Round yon virgin," "Holy infant," "Sleep in heavenly" and the penultimate "peace"). Austrian folk tradition is apparent in the repetition of melodic and rhythmic fragments and simple harmonic implications. The most obvious aspect drawn from art-song practice is an overall melodic motion that produces a "planar" effect, rising in stages to a climax then falling swiftly to the tonic pitch at the end. Mohr's text is peppered with Romantic-era imagery, including the baby's curly hair (in the original German text), shepherds and the quiet, peaceful night.

This arrangement comes with a Beginners' third violin part, and an optional bass part for use with string orchestra.