Sign in / Register
HomeInstrumentationsOrchestraSymphony #2 Mvt. II "In the Cathedral"

Symphony #2 Mvt. II "In the Cathedral"

"In the Cathedral" (Bowings Included)

By: Paul John Stanbery 2011
For: Orchestra
This music is in your basket
View basket
Loading... 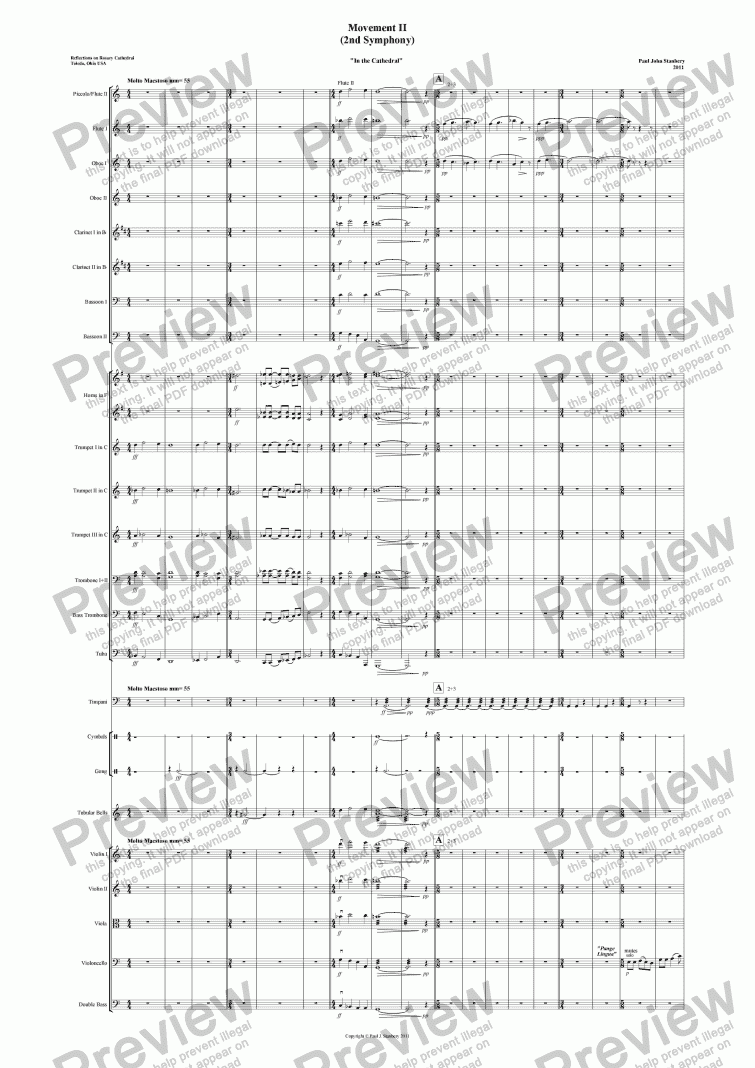 Symphony #2 Mvt. II "In the Cathedral"

"In the Cathedral" (Bowings Included)

By: Paul John Stanbery 2011
For: Orchestra

Composer
Paul John Stanbery 2011
Year of composition
2011
Publisher
Paul Stanbery
Difficulty
Difficult (Grades 7+)
Duration
6 minutes
Genre
Classical music
License details
For anything not permitted by the above licence then you should contact the publisher first to obtain permission.

Movement II “In The Cathedral” is a visit to the church the composer knew as a child, growing up in Toledo, Ohio. Rosary Cathedral is the seat of the Catholic Diocese of Toledo, and it was dedicated in 1925. It is the largest example of Spanish Plateresque architecture in the world. Frescoes of the saints and heaven fill the magnificent ceiling, culminating in the heavenly vision, with the Blessed Virgin dead center. The cathedral is also the home of one of the finest examples of E. M. Skinner’s organ genius, and the instrument is listed in the National Registry of Historic Instruments. The opening bars are given to a solemn series of chords in the brass, heavy and majestic. The listener imagines the sensation of trying to pull open the large heavy doors, and is then ushered inside. Upon entering the darkened space, one’s eyes are drawn to the ceiling where scenes from the lives of the saints and scripture are painted. The slight dissonances of the flute and oboe take our eyes upward, with an occasional “squint” (dissonance) to try and see what is there. This motive returns several times as we move more deeply within, with ever growing intensity. A pizzicato pattern throughout can be thought of as the tentative footsteps of the visitor, sometimes hesitant, sometimes pausing and waiting, hence the treatment in 5/8 time. As we move down the long aisle, we hear several chant themes: “Pange lingua, gloriosi”; “Gloria Patri et Filio”; Jesu Dulcis Memoria”, all commonly heard during various feasts of the year. Then, in some distant rehearsal room, we hear the choir intoning “Sancta Maria, Mater Dei”, from the Ave Maria by Vittoria. As we move further into the great space, as in all such churches, there are kneeling penitents (usually older ladies in veils) praying the rosary. As they do so, allowing the beads to “sizzle” against the pew in front of them. This is depicted in the tremolo sounds of the viola and cello sections. As the visitor moves down the aisle, the light from the ceiling intensifies and climaxes under that heavenly vision with the same “Sancta Maria” quotation heard earlier, but this time for full orchestra (imitating the great Skinner organ sound). There is a slight extension here before a grand pause. An “Idee Fixe” is heard, which appears in different form within the four movements of the symphony. We revisit “Gloria Patri” once again, slowly, and the work ushers us out with the solo flute over strings playing “Deo Gratias”, commonly heard at the conclusion of worship. With a final “Amen” and chime we conclude our visit.

Reviews of Symphony #2 Mvt. II "In the Cathedral"

Sorry, there's no reviews of this score yet. Please .
In order to submit this score to ScoreExchange.com Paul Stanbery has declared that they own the copyright to this work in its entirety or that they have been granted permission from the copyright holder to use their work. If you believe that this score should be not available here because it infringes your or someone elses copyright, please report this score using the copyright abuse form.