By: J.S. Bach arranged by Keith Terrett
For: Solo Soprano Saxophone + piano
This music is in your basket
View basket
Loading... 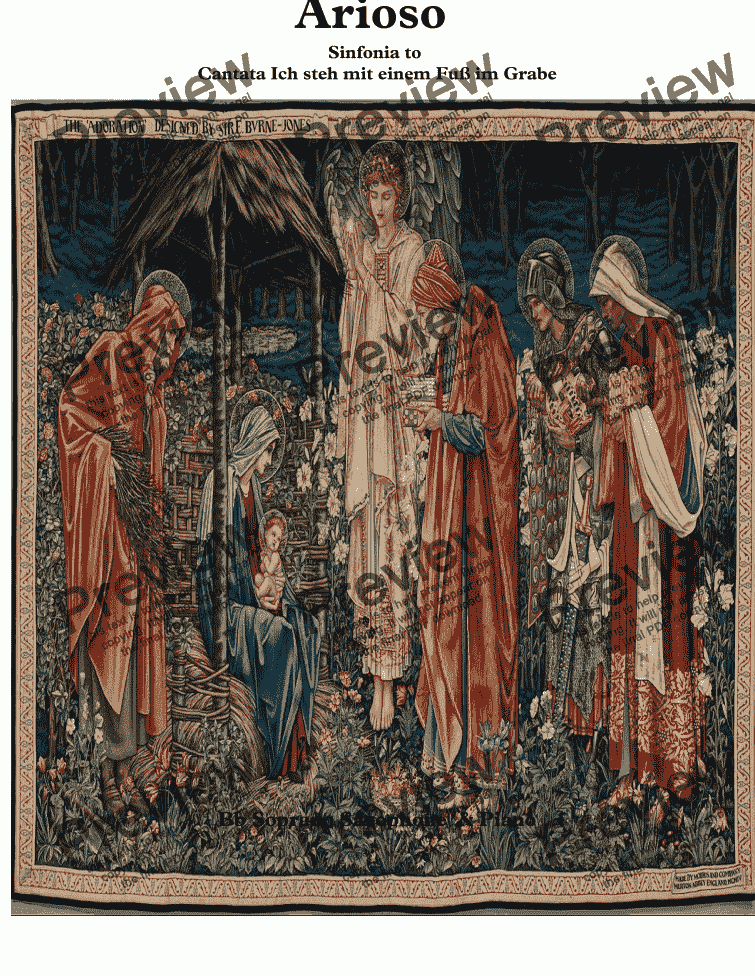 Composer
J.S. Bach arranged by Keith Terrett
Year of composition
1729
Publisher
Music for all Occasions
Difficulty
Moderate (Grades 4-6)
Duration
2 minutes
Genre
Classical music
License details
For anything not permitted by the above licence then you should contact the publisher first to obtain permission.

Ich steh mit einem Fuß im Grabe (I am standing with one foot in the grave), BWV 156, is a church cantata by Johann Sebastian Bach. He composed it in Leipzig for the third Sunday after Epiphany and first performed it on 23 January 1729. The cantata is well known for its opening sinfonia for orchestra and oboe solo.

BWV 156 was Bach's fourth and last cantata for the Third Sunday after Epiphany. The prescribed readings for the Sunday were taken from the Epistle to the Romans, rules for life (Romans 12:17–21), and from the Gospel of Matthew, the healing of a leper (Matthew 8:1–13). The librettist was Picander. He incorporated two chorale tunes: "Machs mit mir, Gott, nach deiner Güt" by Johann Hermann Schein (1628) and "Herr, wie du willt, so schicks mit mir" by Kaspar Bienemann (1582).

The sinfonia was likely derived from an earlier oboe concerto and was later adapted as part of Bach's Harpsichord Concerto in F minor.[1] The term arioso, which in Italian literally means ‛airy’, designates a style of solo opera singing between recitative and aria. Arguably the famous arioso ever composed, today’s piece serves as the opening sinfonia of cantata BWV 156 by Johann Sebastian Bach.

The opening sinfonia is scored for oboe, strings, and continuo. It is in F major and common time.[1] Compared to the later version for harpsichord, the melody is straightforward and unembellished, and is harmonically conceived to prepare the second movement.

The second movement is a combined tenor aria and soprano chorale with obbligato strings. Unusually, it begins with a syncopated continuo line under unison strings. The movement also features sequences and harmonic contrasts.

Both bass recitatives are secco and in minor mode. The first, the third movement of the cantata, is characterized by a disjunct melodic line and a concluding arioso line. The second, the fifth movement, is comparatively "lighter in mood and spirit".[4] It anticipates the melody of the final chorale setting.

The alto aria is accompanied by oboe and violin in parallel thirds and sixths. The movement includes several instances of word painting. Formally, the movement is an altered da capo aria. It has a "generally sunny affect … only momentarily disturbed by more charged harmonies".

The final movement is a four-part setting of the chorale in C major. The phrase lengths are varied to provide a "hint of timelessness".

The term arioso, which in Italian literally means ‛airy’, designates a style of solo opera singing between recitative and aria. Arguably the famous arioso ever composed, today’s piece serves as the opening sinfonia of cantata BWV 156 by Johann Sebastian Bach.