Down To The River To Pray (choir SATB + violin + piano)

for choir, violin and keyboard

By: anonymous
For: Choir + keyboard
This music is in your basket
View basket
Loading... 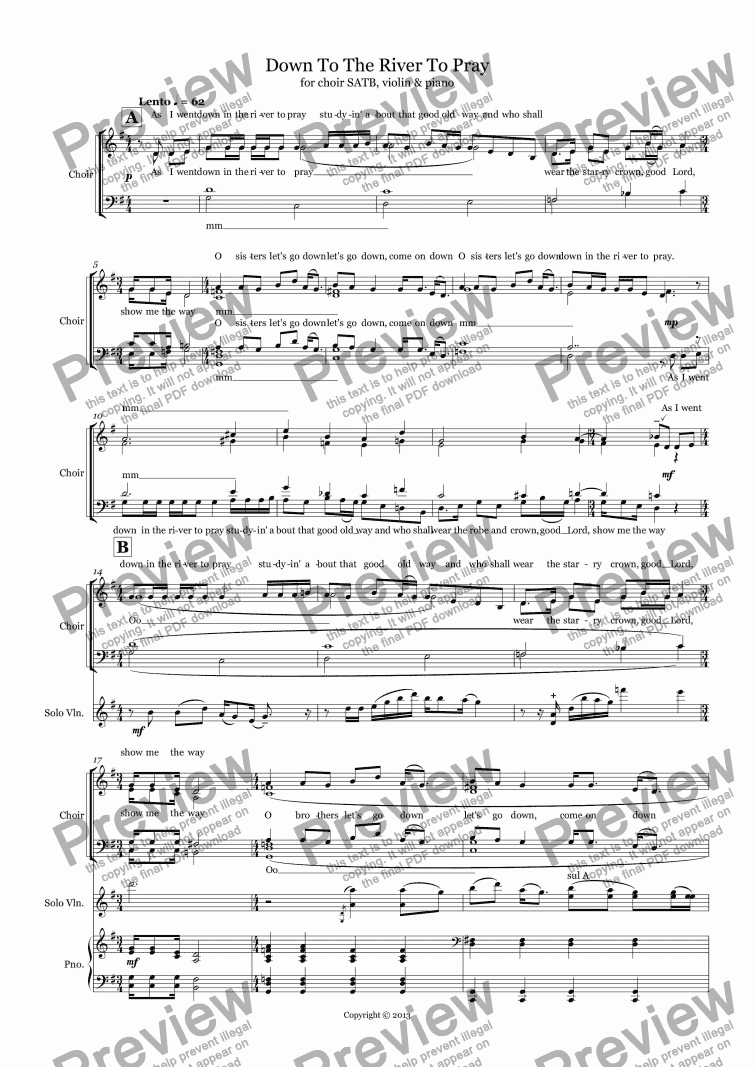 Down To The River To Pray (choir SATB + violin + piano)

for choir, violin and keyboard

By: anonymous
For: Choir + keyboard

The traditional Appalachian song “Down in the River to Pray” is well-known, especially since Alison Krauss and the movie “O Brother, Where Art Thou?”(released in 2000) popularized it. Yet, its composer remains a mystery, at least in some measure. Research indicates the song was written by slaves in the 19th Century who worked in the fields. Other people believe it was perhaps a derivative of a native American tribal song that was adapted with Christian lyrics. It was reportedly published in Southern Harmony, a 19th Century hymnal, prior to many African-American spiritual songs being gathered and published during the Civil War and the post-Civil War Reconstruction period. And, what if someone told you it was written by George H. Allan in Nashville, Tennessee during slavery in the South, and was published in a slave songbook in 1867? Its appearance in “Slave Songs of the United States” in 1867, with words uniquely colloquial to black slave spiritual songs of that period, seems to point us in that direction to this song’s genealogy. The song had a different name, too, than the one by which we commonly know it today.

The song as originally composed was known as “The Good Old Way”, and is attributed to a G.H. (George H.) Allan in the contents section of the slave song book of 1867. The song may also be known as “Come, Let Us All Go Down”, but has also been known as “Down to the River to Pray”, and alternately as “Down in the River to Pray”. However, as originally constructed by Mr. Allan (or perhaps some other contemporary, most likely a slave), the song entreats worshippers to go to a valley, not a river…

What valley? If George Allan was a slave, or at least was a song collector in Nashville, one would suspect the valley is somewhere in Tennessee –lotsa valleys are there. As shown in the songbook, “The Good Old Way” was # 104, and was among a collection of spirituals in Part III of that book, in which the songs’ origins are the inland slave states of Tennessee, Arkansas, and the Mississippi River. So, perhaps slaves from Arkansas or the Mississippi Valley could have been the original composers, instead. There’s lots more that’s intriguing about this song, and many questions linger. For those who changed the word ‘valley’ to ‘river’, what was significant about going to a river? And, for those who wanna go into the river to pray (and not just to the river), is that an implied message about baptism? Whatever the message, the composer was thinking of family, as mothers, fathers, sisters, and brothers are addressed; I can imagine a slave family clinging to one another in this song’s embrace. And, we’re all sinners, the song’s conclusion reminds us. Isn’t it interesting that a song from some slaves still resonates in our culture 150 years later?

Silang Mabele [South-African folksong] (choir SATB), Down To The River To Pray (choir SATB + string orchestra + violin) and Will the Circle Be Unbroken? (choir SATB)