Piece for Orchestra - A minor

By: Ben Wright
For: Orchestra
This music is in your basket
View basket
Loading... 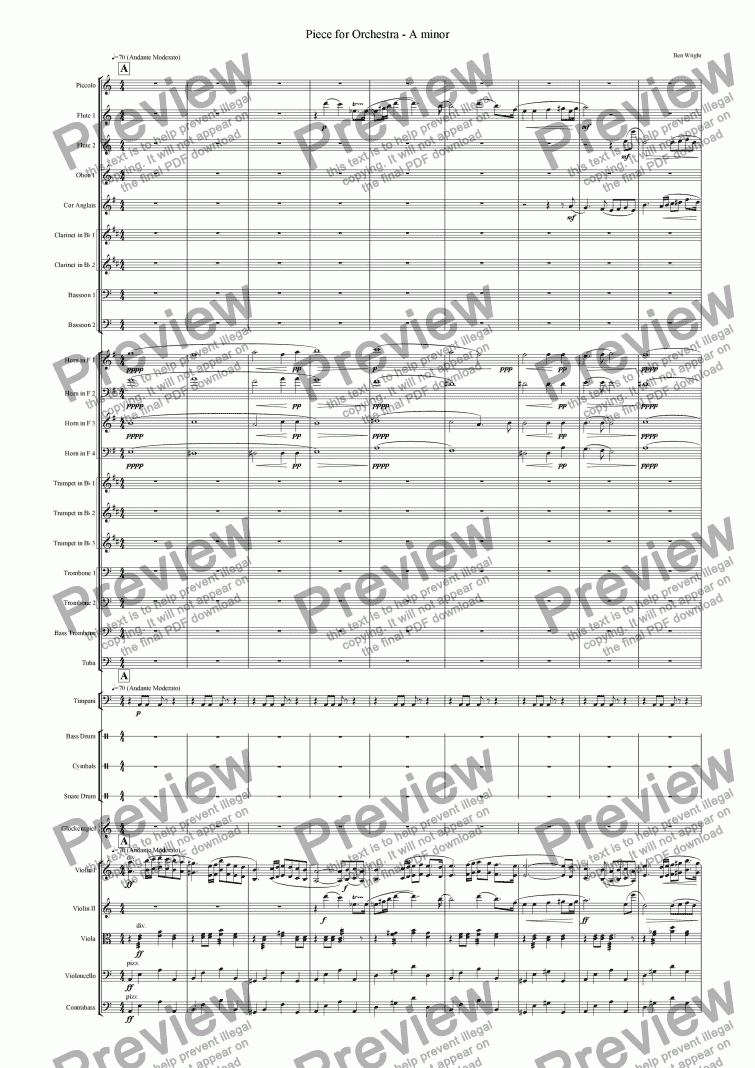 Piece for Orchestra - A minor

By: Ben Wright
For: Orchestra

Composer
Ben Wright
Year of composition
2013
Difficulty
Difficult (Grades 7+)
Duration
12 minutes
Genre
Classical music
License details
For anything not permitted by the above licence then you should contact the publisher first to obtain permission.

This is a piece for full orchestra, conforming roughly perhaps to sonata form. The main elements are:

The Exposition - the setting out of the musical ideas - consists of a 1st subject, with two themes, both in A minor. The first is laid out immediately, and the second at bar 17 (rehearsal mark B). The 1st subject is repeated.

Another bridge section follows (bars 56 to 60), which moves the piece into E minor, the dominant key of the tonic, A minor, and the end of the exposition.

At bar 132 (rehearsal mark K) the recapitulation begins, with the three themes released from the constraints of the Exposition section. The 1st and 2nd subject are repeated in full again (at bars 132 and 148 respectively), although with different orchestration and not quite identical themes. Much of the tempo increase from the development section is retained. These changes mean that the recapitulation is a quite different beast to the exposition.

The bridge section between the 1st and 2nd subjects from the exposition is dispensed with (largely because there is no need to change key for the recapitulation of the 2nd subject). On the other hand, the 2nd subject in the recapitulation (bar 166, rehearsal mark N), doesn't stay in A minor for long as it moves quickly through a number of key changes before returning home for the final climax of the piece (and a tierce de Picardie final chord).

An earlier version of the piece (from well over a decade ago!) treated what is now the 2nd subject as simply part of the move to the climax of the first section. The development section also featured much more complete versions of the themes from what is now the 1st subject, with much more importance placed on the second of these. There followed a seemingly endless string of new ideas, followed (eventually) by a near straight repeat of the exposition. I hope that this new version focuses a bit more on developing the themes from the exposition, as well as providing a

One interesting anecdote - the brusque brass chord in bar 40 arose largely by accident. Although there had been a brass element to the chord in the earlier version, the process of migrating the midi version from an old Cubase package to Sibelius messed up all the dynamics. The trumpets played much louder than originally envisaged, but i liked the effect and so kept it in. Perhaps a new composing technique to keep in mind!

Reviews of Piece for Orchestra - A minor

Sorry, there's no reviews of this score yet. Please .
In order to submit this score to ScoreExchange.com Ben Wright has declared that they own the copyright to this work in its entirety or that they have been granted permission from the copyright holder to use their work. If you believe that this score should be not available here because it infringes your or someone elses copyright, please report this score using the copyright abuse form.