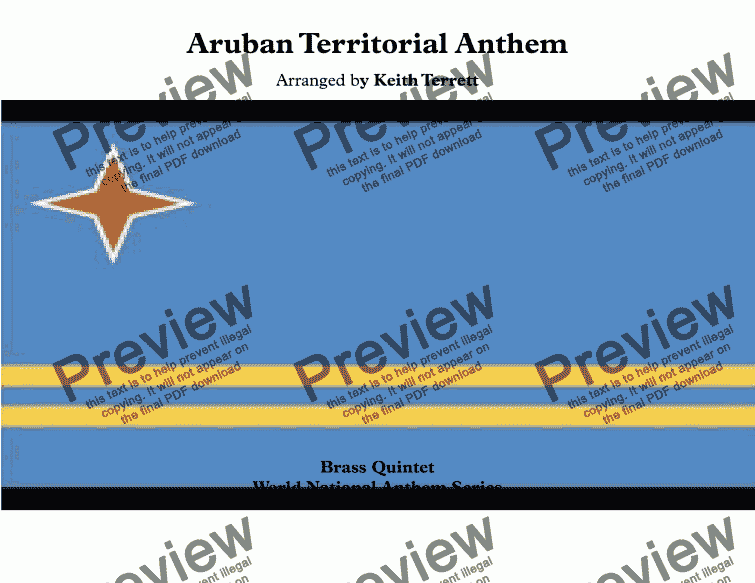 An arrangement for Brass Quintet of the National Anthem of Aruba.

Aruba Dushi Tera (Aruba Dear Country) is the national anthem of Aruba. It is a waltz written by Juan Chabaya Lampe and composed by Rufo Wever. It was accepted as the anthem on March 18, 1976. It is written in Papiamento.

The official national anthem of this Dutch colony is that of the Netherlands; its national song, a waltz, has been adopted by the local government for use as a territorial anthem.

Aruba (pron.: /əˈruːbə/ ə-ROO-bə, Dutch pronunciation: [aˈruba]) is a 33-kilometer-long (20 mi) island of the Lesser Antilles in the southern Caribbean Sea, located 27 km (17 mi) north of the coast of Venezuela. Together with Bonaire and Curaçao, it forms a group referred to as the ABC islands of the Leeward Antilles, the southern island chain of the Lesser Antilles. Collectively, Aruba and the other Dutch islands in the Antilles are commonly referred to as the Netherlands Antilles or the Dutch Antilles.

Furthermore, Aruba is one of the four constituent countries that form the Kingdom of the Netherlands, along with the Netherlands, Curaçao and Sint Maarten. The citizens of these countries all share a single nationality: Dutch. Aruba has no administrative subdivisions, but, for census purposes, is divided into eight regions. Its capital is Oranjestad.

Unlike much of the Caribbean region, Aruba has a dry climate and an arid, cactus-strewn landscape. This climate has helped tourism as visitors to the island can reliably expect warm, sunny weather. It has a land area of 179 square kilometres (69.1 sq mi) and is densely populated, with a total of 101,484 inhabitants at the 2010 Census. It lies outside the hurricane belt.

On 18th March 1948, during a Netherlands-Surinam-Curaçao conference in the Hague, the seeds of independence and a National Day for Aruba were sown by then Aruban leader Shon A. Eman who presented a petition signed by more than 2000 Arubans in favor of independence.

Almost thirty years later during a parliamentary session on 16th March 1976, it was agreed that March 18th would be Aruba’s National Day - the day to celebrate Aruba’s national anthem and flag and this was celebrated for the first time in 1976.

Exactly 10 years later, in 1986, also on this important date, Aruba celebrated the achievement by Betico Croes of a dream that had been three generations in the making - Status Aparte - an autonomous status within the kingdom of the Netherlands. On this date in 1996, a monument was inaugurated in remembrance of the 2,147 people who, back in 1947 and 1948 had signed a petition in favor of Status Aparte. 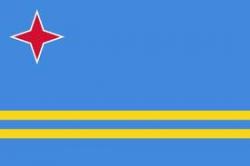