By: Composed by Ludvig Von Beethoven arranged by Keith Terrett
For: Brass quintet
This music is in your basket
View basket
Loading... 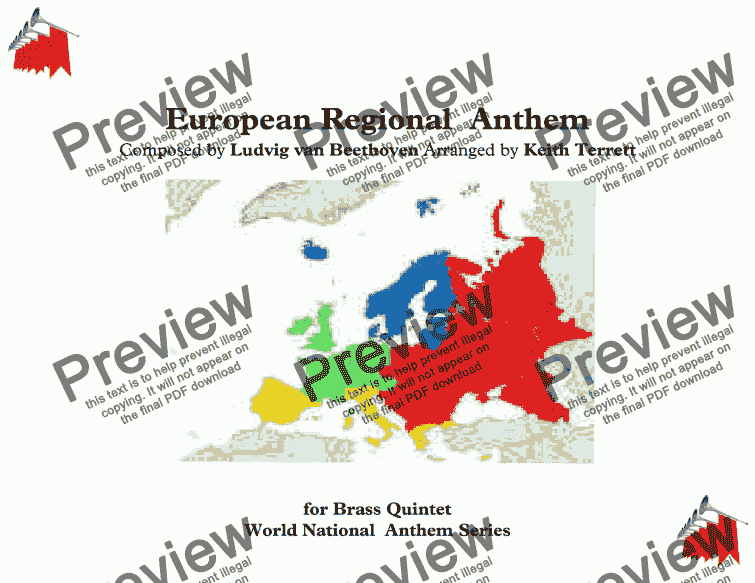 By: Composed by Ludvig Von Beethoven arranged by Keith Terrett
For: Brass quintet

Composer
Composed by Ludvig Von Beethoven arranged by Keith Terrett
Publisher
Music for all Occasions
Difficulty
Easy (Grades 1-3)
Duration
1 minute
Genre
Classical music
License details
For anything not permitted by the above licence then you should contact the publisher first to obtain permission.

An arrangement for Brass Quintet of the European regional Anthem.

Ode to Joy" (German original title: "Ode an die Freude") is the anthem of the European Union and the Council of Europe; both of which refer to it as the European Anthem due to the Council’s intention that, as a modern composition with a mythological flair, it does represent Europe as a whole, rather than any organisation. It is based on the final movement of Beethoven’s 9th Symphony composed in 1823, and is played on official occasions by both organisations.

In 1971 the Parliamentary Assembly of the Council of Europe decided to propose adopting the prelude to the Ode To Joy from Beethoven’s 9th Symphony as the European anthem, taking up a suggestion made by Count Richard Nikolaus von Coudenhove-Kalergi in 1955. Beethoven was generally seen as the natural choice for a European anthem. The Committee of Ministers of the Council of Europe officially announced the European Anthem on 19 January 1972 at Strasbourg: the prelude to "The Ode to Joy", 4th movement of Ludwig van Beethoven’s 9th symphony. In 1974 the same piece of music was adopted as the National Anthem of Rhodesia.

Conductor Herbert von Karajan was asked to write three instrumental arrangements – for solo piano, for wind instruments and for symphony orchestra and he conducted the performance used to make the official recording. He wrote his decisions on the score, notably those concerning the tempo. Karajan decided on minim (half note) = 80 whereas Beethoven had written crotchet (quarter note) = 120.

The anthem was launched via a major information campaign on Europe Day in 1972. In 1985, it was adopted by EU heads of State and government as the official anthem of the then European Community – since 1993 the European Union. It is not intended to replace the national anthems of the Member States but rather to celebrate the values they all share and their unity in diversity. It expresses the ideals of a united Europe: freedom, peace, and solidarity.

Ode to Joy is the anthem of the Council of Europe and the European Union, promoted as a symbol for the whole of Europe as are the other European symbols. It is used on occasions such as Europe Day and formal events such as the signing of treaties. The European Parliament seeks to make greater use of the music, then-Parliament President Hans-Gert Pöttering stated he was moved when the anthem was played for him on his visit to Israel and ought to be used in Europe more often.

In 2008 it was used by Kosovo as its national anthem until it adopted its own, and it was played at its declaration of independence, as a nod to the EU’s role in its independence from Serbia.

At the 2007 signing ceremony for the Treaty of Lisbon, the plenipotentiaries of the European Union’s twenty-seven Member States stood in attendance while the Ode to Joy was played and a choir of 26 Portuguese children sang the original German lyrics.

In 1992 the anthem was used by CIS national football team at the 1992 UEFA European Football Championship.

On 4 October 2010 the anthem was used when a European team beat a team representing the United States of America to win the Ryder Cup golf tournament. The European Ryder Cup captain Colin Montgomerie decided to break with tradition and play the European anthem by itself instead of the individual anthems from participating European nations.