By: James Pierpont
For: String quartet
This music is in your basket
View basket
Loading... 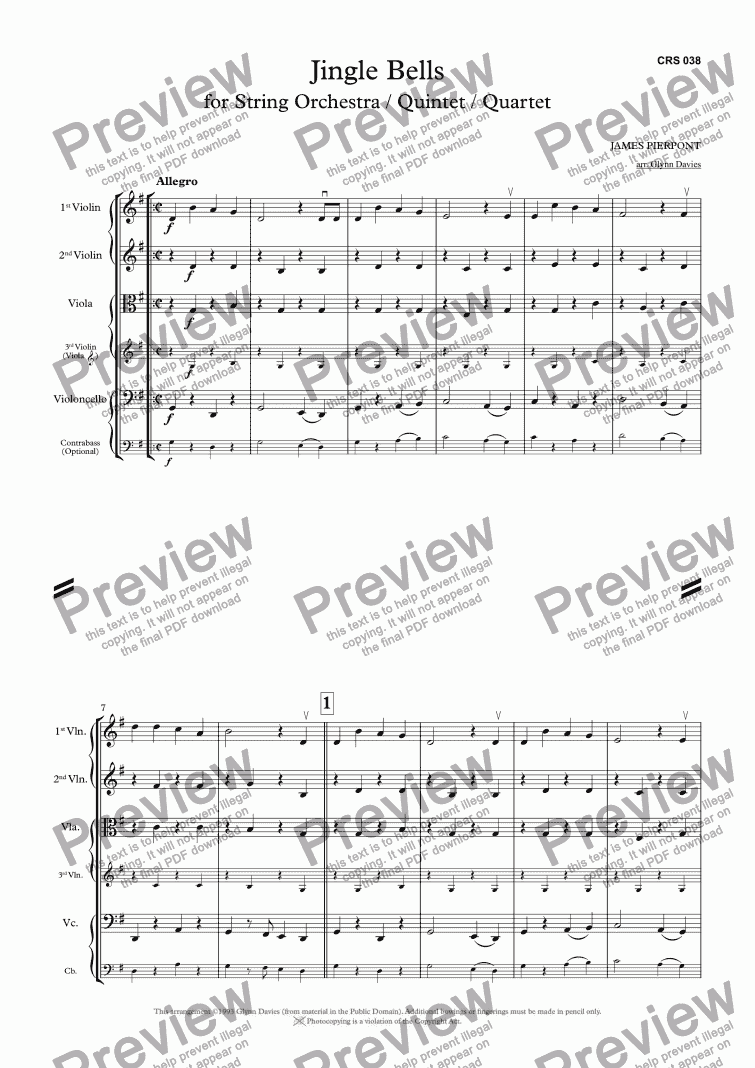 By: James Pierpont
For: String quartet

Composer
James Pierpont
Year of composition
1850
Arranger
Glynn Davies
Difficulty
Moderate (Grades 4-6)
Duration
1 minute
Genre
Classical music
License details
For anything not permitted by the above licence then you should contact the publisher first to obtain permission.

Jingle Bells was written between 1850 and 1857 by James Pierpont, the son of Unitarian minister and abolitionist John Pierpont. The most reliable account of the composition of Jingle Bells places its creation in the town of Medford, MA, where during the wintertime there were sleigh races through the center of town, originating at the Medford House; as the sleighs passed along their route, townspeople braved the cold and cheered on the drivers, sometimes singing carols and other songs.

Pierpont had just returned from California, having failed to strike it rich during the gold rush of 1949. Witnessing the sleigh rides and singing, Pierpont was allegedly inspired to write the song; he accomplished this at the home of Mrs. Otis Waterman, a Medford lady who had the only piano in town. After Pierpont was finished playing the tune that was in his head, Mrs. Waterman commented "Oh! That's a very merry little jingle." This statement further inspired the words to Jingle Bells, which is said to have become popular among Medford natives shortly afterward, and even sung along the race course there in the early 1850s.

The song did not appear in print until the Oliver Ditson Company of Boston published it under the title of The One-Horse Open Sleigh in 1857. The second edition of the song, re-titled Jingle Bells, really took off and became a huge bestseller. The terms of Pierpont's contract with Ditson did not allow him to earn very much in residuals, although he and his family retained the copyright on the tune past 1900. By the time Jingle Bells was first issued as a song, James Pierpont had settled in Savannah, GA, and was working as an organist in his elder brother's Unitarian church. Sunny Savannah seems an unlikely clime for the composition of a sleighing song, but nonetheless the city has become engaged with Medford in a battle for credit as the true home of Jingle Bells that has continued for decades. Pierpont's immediate family ultimately became so pro-Southern that they have helped lead the charge to place the composition of Jingle Bells in Savannah.

The melody of the chorus as we know it today is not the same as that published by Ditson in 1857, and so far no scholar has convincingly uncovered information about how, when, and why the tune was so radically altered in the vernacular. One account states that the simplified version of Jingle Bells was contrived by Chinese Christian missionaries around 1900, and that this is the source of the song as popularly sung today. But digests of popular songs dating from the 1880s already demonstrate the trend towards a simpler chorus for Jingle Bells. Nonetheless, the verse, with its sense of growing expectation and excitement, remains exactly as James Pierpont composed it, and forms a testimony to his skill as a writer of popular songs.

This arrangement comes with an additional third violin part, and an optional bass part for use with string orchestra.