By: Roy Williamson Arranged by Keith Terrett
For: Brass quintet
This music is in your basket
View basket
Loading... 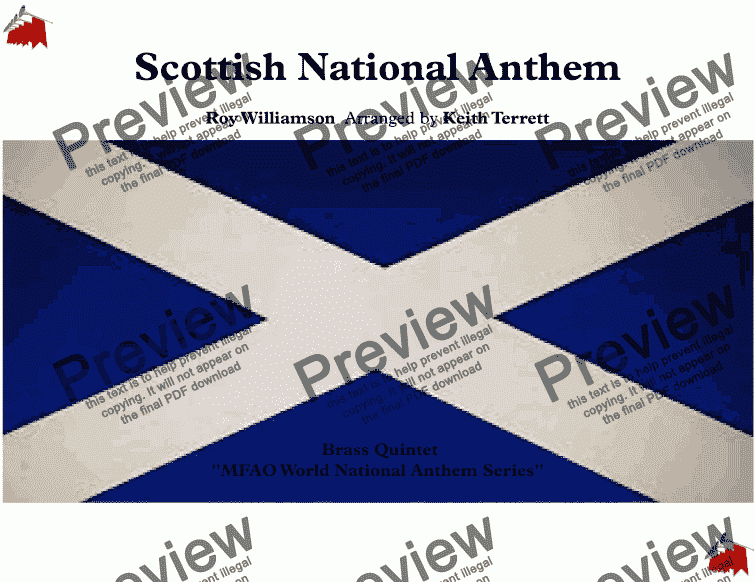 By: Roy Williamson Arranged by Keith Terrett
For: Brass quintet

Composer
Roy Williamson Arranged by Keith Terrett
Arranger
Keith Terrett
Publisher
Music for all Occasions
Difficulty
Easy (Grades 1-3)
Duration
1 minute
Genre
Classical music
License details
For anything not permitted by the above licence then you should contact the publisher first to obtain permission.

The unofficial national anthem of Scotland arranged for Brass Quintet.

There is no official national anthem of Scotland. However, a number of songs are used as unofficial Scottish anthems, most notably "Flower of Scotland" and "Scots Wha Hae". "God Save the Queen" is the national anthem for the United Kingdom as a whole and is used in Scotland in that context.

For most international sporting events Scotland uses "Flower of Scotland" as its national anthem. These events include matches of the Scottish national football team and the Scottish rugby union team. The song was also used as the victory anthem of Scotland at the Commonwealth Games in 2010, replacing Scotland the Brave.

In June 2006 the Royal Scottish National Orchestra conducted an online opinion poll on their website, asking visitors to choose a favourite to be Scotland’s national anthem. With over 10,000 votes cast, "Flower of Scotland" came first with 41% of the votes, followed by "Scotland the Brave" with 29%.

Other songs which have been suggested include Robert Burns’ "Auld Lang Syne", and Hamish Henderson’s "Freedom Come-All-Ye". Both of these songs, from the 18th and 20th centuries respectively, are written in Lowland Scots. Another suggestion is The Thistle o’ Scotland published in 1902. It was originally composed in Scottish Gaelic but translated into Lowland Scots.