By: trad.
For: String quartet
This music is in your basket
View basket
Loading... 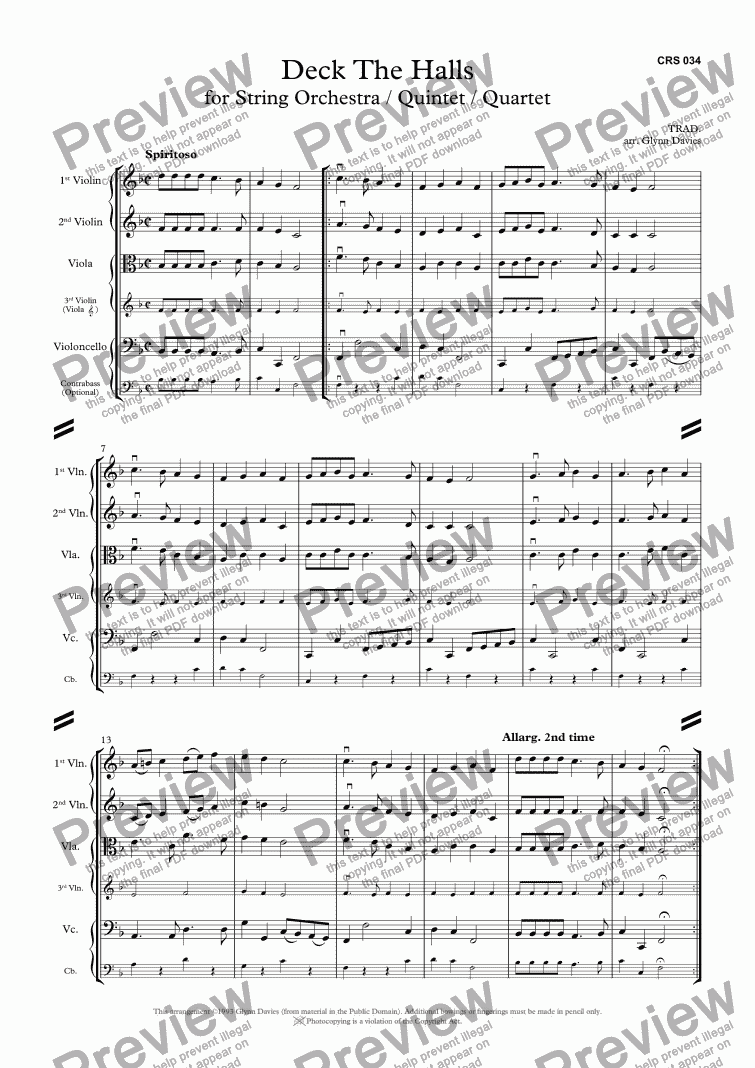 By: trad.
For: String quartet

Composer
trad.
Year of composition
1784
Arranger
Glynn Davies
Difficulty
Easy (Grades 1-3)
Duration
1 minute
Genre
Other
License details
For anything not permitted by the above licence then you should contact the publisher first to obtain permission.

The earliest extant source of the melody to Deck the Halls is found in a manuscript compiled by Welsh harpist John Dall (1710-82). The tune itself may be yet older, and is generally accepted as belonging to the Welsh folk song heritage. However, it may not be as old as the fifteenth century, as some writers have claimed, on the basis of the fact that the "fa la la la la" refrain that hearkens back to the tradition of the madrigal.

In 1788, Austrian composer Wolfgang Amadeus Mozart wove the tune into his Sonata in G for violin and keyboard K. 301 (NMA K. 293a), commonly identified as "Sonata No. 18." Mozart may have heard this Welsh folk song during his boyhood visits to England.

In Wales, the tune is attached to a text known as "Oer Yw’r Gwr" (Cold Is The Man) that deals with New Year’s Eve celebrations. The American text of Deck the Halls first appeared, without music, in a New York newspaper, in 1881. How the tune got wedded to the text is uncertain, but by the turn of the century, Deck the Halls as we know it was already part of the American carol tradition. Deck the Halls, with its music, appears in carol collections and on the music "sheets" used by antique music boxes made at that time. It is an unusual carol in that no overt references to Christ or Christmas are made, outside of mentioning "the Yuletide Carol." Deck the Halls is a rousing song of celebration, good times and good cheer, without hint of the more sobering aspects of Christmas celebrations.

Another Welsh folk song, "Ar Hyd Y Nos," is used as the melody for the Christmas carol All through the Night.

This arrangement comes with a Beginners’ third violin part, and an optional bass part for use with string orchestra.

Reviews of Deck The Halls