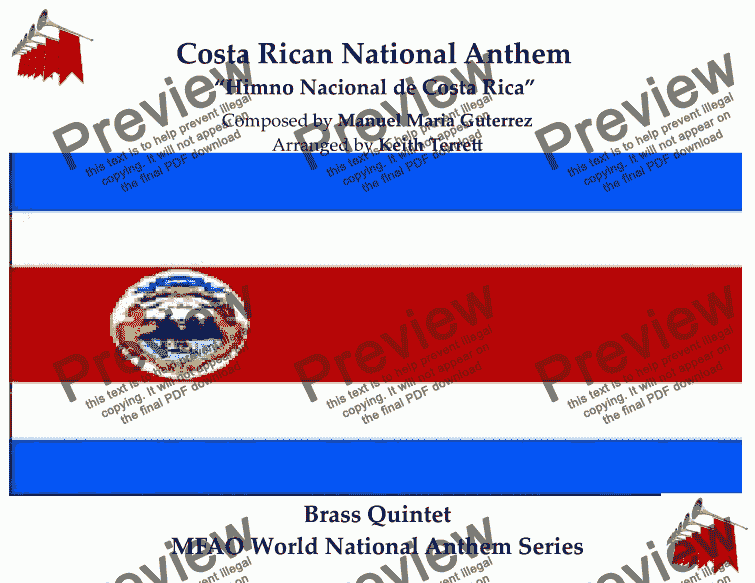 An arrangement of the Costa Rican national anthem for Brass Quintet.

The story of the Costa Rican national anthem is an interesting one. In 1852, the diplomatic representatives of the United States and the United Kingdom were to arrive, and the president of Costa Rica at the time, Juan Rafael Mora Porras, wanted to receive them with the national anthem. However, Costa Rica had no national anthem. Therefore, the president requested that the director of the Costa Rican National Army orchestra, Manuel María Gutiérrez, compose the music for a national anthem. Although Gutierrez insisted he knew nothing about musical composition, he was thrown in prison on the terms that he would be set free once he had produced the piece of music. The resulting composition was played for the first time in the Presidential Palace on June 11, 1852.

In 1903, a contest was held for composing the lyrics to the anthem, and it was won by José María Zeledón Brenes. The music and lyrics were officially declared as the national anthem in 1949.

"Himno Nacional de Costa Rica" (Spanish language, Costa Rican National Anthem) is the national anthem of Costa Rica. It was originally adopted in 1853, with the music composed by Manuel María Gutiérrez. Words by José María Zeledón Brenes: were added in 1900.