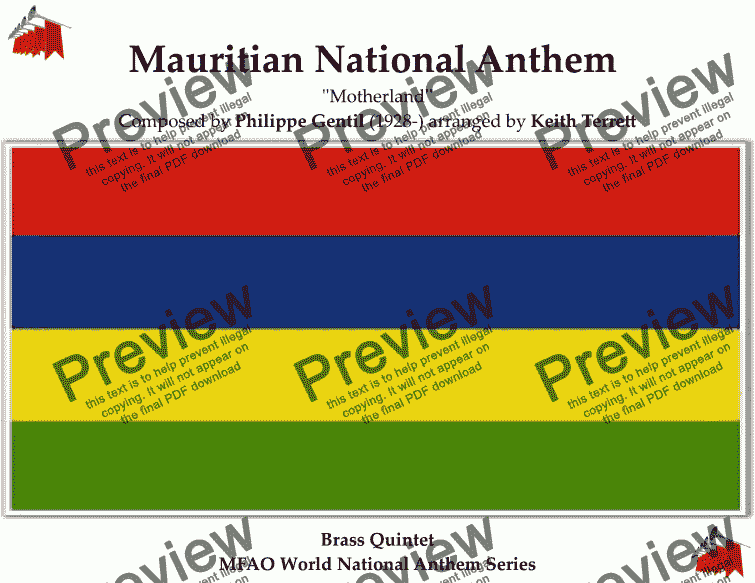 Motherland" is the national anthem of the island country of Mauritius. The music was composed by Philippe Gentil M.B.E. and the lyrics were written by Jean Georges Prosper (Mauritian poet born in 1933). The anthem is short and briefly describes the lucious landscape of Mauritius. It also mentions the qualities of its people: peace, justice, and liberty.

Joseph Philippe Gentil (11 February 1928 – ), is a Mauritian composer best known for composing The Motherland, the National Anthem of Mauritius.

Joseph Philippe Gentil was born in the island of Mauritius, Indian Ocean of Irene Annibal and Eugene Gentil son of photographer Gabriel Gentil. He worked for over 30 years in the Mauritius Police force, more precisely with the Mauritius Police Band as a musician and composer. He was known in his younger days for his comedies played live in open air such as at the Jardin De La Compagnie, Port Louis. He later became well known on MBC TV for his comedy gigs such as in Jacques Dinan show ’Dira Dira Pas’. He has introduced various European and American musical talents to the Mauritian community by performing their songs, such as Fernandel, Bourvil, Glenn Miller Band, Louis Armstrong, Henri Salvador amongst many others. He has composed various marches performed by the Mauritius Police Band which unfortunately, many of his compositions got destroyed when the band’s room in Vacoas burned down.

However one of his greatest compositions remains as the National Anthem of Mauritius, the Motherland which he won as a competition when Mauritius became independent from the British Empire in 1968.

On the day of Independence, 12 March 1968 a national newspaper mistakenly published the name and photograph of Philippe Oh San who was the Mauritius Police Band's band master as the National Anthem's composer. The remaining newspapers were returned to be reprinted with the correction. As a result, it has left the name of Mr. Oh San in the mind of many Mauritians as being the anthem's composer. However it was Mr. Oh San who after hearing Mr. Gentil's anthem being performed by the band musicians, encouraged for the work to be entered into the contest for a new National Anthem and after receiving Mr. Prospers lyrics as proposal for the anthem found that the lyrics actually perfectly matched the melody composed by Philippe Gentil, the two being created separately. Certain recent encyclopedic websites were still naming the anthem's composer as Mr. Oh San and were requested to make the correction.

Philippe Gentil has been the tutor and mentor for many musicians and professional performers for a huge part of his life. He still lives in Mauritius with his spouse Claudette and still teaches music theory to those who can still benefit from learning from one of the great composers of the world.

All anthems in my store are available for other instrumental ensembles, e-mail me your requirements: keithterrett@gmail.com 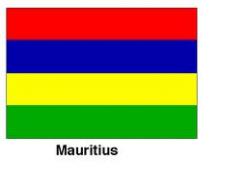