By: Composed by Wage Rudolf Soepratman (1903-1938) arranged by Keith Terrett
For: Brass quintet
This music is in your basket
View basket
Loading... 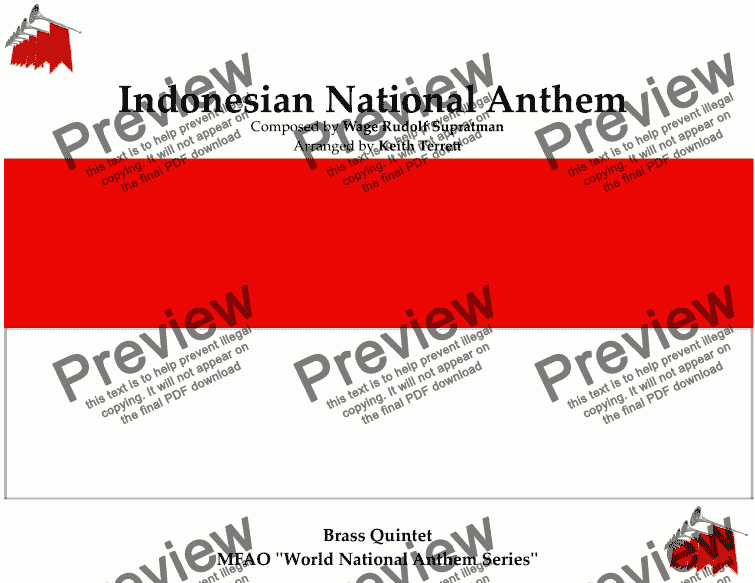 By: Composed by Wage Rudolf Soepratman (1903-1938) arranged by Keith Terrett
For: Brass quintet

Composer
Composed by Wage Rudolf Soepratman (1903-1938) arranged by Keith Terrett
Arranger
Keith Terrett
Publisher
Music for all Occasions
Difficulty
Moderate (Grades 4-6)
Duration
2 minutes
Genre
Classical music
License details
For anything not permitted by the above licence then you should contact the publisher first to obtain permission.

An arrangement of the Indonesian national anthem for Brass Quintet.

Indonesia Raya" is the national anthem of the Republic of Indonesia. The song was introduced by its composer, Wage Rudolf Supratman, on 28 October 1928 during the Second Indonesian Youth Congress in Batavia. The song marked the birth of the all-archipelago nationalist movement in Indonesia that supported the idea of one single "Indonesia" as successor to the Dutch East Indies, rather than split into several colonies. The first newspaper to openly publish the musical notation and lyric of "Indonesia Raya" — an act of defiance towards the Dutch authorities — was the Chinese Indonesian weekly Sin Po.

The first stanza of "Indonesia Raya" was chosen as the national anthem when Indonesia proclaimed its independence at 17 August 1945. Jozef Cleber, a Dutch composer, created Indonesia Raya arrangement for philharmonic orchestra in 1950. This arrangement is widely been used currently for formal and some informal purposes.

In 1928, youths from across Indonesia held the first Indonesian Youth Congress, an official meeting to push for the independence of the nation. Upon hearing about the efforts, young reporter Wage Rudolf Supratman contacted the organizers of Congress with the intention of reporting the story, but they requested that he not publish the story from fear of Dutch colonial authorities. The organizers wanted to avoid suspicion so that the Dutch would not ban the event. Supratman promised them this, and the organizers allowed him free access to the event. Supratman, who was also a musician and also a teacher, was inspired by the meetings and intended to write a song for the conference. After receiving encouragement from the conference leader Sugondo Djojopuspito, Supratman played on the violin the song Indonesia with the hope that it would someday become a national anthem. He kept the script to himself because he felt that it was not the appropriate time to announce it.[4]

Supratman first performed Indonesia on the violin on 28 October 1928 during the Second Indonesian Youth Congress.[5]

Following the Second Youth Congress, the text of Indonesia was distributed by many political and student organizations. The press also played a key role in the publication of the song. On 7 November 1928, the Soeloeh Ra’jat Indonesia daily published the text to the song. This was followed by the Sin Po Chinese weekly on 10 November.[6] In 1929, Wage Rudolf Supratman changed the title of his song to "Indonesia Raya" and appended the phrase National Anthem of Indonesia below it, but the text of the song did not change. Supratman personally printed and distributed copies of the song with its new title through pamphlets. All one thousand copies of the manuscript were sold within a short amount of time to his friends and family.[7]

A businessman friend of his, Yo Kim Tjan, also expressed interest in recording "Indonesia Raya". With Supratman’s consent, Yo created a copy of the song on a gramophone record overseas in order to obtain the best sound quality with the intention of bringing the copy back to Indonesia. However, before Yo was able to do so, Dutch colonial authorities had imposed a ban on the song. Yo was unable to bring the original back but was able to bring home a copy. According to Yo, Supratman had also given him the rights to sell record copies of "Indonesia Raya" through his store Toko Populair.[8]

The neutrality of this section is disputed. Please do not remove this message until the dispute is resolved. (October 2012)

Jozef Cleber a Dutch musician that arrived with a patron of 46 persons of Philharmonic Orchestra under direction of Yvon Baarspul was sent by the Netherlands Government to help the Indonesian Government for music development in Jakarta. "Jos" Cleber (34 years old), in his hometown was an experienced arranger for popular songs, and also successfully for Indonesian pop song arrangements, like Di Bawah Sinar Bulan Purnama and Rangkaian Melati, was asked to make a new arrangement the "Indonesia Raya" anthem by President Soekarno in 1950. Until then, there was no orchestral rendition of the anthem. President Soekarno made an appeal to Cleber to compose a symphonic rendition of "Indonesia Raya". The final rendition is in common use today.

The original recording was recorded by the Cosmopolitan Orchestra under the direction of Jos Cleber, and it was recorded on Phillips tape in 1951 by the Radio of Jakarta. Then it was digital re-recorded in 1997 in Australia based on Jos Cleber partiturs that stored in Jakarta, and it was played again by the Victorian Philharmonic under direction of Addie MS.

In 1951, ownership of the copyright to "Indonesia Raya" came into question. President Sukarno ordered a search for the rightful heir to Supratman. By law, Supratman was the copyright holder of "Indonesia Raya" as its composer. After Supratman’s death in 1938, ownership of the rights to his works fell upon the designated heirs, his four surviving sisters. However, because "Indonesia Raya" was officially adopted as the national anthem of Indonesia on 17 August 1945, the work became the property of the state. In addition, the name of "Wage Rudolf Supratman" must be listed as its creator.

As a national anthem, copies of "Indonesia Raya" cannot be circulated as merchandise to be sold. Consequently, the government had the obligation to obtain all the rights to distribute the song, including the original recording, from Yo Kim Tjan. In 1958, the government obtained the sole right to "Indonesia Raya" from Supratman’s family. The following year, Yo handed the original record of the song to the Indonesian government. With the recommendation of the Department of Education, the government also rewarded Supratman’s sisters with 250,000 Indonesian rupiah each on 31 May 1960.

For more of my original music, great arrangements and all the national anthems of the world, check out my on-line stores: http://www.scoreexchange.com/profiles/keith_terret http://musicforalloccasions.org.uk http://www.sheetmusicplus.com/search?Ntt=keith+terrett