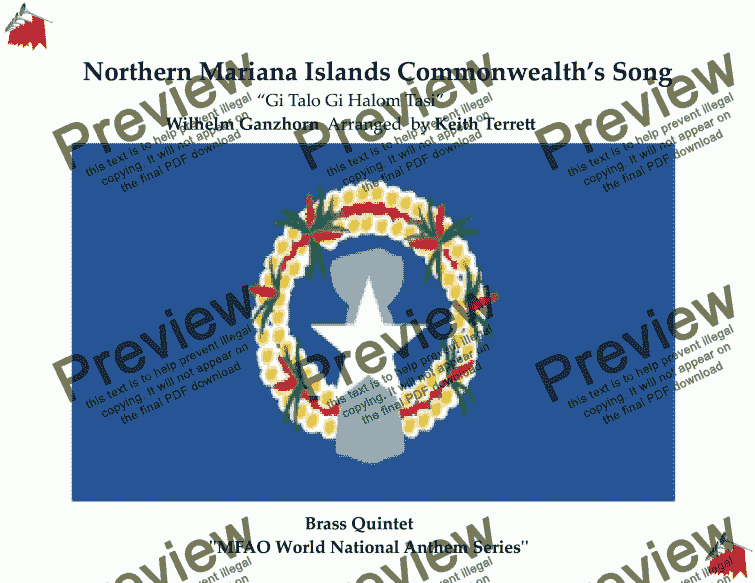 An arrangement of the official anthem of the Commonwealth of the Northern Mariana Islands arranged for Brass Quintet.

The Chamorro lyrics for the official anthem of the Commonwealth of the Northern Mariana Islands was jointly written by the brothers Mr. Jose & Mr. Joaqin Pangelinan presumably around the time after World War II had ended. The Carolinian lyrics for the CNMI National Anthem were written by Mr David Kapileo Peters "Taulaamwarr" the day before the signing of the Covenant in 1976. Mr David Marciano edited the Carolinian lyrics and his contributions were incorporated before being published and recorded. Vicente "Kilili" Sablan Sr., former Mayor of Saipan, assisted by translating the lyrics into English and Japanese for the Rematau band album. The Rematau Band was the first group to sing and record the Commonwealth National Anthem.

During the First Constitutional Convention, a resolution was introduced to compel the new government to proclaim the song as the official anthem of the soon to be created Commonwealth of the Northern Mariana Islands. In 1996, it became the official anthem by virtue of Public Law 10-28, authored in the Tenth CNMI Legislature and signed by then-Governor Froilan Cruz Tenorio into law. Both versions of the anthem are taught to students as well as displayed prominently in official programs and posters. The melody of the song is taken from the German tune "Im Schoensten Wiesengrunde", written by Wilhelm Ganzhorn.

Since the islands are a United States dependency, the national anthem is still the "Star Spangled Banner".