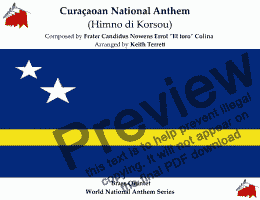 An arrangement of the national anthem of Curacao for Brass Quintet.

The Anthem of Curaçao (Papiamentu: Himno di Kòrsou) is the national anthem of Curaçao. It consists of eight stanzas, although only the first and last two are commonly sung. Its theme is best summed up by the first stanza, praising the grandeur of Curaçao, as small as the island may be.

The lyrics were first written by a friar of Dutch origin, Friar Radulphus, in celebration of the coronation of Queen Wilhelmina in 1898. The song was known as "Den Tur Nashon Nos Patria Ta Poko Konosí" ("In Every Nation Our Fatherland Is Little Known"). During the celebrations, the pupils of a local elementary school, the St. Jozefschool, sang this to the melody of the Tyrolean hymn Andreas-Hofer-lied.

It wasn’t until the 1930s when Friar Candidus Nouwens composed the melody to which the anthem is sung today. For many years since, the song was sung on the Dutch national holiday Koninginnedag (or Queen’s Day), and on other official occasions. In 1978, the government commissioned a group to rewrite the lyrics before it would be adopted as the official anthem of Curaçao. The assumed belittlement of the Island by the Title and the first phrase one of the motifs for the adaptation ordered by the insular government. The website of the insular government of Curaçao cites Guillermo Rosario, Mae Henriquez, Enrique Muller, and Betty Doran as the writers of the anthem’s lyrics.

As for all television and radio broadcasts, the anthem is played at midnight on New Year’s and every day at the beginning and end of transmission. Various radio stations on the island play the anthem at noon as well. The anthem may only be sung in Papiamentu.

The Anthem of Curaçao (Papiamentu: Himno di Kòrsou) is the national anthem of Curaçao. It consists of eight stanzas, although only the first and last two are commonly sung. Its theme is best summed up by the first stanza, praising the grandeur of Curaçao, as small as the island may be.