By: Philip R Buttall
For: Solo Flute + piano
This music is in your basket
View basket
Loading... 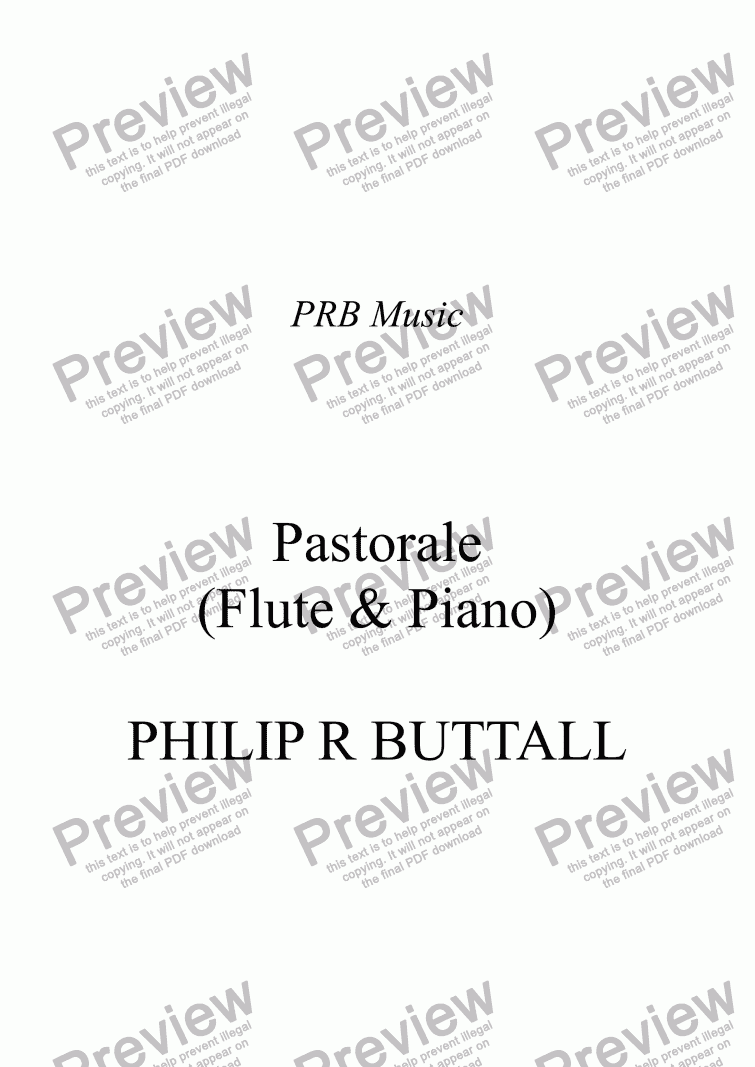 Composer
Philip R Buttall
Year of composition
1967
Publisher
PRB Music
Difficulty
Difficult (Grades 7+)
Duration
2 minutes
Genre
Classical music
License details
For anything not permitted by the above licence then you should contact the publisher first to obtain permission.

This was originally written when I was a student at the RCM. Two of my friends were oboists, and so I wrote this for them, with me at the piano! Len Young lately worked in Education in the Newcastle area, and Angela Escott (nee Whelan) in the RCM library, and we are still in touch. The pastoral quality seems best suited to the oboe, but the two solo lines could be equally well played on flutes, transposed for clarinets, or even played by violins.

I am delighted to say that, after some 35 years, Len and I are now back in contact! This was the original ’story’ which I had on my music store - PRB Music at the former SibeliusMusic.com:

SibeliusMusic does better than ‘Friends Re-united’!

PHILIP had recently received an email from Andrew Passmore, saying how much he, and his young piano students, enjoyed playing some of Philip’s piano duets in the Five-finger series.

Andrew was then in his in his first year at the University of York, but had been a pupil of Queen Elizabeth High School in Hexham, Northumberland. Andrew mentioned, in his email, that he had always received great encouragement from his music master at the school, Len Young, and had noticed that Philip had also dedicated a couple of oboe pieces to a ’Len Young’ - could they indeed be one and the same person, Andrew thought?

Philip managed to find a picture of Andrew’s former music teacher on the internet, and this confirmed that he certainly was the same young student from Northallerton, who was at London’s Royal College of Music with Philip, some 35 years ago! One email later, Philip and Len have got back in touch after many years, and now look forward to filling in the gaps in between!

Andrew since graduated with a first, followed this with a Masters, and is now reaching at Queen Margaret’s School, York, as well as being a busy recital organist. Andrew, too, is a fellow composer on Score Exchange

This version for solo flute and piano seemed a logical extension, especially as the flute part is not overly difficult.