By: arr. Philip R Buttall
For: Solo Tuba in F + piano
This music is in your basket
View basket
Loading... 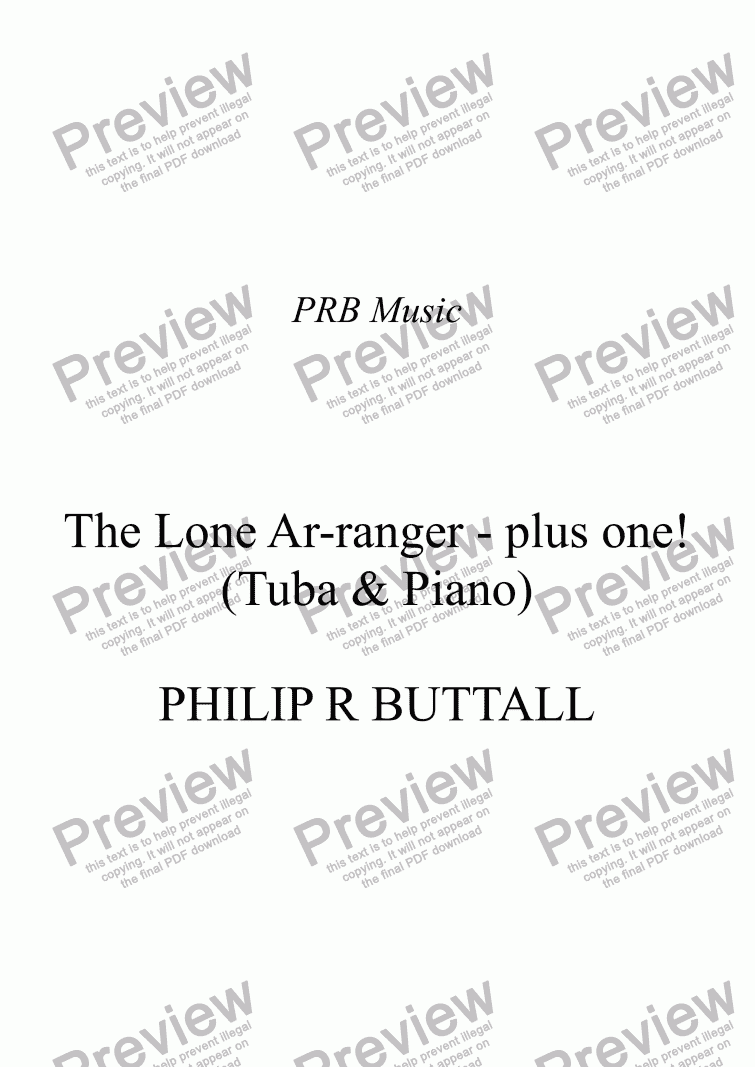 Composer
arr. Philip R Buttall
Year of composition
2013
Publisher
PRB Music
Difficulty
Difficult (Grades 7+)
Duration
3 minutes
Genre
Modern classical music
License details
For anything not permitted by the above licence then you should contact the publisher first to obtain permission.

The Lone Ar-ranger!, although the first piece I ever uploaded to the then Sibelius Music, has remained arguably my most popular piece, for which, over the years, I have continually brought out versions for new instruments, or ensembles.

I already have a Plus one version, which is essentially one for various individual solo instruments, with piano accompaniment. There is also a dedicated version for Flute & Piano.

Most recently, following a contact and request from Australian tuba player, John Szkutko, in Queensland, I have produced this separate version for Tuba and Piano. John planned to include it in a recital, and this has now taken place - in fact, the all-Australian premiere in this format!

You can now watch a great video of the first performance, at Wynnum Hall, Brisbane, on June 30, 2013, at John’s website Voice of the Tuba.

When I first saw the video, I wrote:

’Hi John, many thanks for sharing this with me! It’s certainly something that needs to be seen as well as heard! I just loved the start, when the lady walked across the back of stage, and you looked as if you were thinking, ’What the heck (no doubt stronger!) is she doing in my performance!?’, before we realised that she was the page-turner! A great performance, too, with, as you said, just a few hairier moments en route, but surely what it’s all about! The well-deserved ovation just said it all! Hope it goes as well on Sunday!’ (John’s follow up performance).

’20 minutes before kickoff, my partner told me to go get changed and get ready. This was after setting out all the chairs and other stuff. I was a bit stunned, I had lost track of time. After a quick check with the tuner (and realising everything was flat cause of the chilly weather) I changed in to performance clobber. After walking on stage, taking a bow and setting up, my second cousin (as you saw) walked on stage. I totally forgot about her being the page turner!!! Then I realised I forgot to open my music after starting…

It was an auspicious start but it was a wonderful concert. I had totally forgotten about the page opening incident until I was reminded about it at the end of the concert. I had to blush then laugh. This coming Sunday will be a great one too. I already have a few pre bookings!

Thank you for a wonderful solo! A mate of mine in New Zealand is already interested in this solo, he has your contact details.’

So, perhaps the tuba version might even get a New Zealand premier someday - and you can’t get much further away than that!