By: LEANDER FISHER
For: Piano trio
This music is in your basket
View basket
Loading... 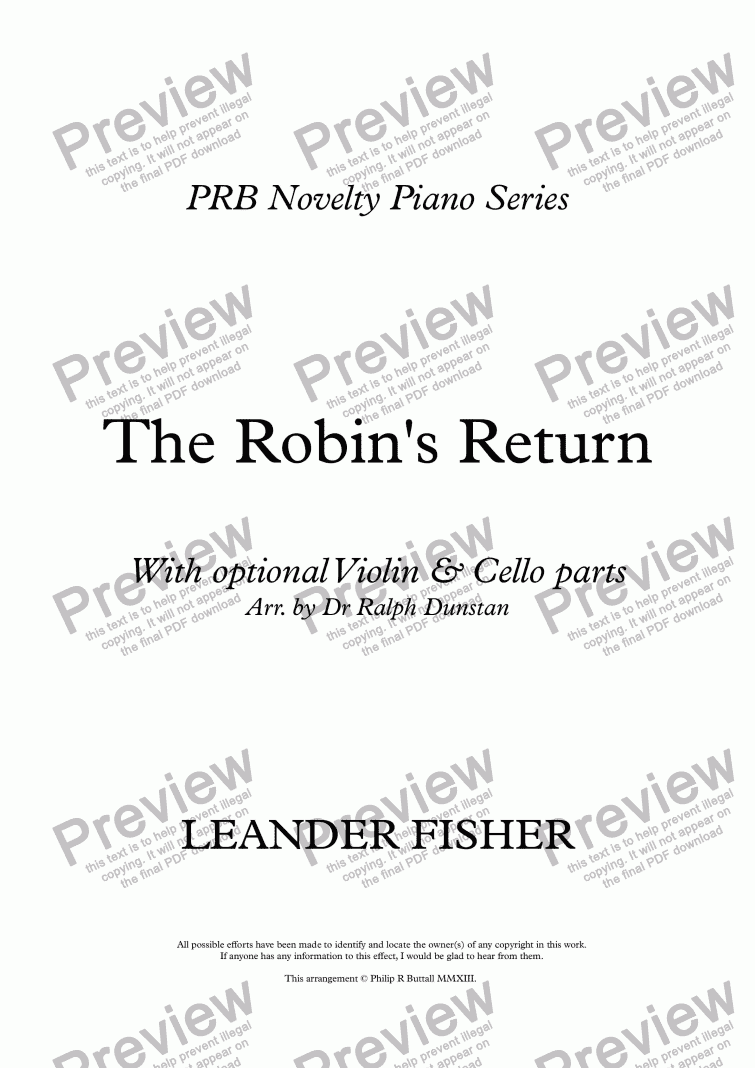 By: LEANDER FISHER
For: Piano trio

Composer
LEANDER FISHER
Year of composition
1912
Publisher
PRB Music
Difficulty
Difficult (Grades 7+)
Duration
3 minutes
Genre
Classical music
License details
For anything not permitted by the above licence then you should contact the publisher first to obtain permission.

When I was young, Christmas, and Family Parties always involved some music-making at the piano.

My Grandma and Grandad, on Dad’s side, often played The Robin’s Return, either Grandma on her own, or with Grandad adding some little embellishments on the top.

I had the music in an original Lilac Series copy - priced at the somewhat extortionate ’6d’ - that is, sixpence in pre-decimal currency, so 2.5p in the present UK system - or would have been, before the half-pence was phased out!

I thought it would be good to make the piece available in my PRB Piano Series, so set about trying to find out about the composer, Leander Fisher.

After a lot of searching on Google, the best I could come up with was that Leander Fisher, the composer, was born in 1850, but there doesn’t appear any reference to when he died.

Given this fact, it would certainly seem that the piece is out of copyright, and in the public domain.

To get further clarification, I contacted the Copyright Manager at one of the UK’s leading publishing houses for further guidance, who replied: ’Unfortunately there is no hard and fast way of finding out when artistic works go or have gone into the public domain. If Leander Fisher lived until the age of 90, he’ll have gone out of copyright at the end of 2010 or last year.

We have published things in the past without certainty on this issue, and have printed wording on the printed scores to the effect of “All possible efforts have been made to identify and locate the owner(s) of any copyright in this work. If anyone has any information to this effect, we would be glad to hear from them.”’

I have therefore done the same here.

The attached picture shows Grandma and Grandad Buttall, from Tottenham, London, whom I always loved seeing!

I have dedicated this version to Grandma & Grandad - in the hope that they’re still up there playing it, somewhere!

I was recently emailed by a Yorkshire-born flautist and teacher, who had emigrated from the UK in 1967, and was now living on Canada’s Prince Edward Island.

She had seen Robin’s Return on my site, and asked me whether I could help trace a version of the piece where a violin and optional cello part were added. Her father used to play the piano part, and she would play along, but using the separate violin part as a guide, as she would play this on her flute instead, altering registers and the occasional double-stopping along the way. She felt that if she could find this version, and play it with a friend, it would bring back memories of her playing it with her Dad.

As the piece held strong memories for me - but here it was for my Dad’s parents, I said I would try to help locate it.

She had found a reference to it on the OCLC World Cat site, but with no indication as to how further to proceed.

I was able to contact one of the library institutions that held the score + parts, and they very kindly agreed to scan everything for me, and emailed it across. The particular library and librarian would rather not be mentioned, simply because they were able to do this as a favour, but would not have the resources if everyone started to ask them for similar requests. I am, however, very grateful to them!

I have slightly tweaked my original transcription in the light of this other version (minor chordings, and added repeats), and have made available this separate score in Piano Trio version on Score Exchange.

I have additionally discovered a working for piano duet, which I shortly hope to upload.