Tales From The Vienna Woods 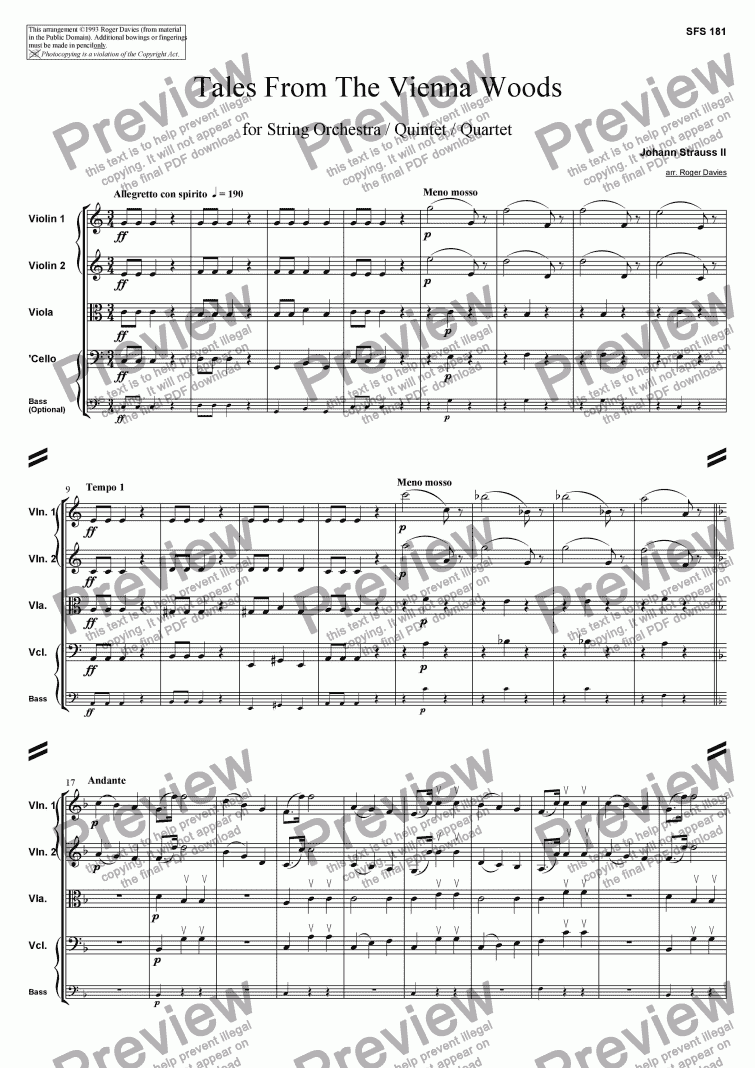 Tales From The Vienna Woods

Composer
Johann Strauss II
Year of composition
1868
Arranger
Glynn Davies
Difficulty
Moderate (Grades 4-6)
Duration
4 minutes
Genre
Classical music
License details
For anything not permitted by the above licence then you should contact the publisher first to obtain permission.

Vienna, the waltz and the Strauss family are inseparable entities. The waltzes of Johann Strauss, Sr. (1804-49) evoked the air of the Viennese countryside, beer gardens and Heurigen. Those of his eldest son, Johann, Jr., at first had the same rhythmic vitality and brief melodies. After 1860, however, this would change. The younger Strauss infused the traditional waltz with a new vitality and sophistication that reflected the glittery, hedonistic spirit of nineteenth-century imperial Vienna. He melded the rhythmic drive of his father's works with Joseph Lanner's (1801-43) lyricism, and changed the rhythmic emphasis from the beat to the measure. Strauss' seemingly unlimited melodic invention prompted him to compose melodies that did not fall into the traditional four, eight, or sixteen measure patterns of earlier waltz tunes. He maintained the basic outline employed by Lanner and his father: a slow introduction, (typically) five pairs of waltzes and a coda, but increased the length of each section and the organic unity of the whole. Strauss' orchestration is often picturesque, especially in his introductions, while that of the waltzes themselves approaches a Mozartian clarity. In 1860 Strauss began conceiving his waltzes with an international audience in mind, occasionally electing to "illustrate" aspects of his homeland. Arguably, the most important of these is Geschichten aus dem Wienerwald (Tales from the Vienna Woods), Op. 325, one of Strauss' most famous waltzes. The "Wienerwald" evokes not so much the Vienna Woods themselves as it does the Austrian Heurigen, small establishments outside Vienna that serve partially aged wine and food associated with the countryside. Clearly a concert piece, "Wienerwald" does not exhibit predictable patterns of repetition or sixteen measure melodies, and seems nearly through-composed.

Reviews of Tales From The Vienna Woods