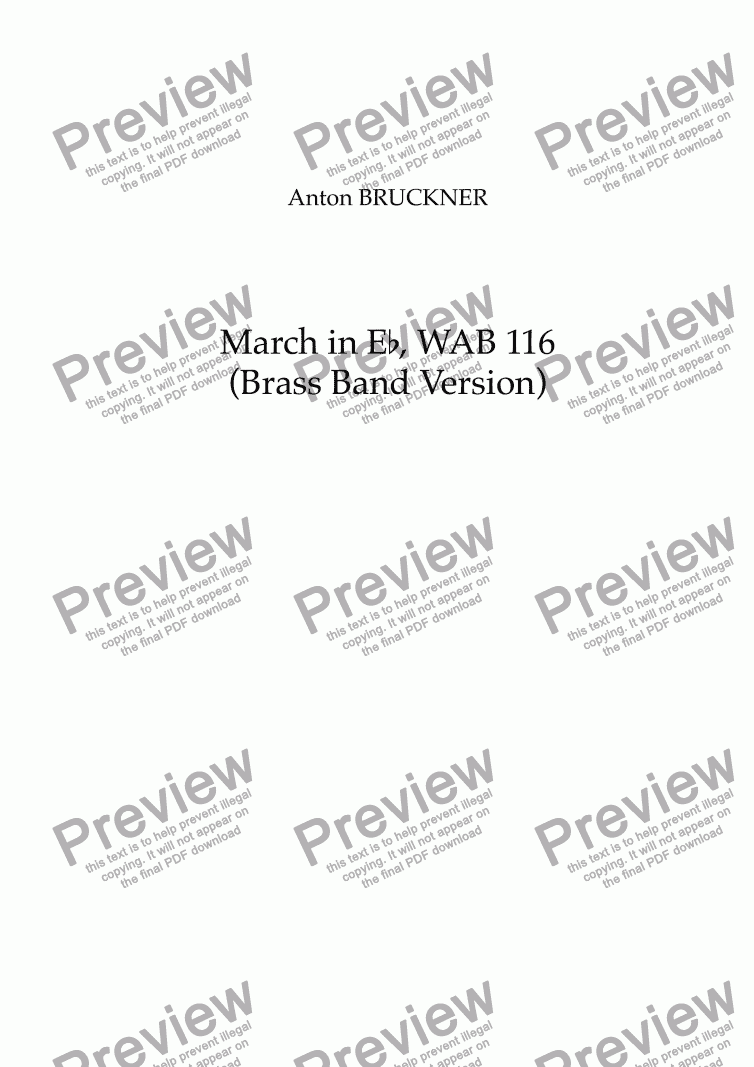 Price:
(+ VAT when applicable. Price is for score onlyPrice is for score and complete set of 19 parts)
Note: The publisher requires a minimum purchase of 1 licenses
Change currency...
You are purchasing high quality sheet music PDF files suitable for printing. You are purchasing a this music. Be sure to purchase the number of copies that you require, as the number of prints allowed is restricted.

During Bruckner’s tenure as the Linz, Austria cathedral organist (1856-68), he also laid his foundation for music composition. He spent the first 6 years studying music theory with Simon Sechter, Austria’s preeminent expert at the time. After graduating with honors in 1861, Otto Kitzler, the local orchestra’s principal cellist, became its conductor. This fortuitous timing allowed Bruckner to study large-scale form and orchestration with him.

In 1862 Kitzler gave Bruckner Bela’s "Apollo" march as a model. Bruckner scored it for the typical Austrian infantry wind band, and for over a century, the musical public mistook it for his own work. Having then heard Kitzler perform much of Wagner’s music in Linz, the expanded harmonic and tonal palette greatly impressed him. In December 1865 he took Bela’s march form and added his expanded harmony. Having shattered the 4-chord mold, the local bands promptly rejected Bruckner’s march despite his growing fame.

Thanks to the Austrian National Library for posting a digital scan of Bruckner’s manuscript score. Wind band instrumentation has drastically changed since 1865, so Bornhoft arranged a modern wind band version in 1996. Nevertheless I went ahead and arranged this with my usual articulation, dynamic, and scoring practices. I have posted a PDF of my edition of the original manuscript at http://www.abruckner.com/Data/downloads/scoresorchestraltr/winds_and_brass/Tousignant/marchineflat/scoretranscribedfr/bruckner_march_orig_inst.pdf