Sign in / Register
HomeInstrumentationsString quartetA Thousand And One Nights

A Thousand And One Nights 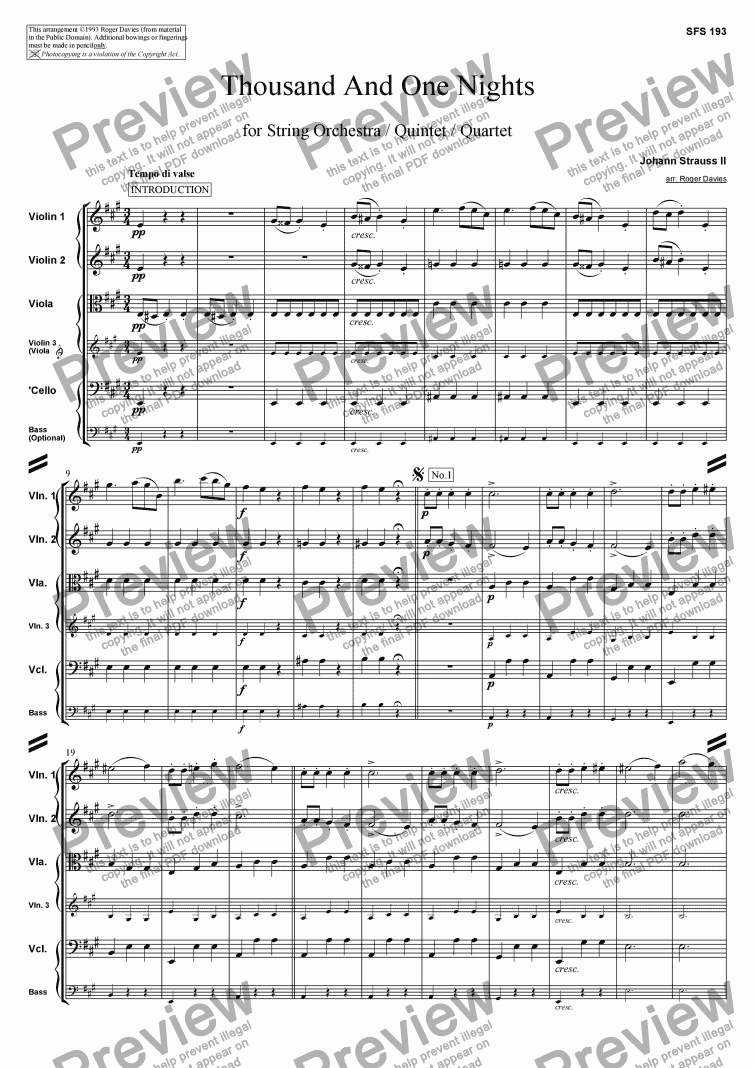 A Thousand And One Nights

Composer
Johann Strauss II
Year of composition
1871
Arranger
Glynn Davies
Difficulty
Moderate (Grades 4-6)
Duration
5 minutes
Genre
Classical music
License details
For anything not permitted by the above licence then you should contact the publisher first to obtain permission.

Vienna, the waltz and the Strauss family are inseparable entities. The waltzes of Johann Strauss, Sr. (1804-49) evoked the air of the Viennese countryside, beer gardens and Heurigen. Those of his eldest son, Johann, Jr., at first had the same rhythmic vitality and brief melodies. After 1860, however, this would change. The younger Strauss infused the traditional waltz format and sound with a new vitality and sophistication that reflected the glittery, hedonistic spirit of nineteenth-century imperial Vienna. He melded the rhythmic drive of his father's works with Joseph Lanner's (1801-43) lyricism, and changed the rhythmic emphasis from the beat to the measure. Strauss' seemingly unlimited melodic invention prompted him to compose melodies that did not fall into the traditional four-, eight-, or sixteen-measure patterns of earlier waltz tunes. He maintained the basic outline employed by Lanner and his father: a slow introduction, (typically) five pairs of waltzes and a coda, but increased the length of each section and the organic unity of the whole. Strauss' orchestration is often picturesque, especially in his introductions, while that of the waltzes themselves approaches a Mozartean clarity.

Since the premiere of his first operetta, Indigo und die vierzig R?uber (Indigo and the Forty Thieves), Strauss extracted dance numbers from his stage works and published them as individual compositions. After the February 10, 1871 premi?re of Indigo, Strauss gleaned nine excerpts from the operetta for use as parts of dance pieces, Opp. 343-51, of which "Tausend und eine Nacht" (A Thousand and One Nights), Op. 346, is the best known. Although the public enthusiastically received Indigo, critics generally blasted the libretto, resulting in several revisions over the years, the most successful of which is by Ernst Reiterer in 1906, featuring an entirely new libretto and entitled "Tausend und eine Nacht."

Please note that this arrangement does not play back correctly, due to the D.S. signs not being performaed. This arrangemet comes with a supplemental third violin part, and an optional bass part for use with string orchrestra.

Reviews of A Thousand And One Nights