Sign in / Register
HomeInstrumentationsString quartetOrchestral Suite No.2 - 4. Bourree I and II 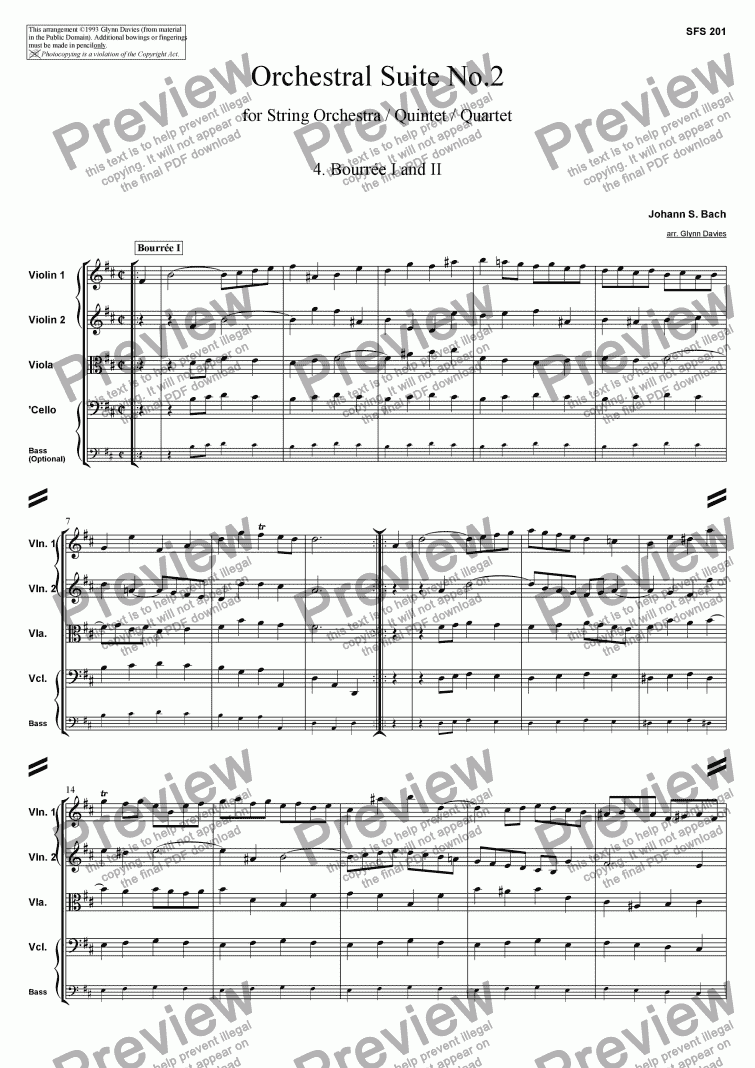 Composer
Johann S. Bach
Year of composition
1738
Arranger
Glynn Davies
Difficulty
Moderate (Grades 4-6)
Duration
2 minutes
Genre
Classical music
License details
For anything not permitted by the above licence then you should contact the publisher first to obtain permission.

It is unknown when exactly Johann Sebastian Bach wrote his Suite for Orchestra No. 2 in B minor, BWV 1067. It is a vibrant and fast-paced work, leaning towards the entertainment side of pure music. This suite is one of four such works that the composer wrote in his lifetime. Much of his works disappeared after his death in 1750, or it was dispersed among inheritors and friends, as well as discontinued editions of music and private collectors of ancient scores. In the middle of the nineteenth century, a revival of his music took place. People began collecting whatever scores and information they could about the man, and this was the first time such a revival happened. Scholars and musicians had never approached the work of a composer in this manner before; this was the birth of musicology. Bach's work was still a subject of investigation at the end of the twentieth century, and though an enormous amount of information had been collected at this point, a great deal of information about the music can still only be conjectured. One of the few things that one can say about Bach is that for a composer of his time, having written only four orchestral suites (also called overtures) says something about what kind of composer he was. Bach was not even slightly opposed to writing music for more money or power, but was less forthcoming with light music; he did not like it much. All of the lighter music he wrote was never published, including these overtures. Telemann, the most famous composer working in Germany at the time, wrote over 130 surviving suites for orchestra, and probably wrote over 1000 in his lifetime. These works were good for business, but Bach was more comfortable writing church music or works featuring striking fugal challenges. This piece gave him a chance to write for transverse flute, which had just begun to be in fashion. On the whole, he seemed to love good counterpoint more than anything else.

Nonetheless, these four works appeared, and they are fine examples of the lighter style, and display some of the interesting ways that the composer would approach the festive side of music making. These suites are a form derived from a collection of French ballets and operas. They usually begin with an overture in the French manner, regal and poised, followed by a collection of dances. French music and culture was the rage for much of Germany and other European countries. People emulated France as much as possible, but Bach's ear seems to have been more easily fixed on Italy. The music of Vivaldi and the Scarlattis (father and son) are constantly asserting themselves in Bach's music. He seems to have been attracted to the Italian brilliance of harmony, and the way they could make speedy ostinatos inject more excitement into an already lively beat. It was simply the most visceral music in Europe at the time, and when Bach added it to anything, sparks flew. In his Suite for Orchestra No.2 one can hear Vivaldi's concerto style in the Sarabande and the Minuet. Nothing is turgid about this piece. It was probably written around 1720, certainly before 1723, when he began work at Leipzig. He was usually too busy to write much secular music, unless it was of very high quality. Listeners should not shy away from these orchestral suites because they are not aching with the profundity of Art of Fugue. They are simply charming, summery pieces.

Reviews of Orchestral Suite No.2 - 4. Bourree I and II