By: Orestes Sindicin (1828 - 1904) Arranged by Keith Terrett
For: Brass quintet
This music is in your basket
View basket
Loading... 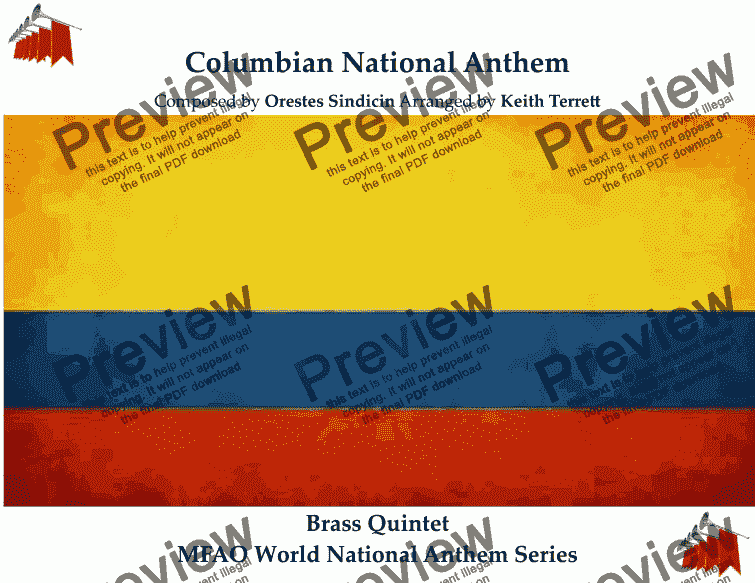 Composer
Orestes Sindicin (1828 - 1904) Arranged by Keith Terrett
Arranger
Keith Terrett
Publisher
Music for all Occasions
Difficulty
Moderate (Grades 4-6)
Duration
2 minutes
Genre
Latin music
License details
For anything not permitted by the above licence then you should contact the publisher first to obtain permission.

The national anthem of the Republic of Columbia arranged for Brass Quintet. If you need this or any other anthem for a different group, e-mail me your requirements:keithterrett@gmail.com

Himno Nacional de la República de Colombia (National Anthem of the Republic of Colombia) is the official name of the national anthem of Colombia. The anthem, commonly known as ¡Oh gloria inmarcesible! (O Unfading Glory), was largely the creation of José Domingo Torres, an actor from Bogotá, who took a poem written by former Colombian president Rafael Núñez and asked a friend, opera singer Oreste Sindici, to set it to music.

The official announcement came in the form of Act 33 of October 28 of 1920. The law 198 of 1995, which legislates national symbols, its broadcast became mandatory for all radio and television in the country both at 6:00 am and at 6:00 pm (the latter half, at various times for private open signal and not applicable to national TV channels by cable), and public addresses of the President of the Republic and other official events. It is considered offensive to video tape the singing of the Colombian national anthem outside of Colombia.

By law, radio and television broadcasts must play the national anthem at 6:00 am and 6:00 pm in the following manner: Chorus, first verse* and chorus once again. This is also how it is customarily performed in all public, political, and other official events.

Although the first verse is usually sung in between choruses, any of the eleven verses may be used. The anthem must be played chorus-verse-chorus regardless of which verse is selected.

In ceremonies of the Colombian Artillery, the last verse is used instead of the first verse.