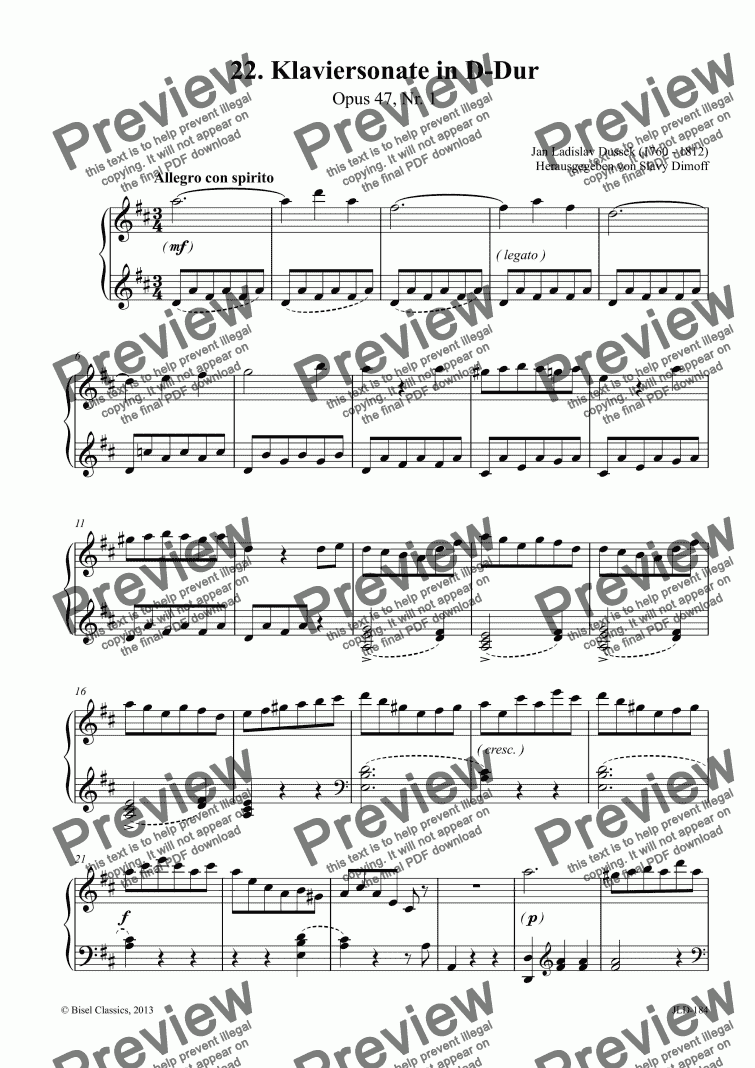 Composed in the year 1801 the two Sonatas Op. 47 clearly originated in a transition phase in Dussek`s life. The successful career the celebrated pianist and composer had been able to build suffered a dramatic twist due to drastic changes that affected his private life as well as his business endeavors. The birth of his daughter Olivia Francisca in London, his adopted place of residence, had made him a happy father. Yet the failure of his joint venture music publishing business "Corri, Dussek & Co", which he had been running with his father-in-law, forced him to leave England in order to escape legal prosecution. Because of failing to pay back his undeniable and huge debts Domenico Corri ended up in Newgate Prison, and even the librettist Lorenzo da Ponte, who agreed to help Dussek out with a sizeable amount, went bankrupt. At the time his daughter was born, his second marriage to the singer, pianist and harpist Sophia Corri was more than shattered, and the separation a mere formality. Yet, surprisingly so, Dussek was able to maintain his artistic ego, his creative power and his extraordinary ability as a concert virtuoso throughout those hard times, and managed to settle down in Germany anew. It is certain that the acquaintance with his new patron, Prince Louis Ferdinand of Prussia, which he made in February 1800, contributed a great deal. Dussek traveled to many German towns giving concerts as a celebrated virtuoso and taught composition to the Prince. Soon a deep friendship developed between Louis Ferdinand and Dussek, which lead to numerous nights of partying and musical orgies… Dussek became publisher of the Prince’s compositions, even though they had initially been intended only for the private edification of the composer and his friends. Louis Ferdinand was a marvelous pianist himself, and an ardent admirer of Beethoven, who in turn dedicated some major works like his third piano concerto to him.

Interesting background information about the performance of both Sonatas Op. 47 may be retrieved by consulting historic performance practice. Here Dussek was a trendsetter in more than one way. For instance it is said that he was the first concert pianist to place the piano sideways on the stage in order to make the audience contemplate not his back, but his face. This change in performance practice did not only add immensely to the experience of the audience, but also tells a story about the newly evolving self-image of the pianist as virtuoso and celebrated star, gradually moving away from the role of medium to merely mirror the intention of the composer, and developing a desire to express and also display innermost emotions. It was Dussek who gave the British piano maker Broadwood the idea to expand the range of the piano beyond the five octaves common in Mozart`s time to reach at first five and a half, and eventually even six, and he was reportedly the first pianist who played a Broadwood extended grand piano in concert. Considering the fact that already in 1794 Dussek had his hands on a "modern" extended piano featuring a richer spectrum of sound and a more solid build, and that Beethoven received his Broadwood Grand only in 1807 (a personal gift by the manufacturer), the cutting edge position Dussek held on reentering the German cultural scene after his long years in London becomes evident. Most of his compositions that originated in the London period actually possessed two variants of many right hand phrases, intended for optional performance on the modern extended version pianos as well as on traditional instruments with five octaves. Even though composed in a later phase, the two Sonatas Op. 47 do not exhibit ossia passages, because the new standard just had not reached Germany yet.

In the Sonata No. 1 of the two part opus in D-major we have another work at hand that, after Mozart`s variations KV 573 from the year 1789, processes the thematic material of Jean Pierre Duport`s Menuetto (Duport was a celebrated cellist and director of the Royal Court Music of Potsdam). The new spirit of romanticism shines through in both sonatas featuring significant contrasts to the typically composed style of the First Viennese School. We find unexpected modulations into remote keys as well as frequent use of chromatic material and typical romantic expression markers such as the expressive and playful use of dynamics. The first Allegro con spirito movement of the sonata in D- major surprises with daring modulations in the minor part and virtuoso elements that certainly demand a crisp touch and brilliant dexterity. The slim and almost transparent structure that yet never appears trite catches the eye and ear. The brief Adagio with its full sostenuto espressivo style chords very much like a romantic chorale point out Dussek`s role as precursor of romanticism. With its dotted rhythm theme the Rondo a la militaire projects the image of gaudy life at the military camp. Already the first movement Allegro ma moderato espressivo of the sonata in G-major appears as a treasure trove for unexpected and therefore the more refreshing harmonic turns. With its dynamic effects (e.g. light and shadow in the forte/piano expressive markings) the Rondo with the indication Andantino con moto highlights Dussek`s evident feel for the pianistic idiom. Both Sonatas Op.47 are a part of his extensive work for piano solo with among others 35 sonatas, 12 sonatinas, 23 rondos and 23 variations and due to their unique quality deserve to be performed on the concert stages of the world.