Sign in / Register
HomeInstrumentationsSolo instrument10 Studies or Caprices for Violin

10 Studies or Caprices for Violin

By: Charles-Auguste de Bériot (1802 - 1870) Herausgegeben von Slavy Dimoff
For: Solo instrument (Violin I)
This music is in your basket
View basket
Loading... 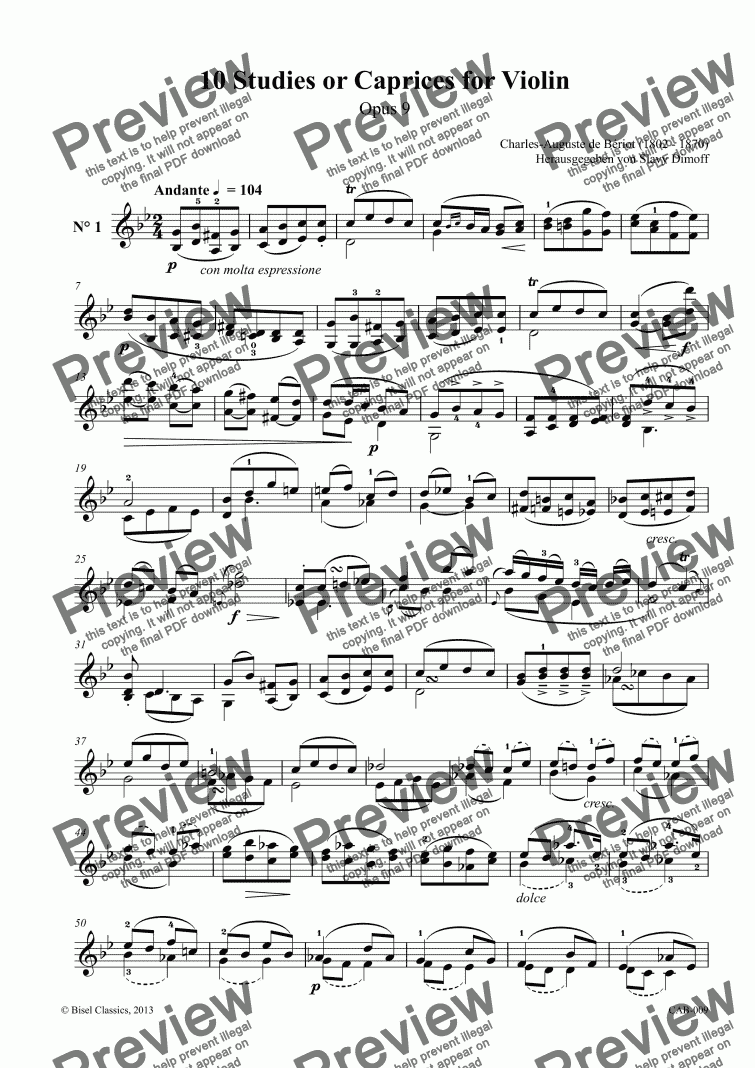 10 Studies or Caprices for Violin

Reflecting upon the biography of Charles Auguste de Beriot the most striking detail that catches the eye are the calamities the artist suffered throughout his life. He lost his father and mother at the tender age of nine and had to come over the tragic death of his beloved, the singer Maria Malibran, only a short time after they got married. No small wonder he was praised by biographers such as the American writer Henry Charles Lahee (1856-1953) because of his strength of character and strong principles.

It was the close friendship with the philosopher and teacher Jean Joseph Jacotot (1770-1840), that gave him the strength to significantly contribute as musician and composer, teacher, virtuoso at the violin and author of a much valued violin method. With his assumption of the intellectual sameness of all mankind Jacotot created the postulate of the "ignorant educator". According to this the hitherto assumed importance of the teacher as imparter of knowledge resulted as an illusion. He found out that essentially the person explaining requires the ignorant and increases the ignorance of the pupil by adamantly holding his position. Jacotot demanded that the support of the scholar`s confidence in his/her inborn intelligence be one of the principal duties of the teacher. His new approach nurtured by the ideas of the Enlightenment gave a valuable impulse towards a reform of pedagogy that carries a strong potential up to our present day.

At the age of nineteen Beriot had moved from his home town Leuven to Paris, to study violin with the virtuoso Pierre Baillot at the conservatory for a short time only. In cooperation with the eminent masters at their instrument, Pierre Rode and Rodolphe Kreutzer, he had been the author of a trend-setting violin method. By dedicating the "Dieci studi o capricci per violino solo" to Baillot (he died in 1842) Beriot paid a reverence to his much appreciated master. Currently we have no information concerning an earlier date of publication, but it is safe to assume that the received edition by Ricordi (Milan) from the year 1854 is not the first edition of the work. The British publisher Boosey came up with another composition of Beriot as op. 9 ("Sixth air with variations for the violin and accompaniments of orchestra (sic) or piano forte") in 1825, and so the actual time of origin of the "Capricci" lies probably around those years, when Beriot was travelling and performing in England.

In 1826 Beriot moved to London and was able to gain considerable success in his concert tours. It is remarkable that he could thrill the audience by almost exclusively performing his own compositions. His presentations were highly original, his style was marked by flawless execution and perfect command of the "cantabile" style, the singing melody so much sought after. With his tour through England he preceded the idol of his study years, the master at the violin, Paganini, by about five years. Nevertheless Beriot made a lasting impression on the British audience, and was equally praised for his artistic performance in major cities and in the province. The Concert Etudes op. 9 were most probably part of his repertoire during the tour through England.

They contain many of the techniques and expressive elements that are so typical for virtuoso romantic violin music. Each study is devoted to one, maximum two technical topics. Didactically the "Dieci studi" present themselves as a valuable addition to the pedagogic standard opus "24 Caprices for Violin" by Piere Rode (c.1822). But Beriot`s studies don`t just contribute to any didactic schedule for advanced pupils. Unlike many odious etudes they don`t contain technical elements only. With an abundance of surprisingly fresh harmonic developments and a treasure of charming melodies created by a "master of the vocal phrase" any diligent scholar is guaranteed to not just practice for his quiet chamber. Beriot`s "Studi capricci" offer a valuable contribution to the training of any advanced student, but they equally serve as a welcome addition to create a diversified romantic concert repertoire. The new edition of another composition of Beriot by Bisel Classics creates an impulse towards appreciation of another remarkable piece for Solo Violin at risk of being forgotten.

Reviews of 10 Studies or Caprices for Violin