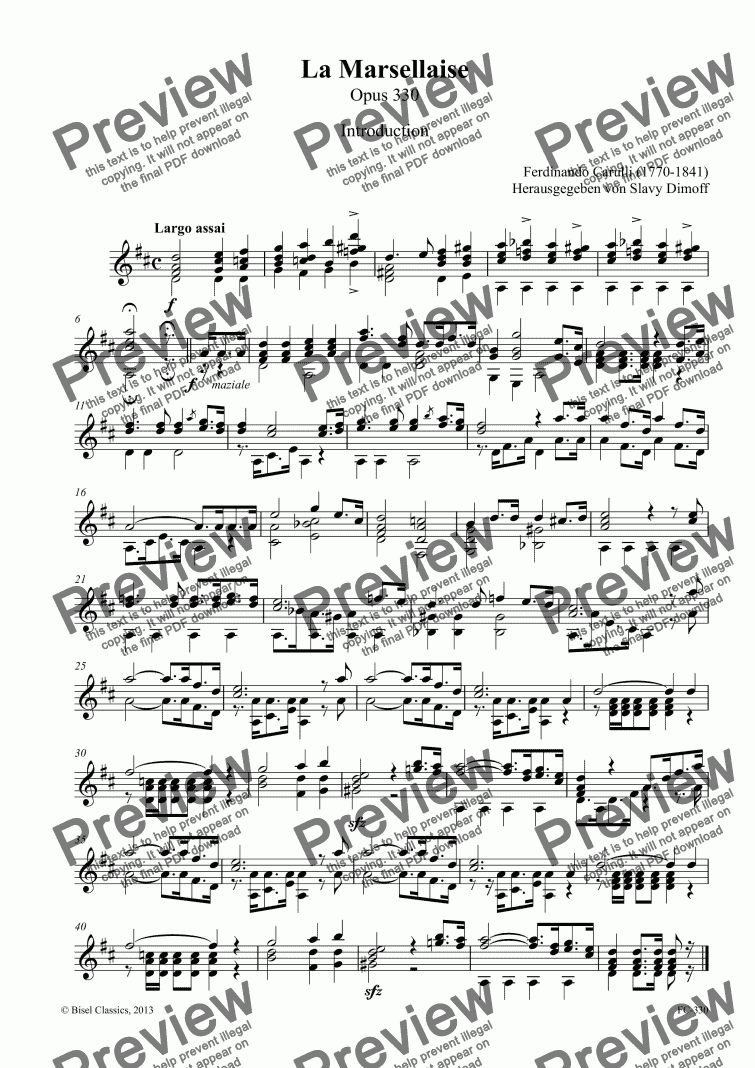 Ferdinando Maria Meinrado Francesco Pascale Rosario Carulli: this is the full and melodious name of a master of the classical guitar and pioneer of his art. Carulli managed to increase the reputation of this domestic music instrument, which was previously often intended for mere accompaniment purposes, to the heights of a solo instrument through his tireless endeavors as a virtuoso and composer. Next to Aguado, Sor and Carcassi, Carulli is rated among the founders of the modern art of guitar playing. Being a teacher much in demand in Paris, the musical capital of the time, he made a valuable contribution by writing his Method for Guitar Op.2 in 1810 that is still used today for guitar studies and that was an enormous success at the time. Carulli also wrote a treatise on harmony for the guitar and an essay on voice accompaniment on the guitar. He was of the opinion that the guitar is the ideal instrument to accompany the human voice. Next to numerous chamber music pieces (like his much appreciated works for flute, violin and guitar, but also his compositions for other combinations such as guitar and piano or harp) his more than 400 works surprisingly contain only a small number of pieces for voice and guitar. The present work was not exactly written for voice and guitar. It presents the popular form of a theme with variations, that especially in the variations poses quite a few technical challenges for the performer to prove his/her finger dexterity and brilliance. Here Carulli, as true ambassador of virtuoso guitar music in the salons of Paris, did indeed remain true to his vow and placed the guitar as “all-rounder” onto a pedestal by gallantly transferring the pompous martial melody onto that graceful instrument. One should also try to keep in mind that the historic instruments of the age were a great deal narrower and smaller than the guitars of today. We may assume though, due to the creation of the work during the radical transition period of the July Revolution (Paris, 1830), that brought the Marseillaise to new popularity after its ban during the Bourbon Restoration, that those politically loaded tunes may have caused some among the audience to burst into song. Already in 1792 the Marseillaise had been written by Claude Joseph Rouget de Lisle and was declared the French national anthem on July 14th, 1795. Napoleon changed this though in 1804 by declaring Le Chant du Depart the new national anthem. After a changeful period the Marseillaise regained its position as the French national anthem only in the times of the Third Republic (1871- 1940). By virtue of its origin in 1830 the composition may be classified as a memorable stepping stone in the history of the Marseillaise. Not to be misinterpreted as a clue about historic performance practice, but as a useful addendum towards a meaningful interpretation of the phrases of the theme, the first verse of the Marseillaise is quoted below.

Presuming rather high expectations in the perfection of sound that applies to pieces of the classical era, Carulli`s Op. 330 constitutes a proper challenge even to advanced students. This assertion is based on the assumption that there is no limit to brilliance of interpretation, especially as far as the variations are concerned. It is interesting to consider the additional information that Carulli (as opposed to Sor and Carcassi, who believed in the traditional method of playing with the fingertips) was among the first to push the playing style with nails. This is definitely another reason for aiming to achieve the perfect “polished” sound. We do find technical particularities and “touchstones” of perfect guitarist finger style in the parallel thirds of the first variation, as well as in the sporty ligatures of the third one. The fourth variation is dominated by features of color and sonority and as expected eventually leads towards a glorious finale. Carulli composed the work at the age of 61, this being a phase in his life that was far from being as eventful as his first years in Paris, when he was plowing a lonely furrow as a virtuoso guitar player in the salons of Paris. He disliked playing in public by that time and had given away his position as the “first guitarist” in town to the younger Carcassi. Yet this composition once more displays Carulli`s ability to emphasize the strengths of the guitar as a soloist instrument by using a typical fluent idiom perfectly positioned throughout. Depending on the choice of velocity and the degree of perfection, the composition lends itself equally to amateurs as well as to professional concert guitarists and serves as an ideal addition to any classically oriented concert performance, last but not least due to the popularity of the theme.