By: Anton Liste (1772-1832) Herausgegeben von Slavy Dimoff
For: Solo instrument (Piano)
This music is in your basket
View basket
Loading... 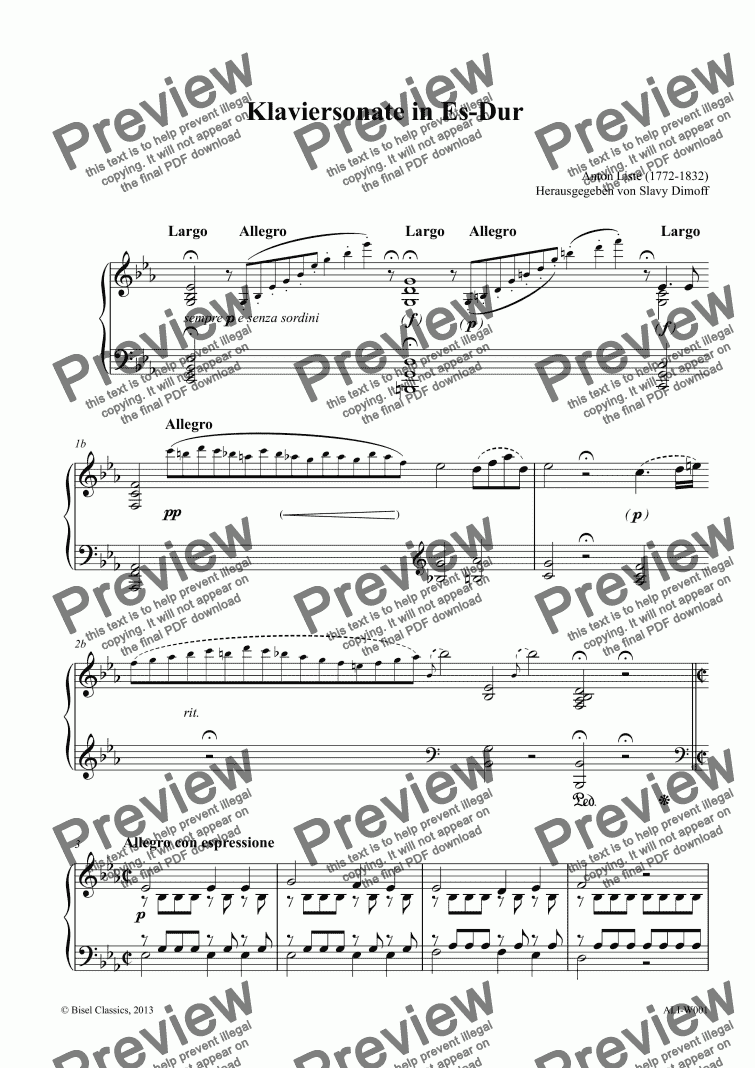 Anton Heinrich Liste grew up in the town of Hildesheim in Lower-Saxony and was the son of the local organist at the cathedral. He received his first music lessons from his father. Like many musicians at that time, Liste, too, felt attracted by the music capital Vienna and moved there at the age of 17 to broaden his knowledge of composition with one of the most prominent teachers in town, Johann Albrechtsberger. Doubtlessly the brief period Liste spent studying in Vienna under Albrechtsberger`s more or less direct supervision became his formative years as an artist. At that time Albrechtsberger (rated as an expert for counterpoint) was still in his position as the 2nd court organist, and was listed by Mozart shortly before his death as his favorite successor to the post of assistant to the chapel master of St. Stephens Cathedral. Due to this close affiliation it is often assumed hypothetically that Liste took lessons with Mozart. We are never going to be able to unravel the mystery of the teaching timetables of the “trendsetters” of the First Viennese School, and yet it is more than probable that there was some sort of cooperation and mutual influencing among teachers. So it is at least safe to assume that students were directly influenced by great musicians and personalities who were top-notch artists at the time and also friends. We will also never find out why exactly young Liste ended his years of study in Vienna so soon and moved back to his old hometown of Hildesheim, where he ended up barely able to make a living by giving music lessons.

As the music teacher at the house of Count Clemens August von Westphalen in 1793, Liste was able to find himself that secure post with a noble sponsor and patron that was considered so essential by most musicians at that time. Soon he also found personal happiness and married Louise Fricke in 1798, and one year later the young couple was blessed with a son. But alas, this bliss did not last long, as in 1801, having just barely started his family life, Liste had to mourn the death of his wife and turn his child over to his grandparents’ care. Understandably so in this situation he was looking for a change of scenery and applied for the job as director of music in Zürich. Liste found a benevolent advocate in the composer and editor Hans Georg Nägeli (1773 -1836). From 1804 until 1807 Liste held the post of director of music at the Züricher Musikgesellschaft, a predecessor organization that would become the group known today as „Allgemeinen Musik-Gesellschaft Zürich,“ which emerged in 1812 out of various small music societies. In order to get a better understanding of the spiritual background Liste relished in those early years in Zürich (the time of origin of both sonatas) it may help to keep in mind the great influence his patron Nägeli had on the cultural life of the city. He is rated as founder and promoter of choral singing in Switzerland and for that same reason is often referred to as the “father of singers”. He was an ardent advocate of the teachings of Pestalozzi, and championed the education of the masses through music all his life. As one of the most eminent publishers in all the German speaking regions Nägeli composed and edited choral literature, that was light enough to be performed by amateurs. With the lectures he held at Frankfurt am Main in 1826 - „Vorlesungen über Musik mit Berücksichtigung der Dilettanten“ – “Lectures about music with respect to dilettantes” [ title translated by the author]- he made a valuable contribution to music aesthetics.

Liste felt comfortable in these surrounding and stayed in Zurich for the rest of his life, yet he did quit his job as director of music after three years. In the years to come he significantly contributed to the enhancement of the musical culture of the city: he founded his own little choir, the “Kleine Musikgesellschaft” (the “Little Music Society”) [name translated by the author], and staged operas like Mozart`s “Magic Flute” and Rossini`s “Mose in Egitto”. These were cutting edge developments he made accessible to the growing culturally interested audience of Zurich, that otherwise would have missed out on the experience of an opera, because the town lacked a theatre.

The present sonatas were published for the first time in 1804 by Nägeli in his series „Répertoire des Clavicinistes“. It was this collection of contemporary compositions that served as a deliberate contrast to the “Kunstwerke der strengen Schreibart” (“artworks in austere style” [title translated by the author]): a publication of his dating back to the beginnings of his editorial work that contained several works by Bach. Conversely, the series „Répertoire des Clavicinistes“, first published in 1800, told a story permeated by the liberal spirit of the latest developments. Among others the series contained Beethoven`s Waldstein Sonata and Pathètique. In general Liste’s compositions excelled because of their unique formal aspects. He loved to experiment with form as well as with metrics and dynamics, and clearly assumed a special position among his contemporaries. His compositions were often praised in the AMZ (Allgemeine Musikalische Zeitung) and his unique choice of form as well as his attractive style were favorably mentioned in a contemporary review by Ernst Ludwig Gerber in 1813 in the “Lexikon der Tonkünstler”. The greater part of the treasure-trove that is his unpublished compositions is maintained by the Central Library of Zurich.

The Sonata in Es- major offers a surprising introductory sequence in the style of a cadenza. The strong dynamic contrasts and the overly free form that Liste must have chosen deliberately reveal a strong, bold, independent and really emotional character. The first movement Allegro con espressione lacks a secondary theme in the recapitulation. The coda serves as a harmonious transition into the second movement Adagio, reintroducing stylistic elements of the introduction. This ternary movement introduces the unexpected key A-major in the recapitulation instead of the expected C-major and again merges into the next movement. The Presto–movement disposes of numerous changes of tonality, a fact that is uncommon for ternary forms. Right before the coda Prestissimo we are again presented with the liberal style cadenza similar to the introduction. It may be said that those transitions in style of recitative appearing in various sections display the most remarkable feature of the composition.

In the Sonata in G- major, composed as one single movement, Liste opens the scene with a lot of dynamic contrasts, chromatics and enharmonics. The exposition was written in ternary form and introduces the theme No.1 in G- major (mm 39-46), followed by the theme No. 2 in D-major (mm 100-154) and a codetta (mm 155-196). The development features only the primary theme and comes up with a completely new theme starting with measure 293. The recapitulation is ternary just like the exposition and lacks a transition between the primary and secondary theme. What is certainly special about this work is the fact that it was conceived in one movement, its charm being a slim and transparent structure throughout.

Due to their special stylistic and formal features both sonatas deserve proper appreciation and should definitely be reevaluated in the light of a more open-minded criticism beyond traditional schemes of values. They present themselves as an ideal complement to any classical-romantically oriented concert performance, and yet bring challenges to the pianist ready to delve into these unconventional compositions.

Reviews of Klaviersonate in Es-Dur