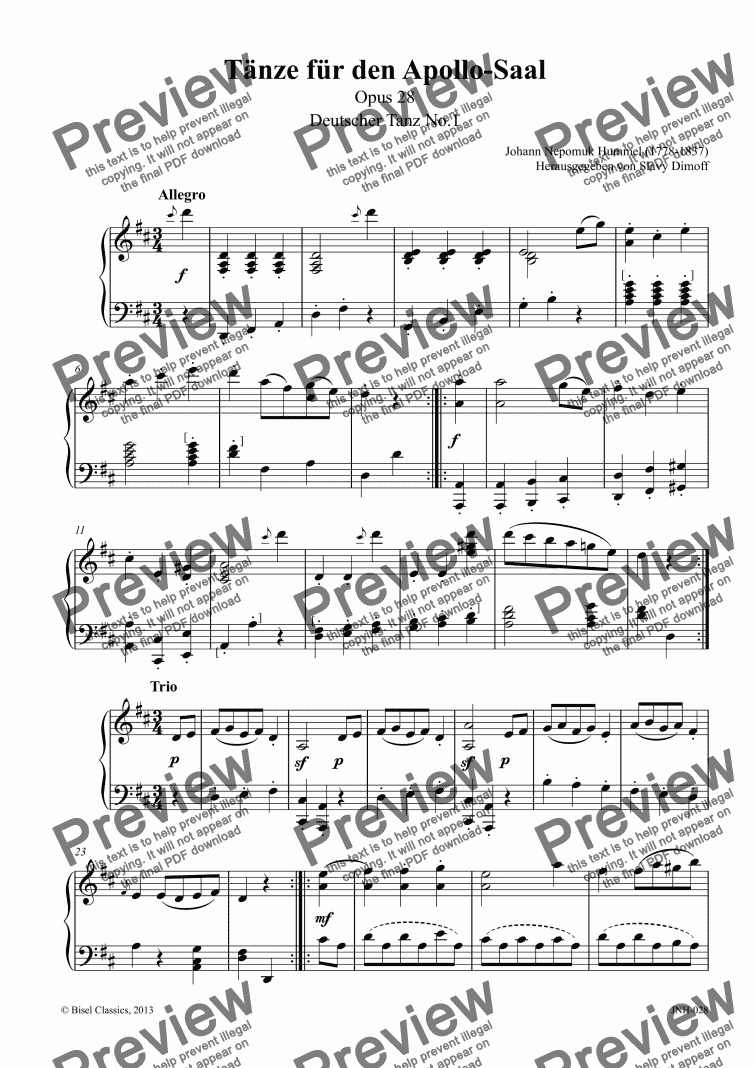 The works of Hummel Op. 27, Op. 28, Op. 31, Op. 39 and Op. 45 have got one thing in common: the title page displays writing in beautifully curved letters: "Tänze für den Apollosaal, komponiert von J.N. Hummel und von ihm selbst für das Pianoforte eingerichtet"[Dances for the Apollosaal, composed by J. N. Hummel and arranged for piano by himself]. The dedication discloses (actually reveals) the most gorgeous and largest amusement hall that ever existed in old Vienna. The Apollosaal became reality thanks to the visions of the factory owner and globetrotter Sigmund Wolfssohn, whose aim it was to raise the level of entertainment culture in Vienna to world class level by establishing a dance hall that was reserved for the upper classes. It was the year of creation of the first dance series Op. 27 (1808) with the opening of the Apollosaal (10th of January) and the Circus de Bach or "Circus Gymnastikus" in the area of the "Wiener Prater" (a trick rider`s hall that served as a predecessor to the operetta stage offering various forms of light entertainment) that was to become a milestone for the development of today`s world famous "classical" Viennese entertainment culture. The following quotation allows a glimpse at the impressive atmosphere loaded with lust and dignified, though ever more decadent merriment, that was obviously significantly enriched by Hummel`s compositions of dance sequences. This was entertainment music on an extremely high level. As concert master at the Eisenstadt Court of Esterházy (a position which he had held since 1804) with its eminent tradition of music making, Hummel was considered an eminent authority concerning the dance forms that moved Vienna in those days. The fact that the use of the Apollosaal was intended for the two social classes of nobility and the ambitious bourgeoisie on different days of the week is another amusing fact that clearly shows how the separation existed in entertainment culture as a mere formality. They performed or danced to the same "Deutsche" [German dances] that were still considered a touch scandalous, withdrew into the same dim booths and drank the same expensive champagne, but saw to it that it was served by attendants wearing different kinds of livery to suit their status.

[Quote translated by the author] Note shown on contemporary advertising boards: "Those indecently dressed and those wearing servant’s caps or corsets as well as servants in livery are not allowed to enter, just as entry is not permitted with spurs or dogs." … the real dimensions of that fairy palace at the Brillantengrund with its unspectacular outside appearance become evident only when we learn that the whole complex consisted of 3 foyers, 5 halls, 31 rooms, 13 apartments and chambers, 3 vestibules, 13 kitchens, 3 cellars and 2 glasshouses, etc. offering room for 6000 guests. The interior decoration was flamboyant to such an extreme, that it would hardly be to anyone`s taste today. In the dance halls there were lanes of spruces, chestnuts and flowering orange trees, that were planted in sinkable buckets. Every corner was decorated with a "mythological figure" of plaster and one room even had a rushing waterfall. The walls were embellished with large-scale murals (the eruption of Vesuvius, the triumph of Apollo), a grotto lured lovers to hide in its discrete semi-darkness, while other halls were ablaze with thousands of lights. In the various dining halls (including a "Roman" and a "Greek" one) seventy servers were waiting tables, subdivided into six classes and wearing six different kinds of liveries. Several bands performed. / The Apollosaal was the meeting point of the "posh minds" of Brillantengrund. A chronicler refers to the ado going on in that establishment: … wealthy, lightheaded sons of factory owners were said to have lighted their pipes with hundred gulden bills and to have played at skittles with champagne bottles."

The five works composed by Hummel in the years after 1808 for the festivities at the Apollosaal comprise a number of dances, and serve as a fascinating testimony to the development of the musical genre of the classical waltz, which was officially born as a dance fashion at the time of the Congress of Vienna (1814/1815). It can be encountered in its earlier variants en route to its formation. The complete variety of dance culture in enlightened Vienna can be found in these works: starting with the courtly ’Minuet’ (the 12 ’Minuets’ of Op. 27, the 6 ’Minuets’ of Op. 31 and Op. 45 as well as the 6 ’Minuets’ of Op. 39) continuing to the scandalous ’German Dance’ (the 12 ’German Dances’ of Op. 28, the 6 of Op. 31 as well as the 4 of Op. 39 and the 6 of Op. 45) alongside the obligatory ’Trios’ that follow and several versions of ’Coda’ as well as one ’Introduction’ (that was later to be considered typical for the classical waltz).

The name of the "Deutscher Tanz" [German dance] developed from a court dance common between the 16th and the 18th centuries, the "allemande" (French for "German"). It consisted of a slow first dance followed by a faster second dance in triple time that developed into the "German dance" in the second half of the 18th century. As it was a couples dance with both partners in close body contact (considering the sentiments of the period), and because indecent moves were frequently observed, a dance ban was issued for the "Deutscher" by the authorities of Bavaria in1772. Reserved for the lower classes, the "German dance" was officially accepted in Vienna with its upcoming bourgeoisie in 1790. The enlightened Duke of Falkenstein (Joseph II, 1741 - 1790) finally completely legitimized it as a fashionable dance accepted at the Habsburg Court and commissioned "German dances" for the balls at the Redoutensaal dancehalls with the most outstanding composers of the time. As a consequence the waltz developed as one of the most popular ballroom dances of the 19th century. At the beginning waltzes were still named "German dances", and even Schubert would later use the terms interchangeably. Quite often the "German dance" was also used as table music or folk dance.

The dances that Hummel composed for the parties at the Apollosaal in between the years 1808 and 1811 do actually contain quite a few quotes of popular works of the period as well as hints about the performance of certain parts on particular solo instruments, having a mere inspirational function here in the piano part. The complete orchestra version must have had solo parts of post horn, trumpet, harp, horn, violin and even sleigh bells (in the third German Dance of Op. 45). It is interesting to mention the ’Introduction’ that was to become a typical feature of the classical waltz (Marcia con moto).

The ’German Dance’ No.9 of Op. 28 refers to a ballet (Helena and Paris, Op. 26) composed by Hummel himself in 1807 to a choreography by Cavalli for the Vienna State Theatre. The last ’German Dance’ and the ’Trio’ of Op. 31 (the dances for the year 1809) contains a mythological quote that perfectly suits the ambience of the Apollosaal: the Cyclopes make their entrance in gigantic parallel octaves stomping away, while the hurdy-gurdy man follows with his drone.

The ’German Dance’ No.4 Op. 39 surprises with a vocal number for two tenors and two basses, with a convincing "tra-la-la" that is bound to make everyone happy. The subsequent ’Coda’ part conveys an opulent atmospheric picture of the magical event of the eruption of the Vesuvius. It is said that a gigantic painting of the same subject matter decorated one of the halls, so that the music eventually mirrored the story told by the decoration. The ’Trio’ following the first ’Minuet’ of the same work (Op. 39) quotes a ballad opera by Josef Weigl immensely popular at the time: "Die Schweizer Familie" [The Swiss Family] had first been staged March 14, 1809 (two years prior to the creation of Op. 39) at the Kärntnertortheater. Soon Hummel would create another series of dances for Apollosaal (Op. 91) that already displayed the title "new" waltzes and trios, and featured another "large battle - coda"

In those days it was quite common to create diminutions for piano two hands, or for piano duets, of works that had initially been intended for a large orchestra. Today the pieces are ideal as literature for students or as stage music, maybe also just for “domestic use". One is sure to encounter amusing and entertaining moments when playing, and there may also be someone around who feels inspired to dance. There may even be a remote chance for free entry by way of time travel into the Apollosaal (that regrettably went up in flames on January 27, 1876).