The Never Ending Overture - a musical joke for Concert Band

By: Musik: Verschiedene große Komponisten
For: Concert band / wind band
This music is in your basket
View basket
Loading... 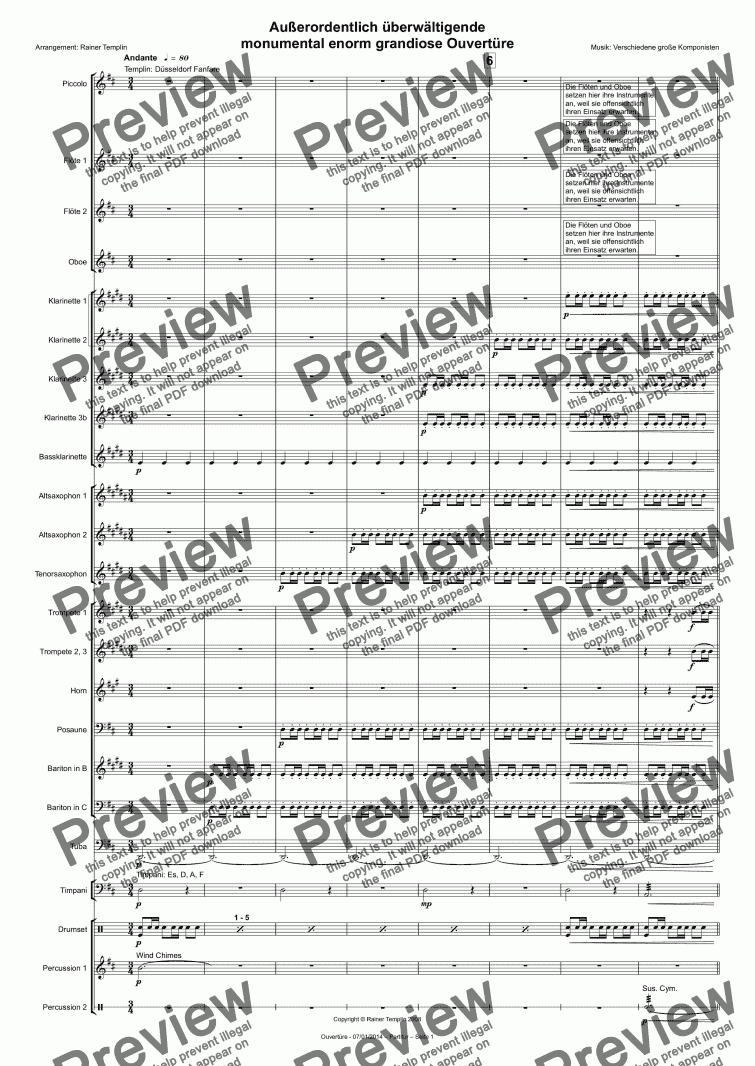 The Never Ending Overture - a musical joke for Concert Band

Composer
Musik: Verschiedene große Komponisten
Arranger
Rainer Templin
Publisher
Herr
Difficulty
Difficult (Grades 7+)
Duration
7 minutes
Genre
Other and Classical music
License details
For anything not permitted by the above licence then you should contact the publisher first to obtain permission.

While you listen to the MP3 file it is highly recommended to read whats happening during this overture:

At the beginning all of the orchestra - except the flutes and oboes - start an impressive opening with the famous Templin: Fanfare (worldwide known in Düsseldorf, Germany).

The flutes and the oboes are protesting because they want to join in too. (They lift protest signs with something like: "Clarinets are burning longer!" written on it …) Finally they succeed and are allowed to play too.

And what are they playing? A harmless bavarian Ländler. The clarinets laugh at the flutes by imitating their harmless melody and lead over to the grandiose Tschaikowski: Piano Concerto …

Again the flutes are not allowed to join in and they start discussing among each other. Finally the first flutist stands up, goes to the conductor and tells him about the protest of his section. The conductor stops the orchestra and lets the flutes play their suggestion:

So they start playing Haydn’s: Surprise Symphony. This seems to be ok for the rest of the orchestra and everybody joins in. Except the percussion section. They are not allowed. Not even to play the first kettle drum stroke. Now they start discussing, protesting and threatening with their mallets from behind. Finally they "play" the second kettle drum stroke all together with an earsplitting "BANG!!!".

Nobody is able to continue playing. Only the percussion group. They start playing a "conversation" in their group that ends up in Mendelssohn’s Wedding March where everybody is joining in and joyfully playing until it ends with some big final chords. Ending? Finale?

As soon as the applause starts and the conductor turns around, his bowing towards the audience is taken as the start signal for the orchestra to continue playing on their own. Without conductor: Liszt: Les Preludes.

The conductor surrenders and conducts the Preludes to it’s glorious ending. Ending?

Again, as the conductor turns around to bow, the solo clarinet player stands up to conduct the orchestra and brings it to start playing Tschaikowski: Ouverture 1812. After fighting a bit with the conductor the clarinet player surrenders the baton and gets back to his seat. So this overwhelming music finally leads to a monumental finale of this never ending overture after 07:30 minutes.

Sorry, there's no reviews of this score yet. Please .
In order to submit this score to ScoreExchange.com Rainer Templin has declared that they own the copyright to this work in its entirety or that they have been granted permission from the copyright holder to use their work. If you believe that this score should be not available here because it infringes your or someone elses copyright, please report this score using the copyright abuse form.