By: ELSOM
For: Brass band
This music is in your basket
View basket
Loading... 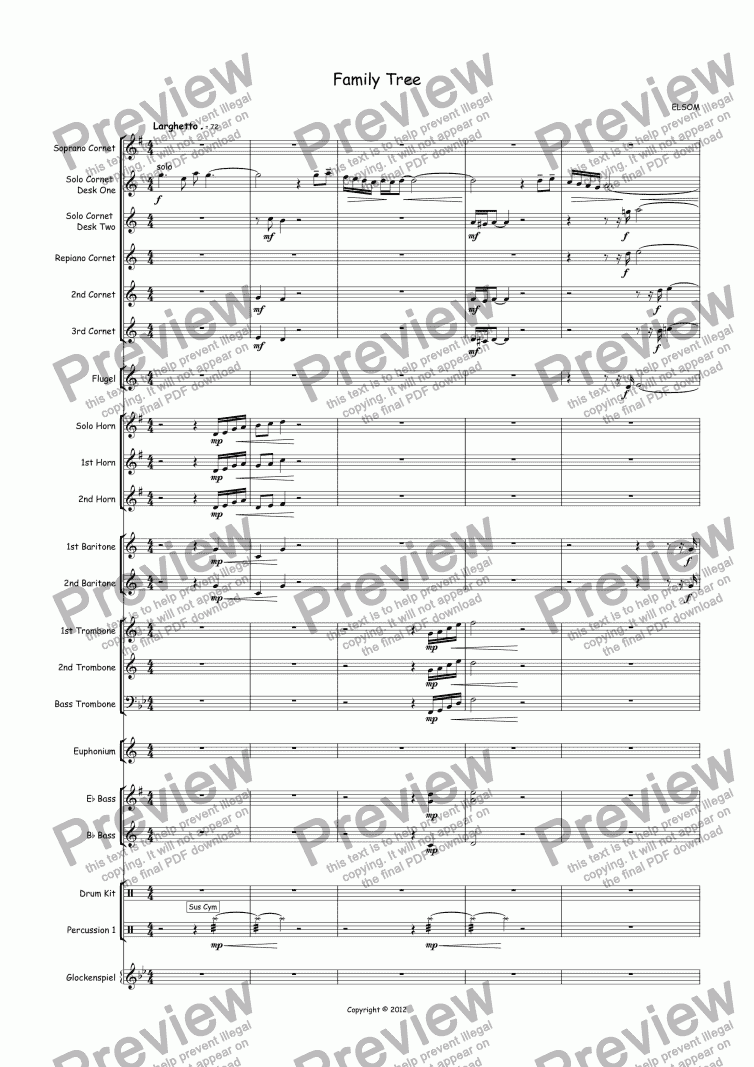 By: ELSOM
For: Brass band

Composer
ELSOM
Year of composition
2012
Publisher
Will Elsom
Difficulty
Moderate (Grades 4-6)
Duration
6 minutes
Genre
Modern classical music
License details
For anything not permitted by the above licence then you should contact the publisher first to obtain permission.

FAMILY TREE This piece is intended to depict various members of my family line on the paternal side, all entwined around various statements of a love theme built around the Georgian word, “Genetsvalay”, which is loosely (but inadequately) translated as ‘beloved’. Genetsvalay is introduced by the cornet soloist, with a secondary theme introduced by the Flugel and Euphoniums (Bar 8).

Bar 16 depicts a sea voyage of Captain John Francis Cull. The second time through, with crashing cymbals and fog horn blasts from the trombones depicts a rougher passage of travel. Cull was reputed to have been the youngest captain to take a ship out of the Pool of London. The flipside of this is that he was allegedly sent away on the ship by his wealthy sea magnate of a father, having been found dipping into the pockets of his father’s guests at a society gathering. The trip abroad, some five years, was given to him in the hope that the fuss would have died down by the time he got back to London – if he got back. Recent research rather debunks both elements of this tale, however, the legend is better perhaps than the truth.

After a recap of Genetsvalay, the theme for the ‘Reputable’ Cockney is stated (Bar 42). Fairly noble in its statement, it depicts Francis Wayman Elsom’s apparent good standing in the community. Less known was his darker side, (50-58) like his sudden midweek changes of job. According to my late paternal Grandmother (Francis’s wife, Margaret, 1901 -2000) he came home at lunchtime on a Wednesday, to announce he had been given two weeks’ notice. (“Don’t worry love, I’ll get a new job in the morning!” Which he did.) There were two odd things about this. (1) People generally got laid off and given paid notice on a Friday, not a Wednesday, and (2) Generally, in 1936 or 1937 would not be given an £800 bonus when laid off. Granny was of the view that the £800 ‘bonus’ was the missing money he had been sacked for…

Goliath (bar 72) depicts my dad, Kenneth Bernard Patrick Elsom (1932-1977). A well respected teacher, his height was such that a teacher friend of his convinced him to lie down on the floor so the children in the school could draw around him to depict David’s Goliath. Many moons later, when I got to secondary school, the pupils from dad’s old school declared I was the kid with “the eight foot dad”. I guess, to a seven year old, 6 foot 4 and three quarter inches may as well have been eight foot! Bars 80 to 99 depicts a teacher imparting information, the simplistic first attempt at understanding, then a better stab whilst others are grasping it, then everyone getting it whilst the teacher joins back into the discussions.

TNG is The Next Generation, and is the shortest of the movements as it depicts the young life of my offspring. It playfully recaps the first movement, and depicts childhood curiosity at Bar 112.

Thank you to: My wife, Nino, for being the inspiration behind the love theme, and my daughter Mary, for bringing us joy every day; Mum, Mary Monica Elsom (1931-2009) whom I still miss dreadfully. As a teacher at Newham Academy of Music noted, “They broke the mould after making her, didn’t they?” Yes, they did. Mum definitely had musical bones. She could sing, and took grade 5 theory at the age of 55, to prove that you could teach older pupils the rudiments of music; Dad (1932-1977), depicted herein. He inspired my sporting prowess, though was a fairly good singer as well; Helen (1957-2009) for wise words as I got to know her better later in her life; Brother Thomas for suggesting a generational piece. It was from that idea that the Family Tree grew. His idea for depicting the myriad styles of music imported into the East End of London since the turn of the 20th Century may yet see the light of day, if he doesn’t beat me to it…; Giles and Fen, Bernard, Owen and Margaret for discussions around the family tree; placing the characters to the correct generation etc; Facebook friends who suggested various ideas for a new piece when I was repeatedly drawing a blank; Paul Weston, for giving me a musical second chance; Colin Huckle for being as close a thing to a dad that a cricketing mentor can be.