Sign in / Register
HomeInstrumentationsString quintetString Quintet No. 1 in A Major, "Spring": II. Scherzo

String Quintet No. 1 in A Major, "Spring": II. Scherzo 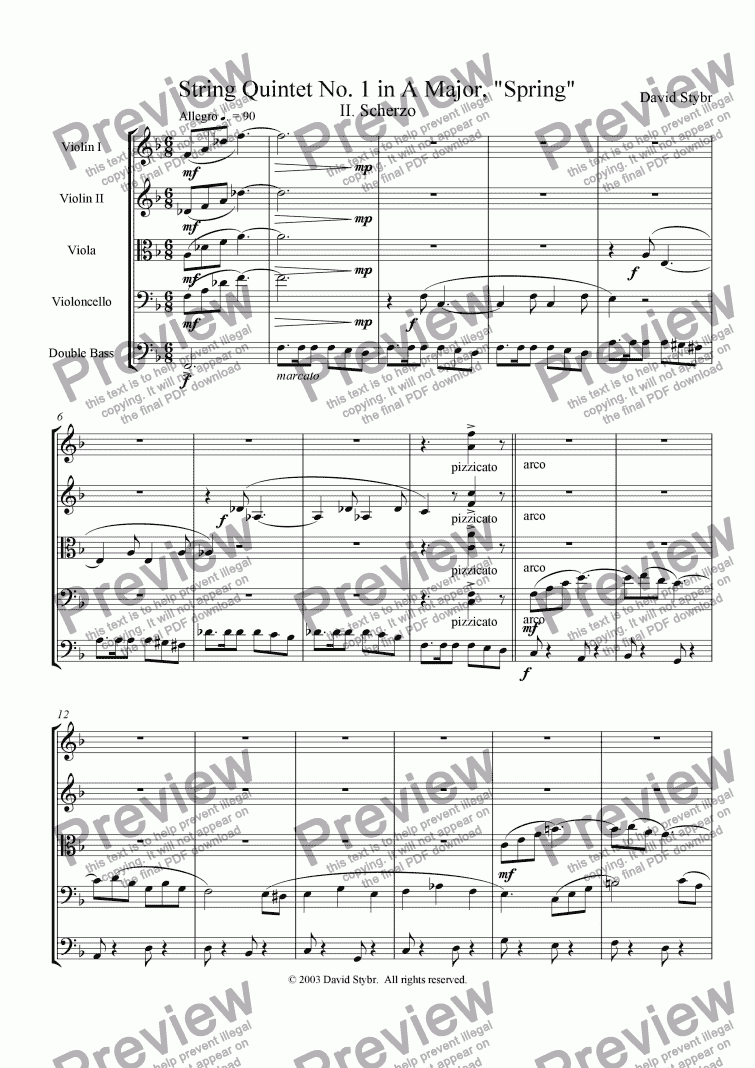 Commentary by Left Brain and Right Brain. RB: "In January and February, an engineering project found me in Harrison, Arkansas, which helped me avoid an Illinois snowstorm or two. Harrison is in the beautiful Ozark Mountains south of that Midwest music mecca: Branson, Missouri. Most performers were on vacation though, so Branson was empty, and I missed the World's Largest Banjo. Anyway I doubt that banjos influenced the pizzicato sections of my Scherzo." LB: "The Ozark Mountains received their name from the early French explorers. A river with many bends was named 'La Rivi?re Aux Arcs', and 'Aux Arcs' became 'Ozarks' in English." RB: "Whateverrrr. The Scherzo isn't what it seems, or even seems to seem. The jaunty 6/8 Scherzo theme in F Major rolls in as a fugato/canon hybrid, followed by a closing episode. Or is it? A literal repeat begins, but that darn pseudo-closing episode barges into the counterpoint! The real closing episode is a fully-harmonized statement of the Scherzo theme. Pizzicato double-tone scales, based on the 3 main tonic notes of my String Quintet No. 1, then careen into the Trio." LB: "The Trio begins as a duet for viola and double bass, then literally a trio for viola, cello and double bass. The heartfelt melody is then repeated by the 2 violins, above a soaring duplet cello countermelody based on Theme I of the first movement. The Scherzo returns, but without repeats, and entirely pizzicato. This piece was completed in February 2003."

Reviews of String Quintet No. 1 in A Major, "Spring": II. Scherzo