By: TIM NEW
For: Duet of Flutes
This music is in your basket
View basket
Loading... 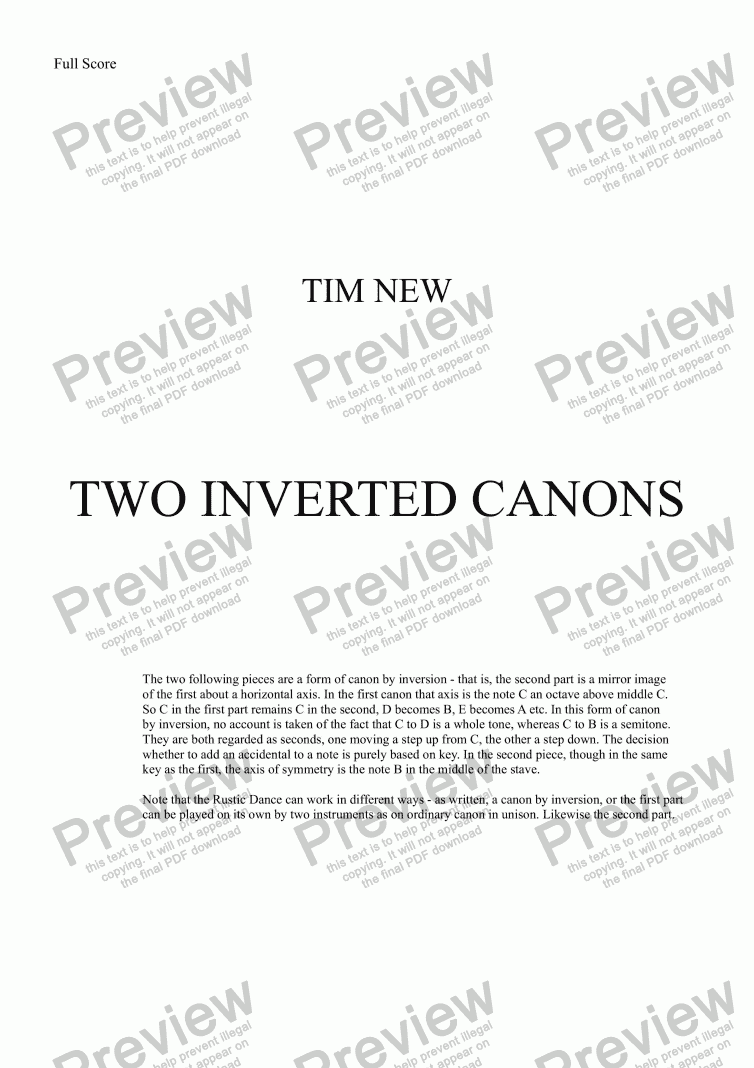 By: TIM NEW
For: Duet of Flutes

Composer
TIM NEW
Year of composition
2014
Publisher
tim new
Difficulty
Moderate (Grades 4-6)
Duration
2 minutes
Genre
Classical music
License details
For anything not permitted by the above licence then you should contact the publisher first to obtain permission.

These are two pieces are a form of canon by inversion - that is, the second part is a mirror image of the first about a horizontal axis. In the Rustic Dance, that axis is the note C an octave above middle C. So C in the first part remains C in the second, D becomes B, E becomes A etc. In this form of canon by inversion, no account is taken of the fact that C to D is a Whole tone, whereas C to B is a semitone. They are both regarded as seconds, one moving a step up from C, the other a step down. The decision whether to add an accidental to a note is purely based on key.

I've written many different forms of canon, all of which are tricky to write, and canon by inversion is the hardest. In all my canons I try to maintain some melodic shape, and usually try to involve some modulation, even if it's only minor to relative major. Often canons are either very repetitive, or rambling, though those by Telemann in particular are a striking exception. I hope you enjoy my efforts!

Note that the Rustic Dance can work in different ways - as written, (a canon by inversion) or the first part can be played on its own by two instruments as an ordinary canon in unison. Likewise the second part.

Do listen to the mp3 to get a better idea of how it sounds. The canons can be played on any two like treble instruments.