By: Charles-François Gounod
For: Brass quintet
This music is in your basket
View basket
Loading... 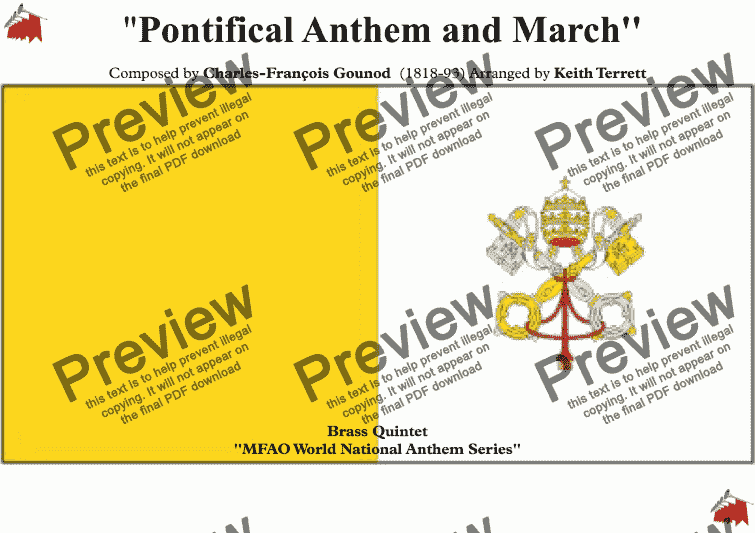 By: Charles-François Gounod
For: Brass quintet

Composer
Charles-François Gounod
Year of composition
1869
Arranger
Keith Terrett
Year of arrangement
2014
Publisher
Music for all Occasions
Difficulty
Moderate (Grades 4-6)
Duration
3 minutes
Genre
Classical music
License details
For anything not permitted by the above licence then you should contact the publisher first to obtain permission.

The Pontifical Anthem and March (Italian: Inno e Marcia Pontificale), also known as the Papal Anthem, is the anthem played to mark the presence of the Pope or one of his representatives, such as a nuncio, and on other solemn occasions. When the Vatican’s flag is ceremonially raised, only the first eight bars are played.

While the Papal Anthem also serves as the national anthem of the Holy See and the Vatican City State, the Vatican stresses that it "is not to be understood as a national anthem"; it is a composition whose words and music "speak to the heart of many throughout the world who see in Rome the See of Peter."

Vatican City State has its own flag and anthem like any other universally recognized, sovereign nation. On 16 October 1949 Pope Pius XII decided that Charles Gounod’s (1818-1893) Pontifical March should become the official hymn. At the time, the French musician and devout Catholic was already a famous composer, especially well known for his lyrical work Faust and his composition of Ave Maria.

The music was composed in 1869 by Charles Gounod, for the celebration on April 11, 1869 of Pope Pius IX’s golden jubilee of priestly ordination. The purely instrumental piece in three parts, originally called Marche pontificale (French for "Pontifical March"), became extremely popular from its first performance.

On October 16, 1949, Pope Pius XII declared it the papal anthem, replacing Viktorin Hallmayer’s Marcia trionfale (1857), which, being still the papal anthem when the Vatican City State was founded in 1929, had been treated also as the new state’s anthem. Gounod’s Marche Pontificale was first performed in this new role during a ceremony on Christmas Eve of 1949, one day before the opening of the Holy Year 1950. The old anthem too was played for a last time, almost as a token of respect.

At that time, Antonio Allegra (1905–1969), who was then one of the organists of St. Peter’s Basilica, wrote Italian lyrics for Gounod’s music. Other lyrics have been composed for the music in various languages and by different authors. Some of these versions are not directly related to the papacy, e.g. Rudy Villanueva’s Cebuano prayer, Yutang Tabonon ("Beloved Land"), for protection for the Philippines nation. In 1991, Raffaello Lavagna of Savona (born 1918) wrote Latin lyrics for a four-voice choir, on an arrangement by Alberico Vitalini.

The Pontifical Hymn: The music of the current Pontifical Hymn was composed by Gounod for the anniversary of the incoronation of Blessed Pope Pius IX to whom he was particularly devoted. The Pontifical March was performed for the first time on the afternoon of 11 April 1869 during celebrations marking the Pope’s jubilee of priestly ordination. On that day in St. Peter’s Square a large crowd had gathered for a special concert following the morning’s liturgical celebrations in the Basilica. The concert brought together seven pontifical bands with members belonging to seven different papal corps and regiments in Rome (Papal Gendarmes conducted by maestro Roland, Reggimenti di Linea conducted by maestro Baffo, Cacciatori conducted by Pezzina, Zuavi conducted by maestro Willimburg, Carabinieri stationed outside Italy, Legione Romana conducted by maestro Angelini, Reggimento Dragoni). They were accompanied by a chorus made up of over one thousand soldiers. The Pontifical March of Gounod was widely applauded and played numerous times, as the Vatican newspaper L’Osservatore Romano reported the following day.

Pope Pius IX received the greetings of numerous diplomats gathered in St. Peter’s Basilica with the five thousand faithful for the morning celebration. Later in the day, he appeared at the central loggia of St. Peter’s Basilica to greet the crowds applauding below and filling the square for the concert. The seven musical bands were lined up along the steps in the square and when the Pope appeared they began with “the new hymn written especially for the occasion by maestro Gounod and to be accompanied by a chorus of one thousand soldiers”, as announced by the Vatican newspaper the day before. In the past, whenever the Pope would appear, the bands would play the Triumphal March, the old anthem composed by Hallmayer. The new composition was immensely successful. On 12 April 1869 the Vatican newspaper reported that “the anthem was played again and again numerous times”. It was performed often after this event and became famous for its majesty and solemnity, almost of a liturgical character. However, it was only adopted as the official Pontifical Hymn 81 years later, even though many had wished it were done so immediately.

The Pontifical Hymn of Gounod, which was officially adopted on the eve of the Holy Year 1950, is quite different from the previous anthem composed by Hallmayer and reflects a style of that period consisting of a lively and bright rhythm, like that of a waltz. Pope Pius XII decided to change the anthem with the still well known Pontifical March of Gounod, given its religious tone thought to be more appropriate for the times. The music was performed for the first time as the new, official anthem during a solemn ceremony on Christmas Eve of 1949 which was also the vigil of the opening of the Holy Year 1950. The old anthem was also played almost as a sign of respect to mark its passing. The musical band of the Palatine Guard of Honor was lined up with all its divisions in the San Damaso Courtyard and performed the music after the order of the day was read out announcing the official change in anthem. The Palatine Guard of Honor was later disolved by Pope Paul VI along with the other corps of armed guards in the Vatican, except for the Pontifical Swiss Guard.

Today the Pontifical Hymn of Gounod is performed by a civilian band during the most solemn occasions concerning the life of Vatican City State and during ceremonies in which the Holy Father or one of his representatives is present.

It is important to underscore that the Pontifical Hymn is not to be understood as a national anthem. The words of maestro Antonio Allegra and maestro Raffaello Lavagna speak to the heart of many throughout the world who see in Rome the See of Peter.

The compositional and musical characteristics which make Gounod’s Pontifical Hymn so famously evocative were described by maestro Antonino De Luca, Director of the Palatine Band in the February 1950 issue of Vita Palatina with the following words: “The Pontifical March of Gounod, which reveals the strong personality of the author of Faust, is a composition with an andamento maestoso. The first part in F major begins with a well chosen sound of the trumpet, after which the entire orchestra joins in, signifying and underscoring an atmosphere of calm grandiosity. The second part, instead, has a new feeling of profound religiosity which comes from sense of spiritual primacy. The third part begins with a fortissimo which marks an almost urgent detachment from every earthly concern.”

The Lyrics of the Pontifical Hymn

When Gounod’s hymn was officially adopted in 1949, Msgr. Antonio Allegra (1905-1969), one of the organist’s of St. Peter’s Basilica at the time, composed a text in Italian, today commonly sung, beginning with the words “O Rome Immortal of Martyrs and Saints”. Interestingly, the Pontifical Hymn never had lyrics in Latin. However, to make it possible for the faithful around the world to participate in singing it using a more common language, a Latin text was created for Gounod’s Pontifical Hymn which begins with “O felix Roma – o Roma nobilis”, written by the Msgr. Raffaello Lavagna (1918-…), a Canon from Savona, Italy. The author found as inspiration for the text the many verses found in scripture referring to St. Peter. The Hymn with these new lyrics was performed for the first time in private by the Iubilate Deo chorus directed by Sr. Dolores Aguirre on 15 June 1991 in the presence of the Pope John Paul II during his visit to the Santa Maria di Galeria Broadcast Center of Vatican Radio, marking its 60th anniversary that year. The first public performance took place on 16 October 1993 in the Paul VI Hall in the Vatican. It was played by the chorus and orchestra of Mitteldeutscher Rundfunk of Leipzig, Germany, as part of the celebrations to mark the 15th anniversary of the election of John Paul II and the 100th anniversary of the death of Charles Gounod.