By: Composed by Cheng Mao-yan Arranged by Keith Terrett
For: Brass quintet
This music is in your basket
View basket
Loading... 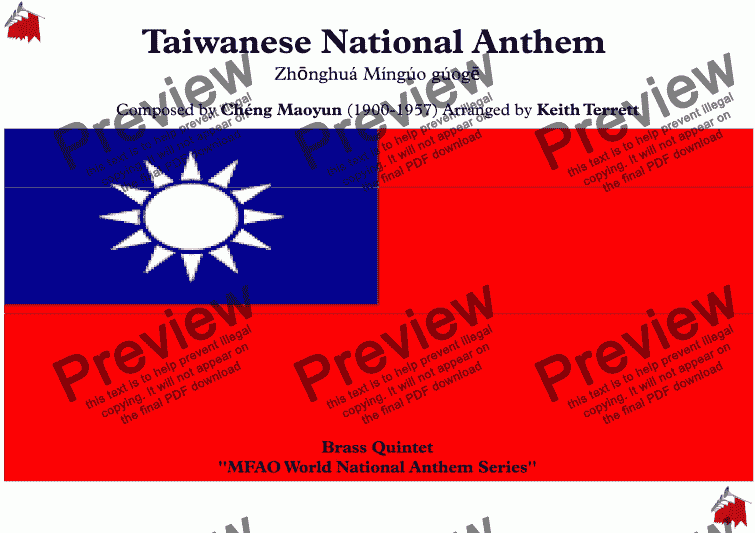 By: Composed by Cheng Mao-yan Arranged by Keith Terrett
For: Brass quintet

Composer
Composed by Cheng Mao-yan Arranged by Keith Terrett
Arranger
Keith Terrett
Publisher
Music for all Occasions
Difficulty
Easy (Grades 1-3)
Duration
1 minute
Genre
World music
License details
For anything not permitted by the above licence then you should contact the publisher first to obtain permission.

The national anthem of Taiwan arranged for Brass Quintet.

Cheng Maoyun (Chinese: 程懋筠; pinyin: Chéng Màoyún; Wade–Giles: Ch’eng Mao-yün), 25 Aug 1900 - 31 Jul 1957) was a Chinese composer and a professor at National Central University and Hangzhou Societal University (杭州社會大學). He composed the "National Anthem of the Republic of China". He was born in Xinjian (新建), Jiangxi to a family of officials. He studied music in Jiangxi Provincial Higher Normal School (江西省立高等师范学校 Jiāngxī shěnglì gāoděng shīfàn xuéxiào), and the Ueno Music Academy (上野音樂學院) in Tokyo. He majored in violin, then music theory, and composition. In 1928, his submission of the melody of "Three Principles of the People" was chosen. In 1947, he travelled to Taiwan for the first time, where Hsiao Er-hua (蕭而化 Xiāo Érhuà), head of the College of Music in the Taiwan Provincial Normal University, offered Cheng Maoyun a position, but he refused. He never returned to Taiwan again. He had a stroke in 1951 in Xi’an, and he died of second stroke July 31, 1957.[1] The official university song of the National Central University, now on Taiwan, is also composed by Cheng. His wife and son are also musicians. Zhang Yongzhen (张咏真), Cheng’s wife, is a piano professor at the Xi’an Music Academy. His son, Zhang Jiannan (张坚男) (born 1945) is a composer.

"Zhōnghuá Míngúo gúogē" is the national anthem of the Republic of China (ROC). It discusses how the vision and hopes of a new nation and its people can and should be achieved and maintained using the Three Principles of the People.

The text of "National Anthem of the Republic of China" was the collaboration between several Kuomintang (KMT) members, Hu Han-min (胡漢民 Hú Hànmín), Tai Chi-t’ao (戴季陶; Dài Jìtáo), Liao Chung-k’ai (廖仲愷 Liáo Zhòngkǎi) Shao Yüan-ch’ung (邵元沖 Shào Yuánchōng). The text debuted on July 16, 1924 as the opening of a speech by Sun Yat-sen at the opening ceremony of the Whampoa Military Academy. After the success of the Northern Expedition, the Kuomintang chose the text to be its party anthem and publicly solicited for accompanying music. Ch’eng Mao-yün (程懋筠; Chéng Màoyún) won in a contest of 139 participants. On March 24, 1930, numerous Kuomintang members proposed to use the speech by Sun as the lyrics to the national anthem. Due to opposition over using a symbol of a political party to represent the entire nation, the National Anthem Editing and Research Committee (國歌編製研究委員會) was set up, which endorsed the KMT party song. On June 3, 1937, the Central Standing Committee (中央常務委員會) approved the proposal, and in 1943, the song officially became the national anthem of the Republic of China.